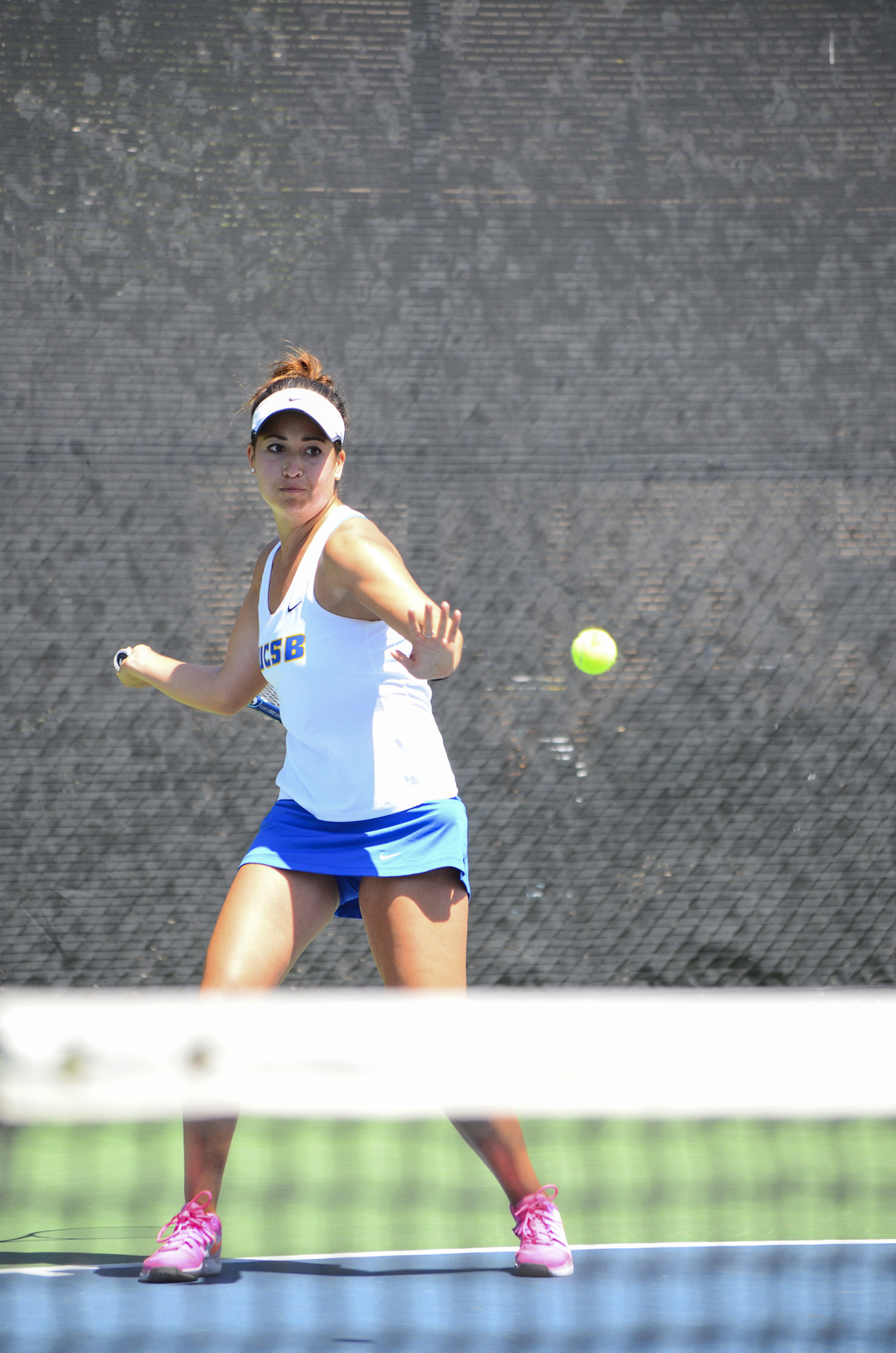 The No. 63 UCSB women’s team beat rival Cal Poly this weekend 4-0, before heading into the Big West Tournament next Thursday.

With this win the Gauchos’ overall record is now 14-8, with a conference record of 6-2.  The Mustangs are now at 0-7 on conference play, failing to register a conference win during the regular season.

The Gauchos were off to a fast start against Cal Poly, taking the doubles point with two quick wins on the No. 2 and No. 3 courts.  On the No. 2 court, freshmen pair Natalie Da Silveria and Lou Adler defeated Emily Gibbens and Hannah Stone 8-3.

One spot below, senior Stacy Yam and sophomore Jaimee Gilbertson took down the Mustangs’ Zoe Oedekerk and Molly Reed 8-4.  The doubles pair started off poorly losing three unanswered games.  They quickly turned the match around, eventually bringing things level at 4-4 before winning the match 8-4.  In a turning point in the match, Yam ran along the baseline returning every hit sent her way before making her way towards the net to join Gilbertson, who smashed the ball down for the win.

Santa Barbara found similar success in the singles competition, winning three matches on the No 1, No. 2, and No. 4 court before the game was called off, as the match became impossible for Cal Poly to win. Baker was first off, taking down Stone 6-4, 6-4 on the No. 4 court.

Three singles matches went unfinished, with Gilbertson ending in her third set against Molly Reed at a score of 3-6, 6-4, 1-0 on the No. 3 court.  Yam finished 6-4, 5-0 against Oedekerk on the No. 5 court, with senior April Scatliffe finishing 7-6 against Sayaka Tsugai on the No. 6 court.

“I’m so proud of Stacy and April,” Gilbertson said. “I’m really looking forward to playing alongside them for one of the last times next week.”

The seniors on the team received recognition after the doubles competition, with Head Coach Simon Thibodeau honoring the veterans he has worked with over the past few years.  Thibodeau started off talking about Yam, congratulating her for being one of the most improved players over his time in Santa Barbara, as she was named the most improved player on the team back in 2013.

Scatliffe was also recognized, with Thibodeau discussing her love for the game, as well as her love for her Teammates.  He also highlighted her academic achievement during her time at UCSB, where she has been a Big West Scholar, while boasting the highest G.P.A on the team at 3.6 in Communications Studies.

UCSB will play in the Big West Tournament at Indian Wells California this Thursday.