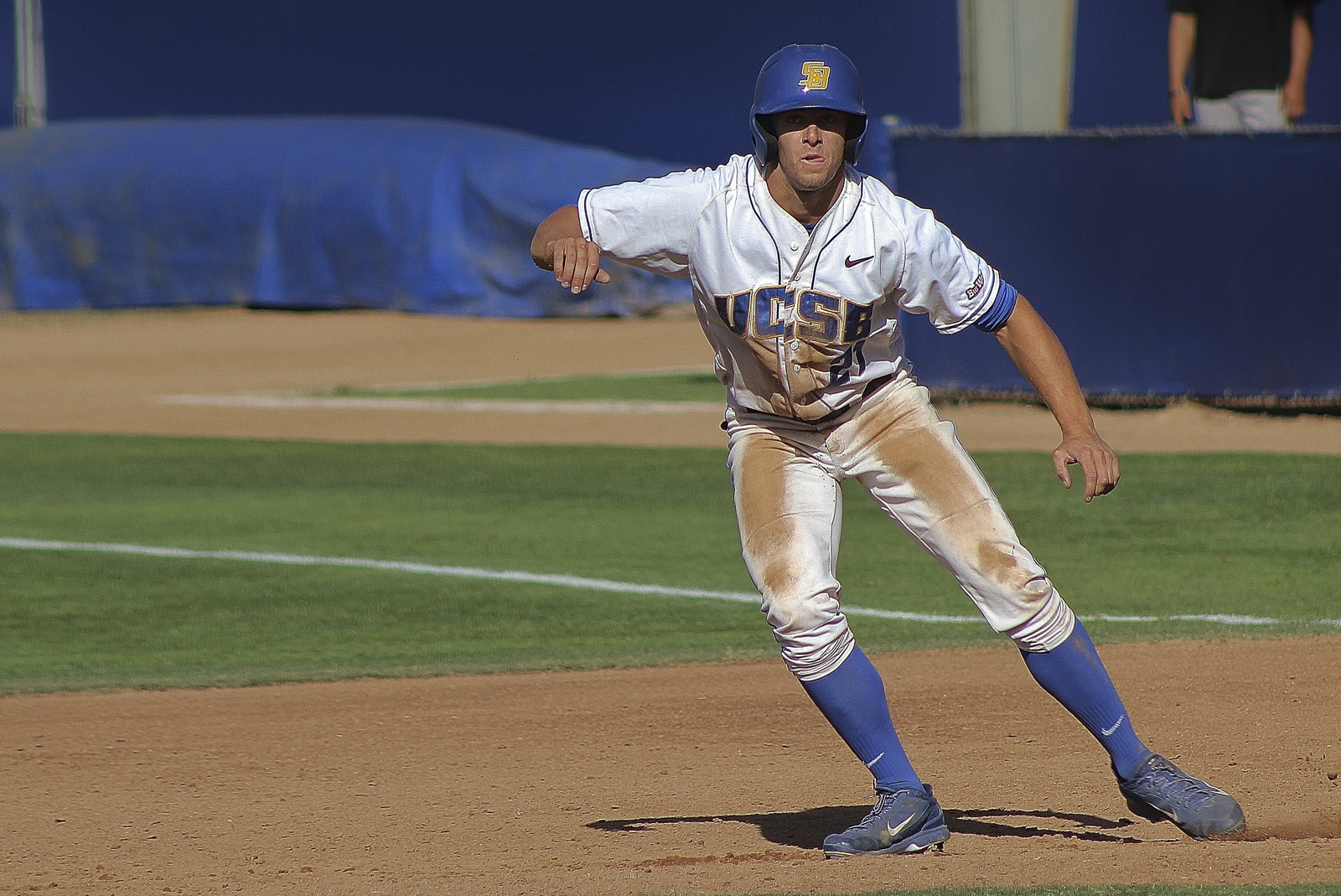 Andrew Calica leads off of first base. Jose Ochoa/Daily Nexus

The UCSB baseball team went 2-1 in a three-game series against rival Cal Poly, closing out the weekend with a 7-3 win over the Mustangs.

Coming out strong in the first game, the Gauchos pulled a close 8-7 win over Cal Poly, but dropped the second game of the series 4-3 before heading into Sunday’s game. This weekend leaves the Gauchos at 28-9 overall and 6-3 in the Big West. UCSB now holds the second spot in the conference behind Irvine.

With a pair of losses added to its record this weekend, Cal Poly falls to 16-20 overall and 5-4 in conference play. The Mustangs are currently ranked fifth in the Big West.

At the mound during Sunday’s win was junior lefty Domenic Mazza who collected his fifth win of the season. In his eight innings pitched, he allowed five hits for two runs and recorded eight strikeouts before turning the ball over to junior righty Robby Nesovic for a one-inning close.

In wake of junior first baseman Dalton Kelly’s broken leg, the Gauchos have started Nesovic at first in all three games this series. The designated hitter spot of the lineup was filled by sophomore infielder Billy Frederich in two of the games this weekend.

In Sunday’s game, the Gaucho offense put up 14 hits, left 11 on base and only struck out three times. Nesovic went 4-5 with two RBIs and senior left fielder Cameron Newell went 3-4 with one RBI.

Sophomore righty Shane Bieber started in Saturday’s loss and is now 5-3 for the season. In his 6.1 innings pitched, Bieber allowed 12 hits for four runs and struck out four. The winning pitcher in Saturday’s match, freshman lefty Kyle Smith went through 8.1 innings and held the Gauchos to six hits and three runs, striking out five.

Of the six total Gaucho hits on Saturday, freshman infielder Clay Fisher accounted for two, including one RBI. RS senior outfielder Scott Quinlan started at DH and accounted for the other RBI.

Both teams came out strong in the series opener on Friday as UCSB put up 15 hits, compared to Cal Poly’s 10. UCSB took an early two-run lead in the first, but the Mustangs retaliated with a six-run top of the second against UCSB starter, senior lefty Justin Jacome.

After one more run scored by the Gauchos in the third, the game went scoreless for three full innings. Then in the bottom of the eighth, the Gauchos had an explosive five-run inning to put them up 8-6. Cal Poly’s late one-run top of the ninth was not enough to secure a chance at extra innings, and the Gauchos took the game.

Jacome went through 7.1 innings in his start on Friday, allowing 10 hits for six runs and striking out five. Freshman lefty Kyle Nelson was recorded as the game’s winning pitcher for his 0.2 inning appearance, before Nesovic closed for his sixth save.

Next week, the Gauchos continue their home stand with a mid-week Tuesday game against Pepperdine followed by a trip to face Big West’s Hawai’i for a three-game series starting on Friday.