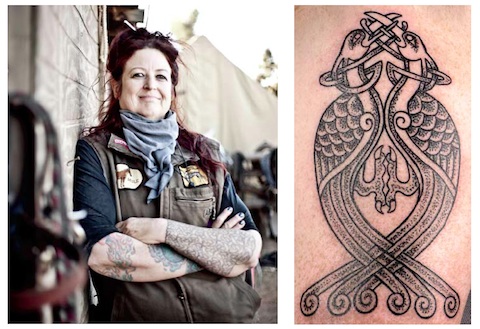 The SRB welcomed renowned tattoo artist Pat Fish on the evening of Tuesday, April 7 to talk about her love of tattooing. From her affinity for Celtic designs to the highs and lows of tattoo trends in recent years, Fish has a genuine love for what she does and isn’t afraid to let it be known.

Fish graduated from UCSB in 1979 with degrees in art and film, but found herself always gravitating towards art. She had always enjoyed drawing from a very young age and soon decided it was something she wanted to pursue. However, breaking into the world of body art as woman was not an easy task. There were roadblocks of self-doubt, but ultimately Fish decided that tattooing would be her new career. She would take it as seriously as possible, and seek a mentor.

Fish soon met the artist that would make her their apprentice. Cliff Raven was a gay tattoo artist who had no problem teaching a woman his craft in a time when female tattoo artists were almost unheard of, and the two got down to business. With the help of Raven, Fish perfected Celtic designs and began her own tattoo business.

Throughout her thirty-plus years in the business, Fish has seen many trends come and go. When she began, Japanese symbols were all the rage. This puzzled Fish, because there was no clear cut way to know for sure if the symbols people wanted actually meant what they wanted it to mean. There was no Google Translate to help, so many times the symbols were off.

Suns in the early 90s were next. Fish let the crowd know that she did “suns on somebody’s butt crack every single day for a decade.” To spice up the suns, she added her Celtic designs to them so they wouldn’t be so basic and boring.

Stars were next, and the NorCal star became especially popular. Again, she tried adding a Celtic edge to star designs and built up a portfolio full of intricate and beautiful Celtic art.

Nowadays, the most current trend is text, which Fish blames on Angelina Jolie. From John Mayer lyrics to Bible verses, she has seen it all. Although it isn’t exactly a trend, Fish enjoys working on pieces that belong to breast cancer survivors. She has given the famous breast cancer ribbon many times — including one that incorporated her favorite Celtic knotwork — but has also gone a step further and even tattoos on mastectomy scars. She admires these women and told the audience that she promises to give them “art instead of scars.”

Fish has been in the tattoo business for over thirty years and shows no signs of stopping. Bold and outspoken, her arms are covered in tattoos. She continues to learn and practice her craft, while giving people an experience they won’t forget at her shop in Santa Barbara. Like Fish, the shop is transparent and open, with work tables out for all to see. Pat Fish has nothing to hide, but so much to give.