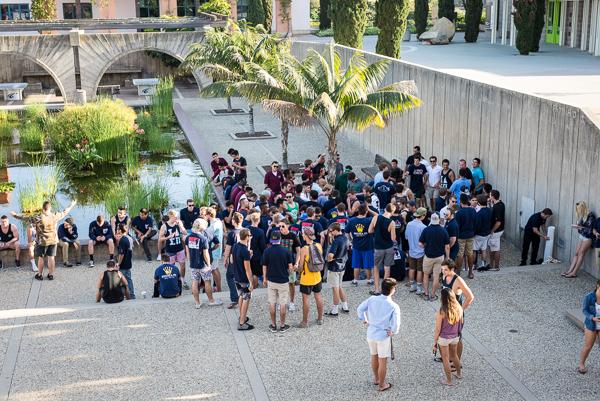 The Sigma Pi and Kappa Sigma fraternities hosted Walk a Mile in Her Shoes Friday night, leading a march from Storke Tower to Embarcadero Hall as part of a movement to end rape, sexual assault and gender violence.

Approximately 150 students participated in the two-hour long event, walking in heels or other feminine clothing to promote safety and respect for women. Walk a Mile in Her Shoes began in 2001 in Northern California and has since grown into a worldwide movement, with tens of thousands of men donning heels to demonstrate the importance of the cause.

“I loved this event. My high school took part in walks every semester and seeing it take place in college is an absolutely amazing sight,” Duong said. “We, as fraternity men, want to work with the community to benefit everybody and having the thought of ‘Oh, X fraternity is prone to sexual violence against women’ leads to adversity in our mission.”

According to Sigma Pi Herald and third-year biology and economics double major Austen Mauch, the UCSB Greek community stands against sexual violence and is actively trying to reverse the negative stigma surrounding fraternities and rape culture.

“Sadly, I do know that statistically 1 in 6 women are a victim of sexual assault, every two minutes someone in America is raped and 1 in 4 college-age women will be sexually assaulted during their time in school,” Mauch said. “Sexual assault is more than just a ‘Greek’ issue. It is a human issue. Even one case of sexual assault is one too many … We wanted to bring this issue to the forefront of everyone’s mind so together, everywhere, we can change the violent culture we unfortunately see today.”

Mauch said UCSB is not the only university where sexual violence occurs and that altering people’s perspectives can be a first step toward changing the campus environment.

“Many people do not understand the struggle that others have to endure,” Mauch said.  “By taking the opportunity to walk in someone else’s shoes maybe we can begin to understand what others are subjected to … Until everyone, every brother and sister, son and daughter, mother and father, friend and neighbor, can walk alone with no fear of sexual violence we haven’t done enough. Until everyone can go anywhere at any time without fear of sexual violence we have not done enough.”

If even only one person we saw walking down Pardall changed how they saw fraternities here at UCSB, we did a fantastic job and should continue to push our solidarity for the safety and comfort of women in similar ways. – Third-year biology major Kevin Duong

Duong said the event was successful if even one person changed his or her opinion on fraternities.

“One thing to note is that sometimes events like these don’t feel like it was ‘successful’ but in my eyes, even if one person was swayed to change their opinion then it was successful,” Duong said. “If even only one person we saw walking down Pardall changed how they saw fraternities here at UCSB, we did a fantastic job and should continue to push our solidarity for the safety and comfort of women in similar ways.”

Mauch said while it was difficult walking in high heels, this was his favorite part of the event because it allowed him to better relate to those who choose to wear them.

“It was definitely an eye-opening experience,” Mauch said. “It was incredibly difficult and tiring and made me truly appreciate what women and men go through when choosing to wear heels. I believe the event went very well, and through our constant chanting on the walk of ‘listen, believe, support’ definitely drew most people’s attention and hopefully inspired some inquiry into sexual violence awareness and prevention.”

According to Duong, the students participating in the walk received positive support from bystanders as they marched through I.V. toward Embarcadero Hall.

“My favorite part was actually when we started entering I.V. past the Pardall Tunnel and our entire group started chanting, ‘listen, believe, support’ while doing our walk,” Duong said. “It showed that we not only were men who could change our footwear for a mile, but that we were willing to, as a collective, voice our concerns for the women in I.V.”

Mauch said by attending the event, participants made a promise not to be passive bystanders when it comes to preventing sexual violence.

“They were pledging to stop sexual violence, and that any and every time they see anything questionable anywhere, they will not stand idle,” Mauch said. “We need the culture to change. We need everyone to speak out, stand up and not let the violence continue.”

“Preparing the event required filling out forms, reserving the plaza, making posters and signs, and spreading the word to invite as many individuals as possible to the event,” Llamas said. “Leading up to the event there were several educational workshops geared towards improving sexual violence awareness.”

Mauch said his fraternity chose to host Walk a Mile in Her Shoes to fulfill the community service requirement which all Sigma Pi chapters must complete because he thought it could make a significant impact.