The Daily Nexus
News
Take Back the Night Event Advocates For Women’s Safety
April 17, 2015 at 8:31 pm by Alyssa Schmidt 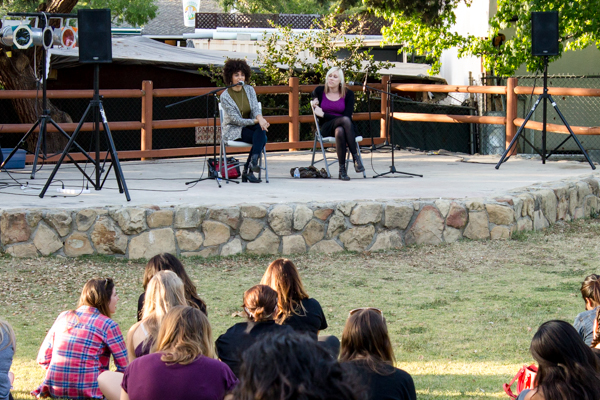 The Associated Students organization Take Back the Night hosted their annual rally and march on Thursday night at Anisq’Oyo’ Park to address sexual assault in Isla Vista and to protest the climate of fear and violence women face near campus areas.

Editors from Feministing.com Lori Adelman and Jos Truitt spoke at the event about what constitutes feminism.  Adelman said feminism might cause strife between genders as power dynamics change.

“When we’re talking about feminist goals, we’re not necessarily talking about a zero-sum game,” Adelman said. “There are some things that we are asking, telling and demanding that men and people who have been operating under the privilege of patriarchy give up. And it’s not something they can do without maybe some direct personal loss.”

According to Adelman, feminism is not a friendly request, but a demand for what is owed to an individual.

“This isn’t us asking for you to do us a favor and be nice and from the bottom of your heart or to be kind and give us these small feminist wins,” Adelman said. “We’re asking and demanding power. It’s not always going to be an amicable relationship.”

At sunset, attendees marched through I.V. with signs labeled “Slut shame is victim blame” and “My body is mine.” After the march, attendees regrouped at Anisq’Oyo’ Park for a “survivor circle” to share personal thoughts and stories about sexual violence.

Take Back the Night Co-chair and third-year feminist studies and English double major and Kelty Kauffman said females are constantly on edge when they are out in the streets after dark.

“It’s scary going out at night,” Kauffman said. “When you’re someone who’s not a straight white dude, going out at night means doing a checklist in your mind of things that could go wrong, figuring out how to keep yourself safe.”

According to Kauffman, this year’s event saw a new, wider range of emotions compared to last year’s.

“This year’s event had a lot of heart,” Kauffman said. “There were a lot of tears and there was a lot of healing, but there was also a lot of laughter, which is not something that I’ve experienced in these spaces before, and that felt really, really good. We were okay to laugh. It was allowed. People were allowed to express themselves however they needed to.”

Kauffman said the organization aims to empower women in order to gain the same privileges as men.

“The phrase ‘take back the night’ means taking back our autonomy, our ability to leave the house, our ability to do things like a regular person would, and by regular I mean straight white dudes,” she said.

Second-year Chican@ studies and history of public policy double major Alejandra Melgoza said after she was sexually assaulted last year, survivor resources at UCSB advised her against taking the case to court against her wishes. According to Melgoza, Judicial Affairs claimed the case would not make it to court, and if it did, she would not win.

“Unfortunately I only got to enjoy my college experience one quarter here at UCSB,” Melgoza said. “Survivors all have different ways of healing and coping … There’s not a single label or stereotype but unfortunately, Judicial Affairs wanted me to fit a mold. I had to persist and literally argue with them through phone calls, emails and appointments. I had to make sure they were doing their job.”

“We still live in a rape culture,” Trifunovic said. “There’s a lot of conversations that I think especially people our age need to be having about the society we want to build as we go out into it. I think it’s a good space and really educated people with a lot of resources and ideas about how to fix that.”

Third-year anthropology and psychology double major Alexandra Ballinger said there is more to sexual violence than the victim and the perpetrator, and “sexism encourages rape culture.”

“There’s so much that plays into sexual assault. I think people tend to look at it as a person to person thing, like it’s an individual perpetrator’s problem,” Ballinger said. “But really, it’s a result of people giving their tacit approval.”

According to Ballinger, events such as Take Back the Night remind community members and survivors that they are not alone.

“I think it’s really important that survivors know that other people care,” Ballinger said, “and that there’s awareness about it. Being here is educational. It helps me learn more about what’s really going on and things under the surface.”

“I think everybody knows someone who is a survivor,” Ballinger said. “You could be sitting in lecture and the person next to you could be a survivor and you wouldn’t know. People just don’t know that they know survivors.”

Fourth-year feminist studies and global studies double major Presly Mellor said “taking back the night” means women should not have to live in fear.

“I see it very literally where we take back the night,” Mellor said, “where we, as women, can walk freely without feeling threatened, without feeling the need to look over our shoulder multiple times on a walk back home at night, I don’t have to worry about being too drunk or having to walk down a dark street.”

According to Mellor, she hopes the organization will continue its fight to end sexual violence and assault.

“For me, it’s really empowering to see what younger students are organizing and leading because I’m on my way out, but I still want this work to be done,” Mellor said. “It’s really nice to hear that first-, second- and third-years are going to be dedicated to this cause the rest of their time at UCSB.”

Mellor said though participation rates have not changed since she attended in 2013, the diversity of participants has greatly increased.

“There’s been a change in the people coming which I think is good, because it shows that more people are interested and different kinds of people, all different majors, different years,” Mellor said.

I think you’re confused about what a Zero sum game is exactly.

See if you gain what I give up, that’s zero sum. Because the sum of the differences at the end of the game is 0.

So when you say “There are some things that we are asking, telling and demanding that men and people who have been operating under the privilege of patriarchy give up”

What you are describing is in fact a zero sum game.

“Kauffman said the organization aims to empower women in order to gain the same privileges as men.”

Privilege (noun) is a special right, advantage, or immunity granted or available only to a particular person or group.