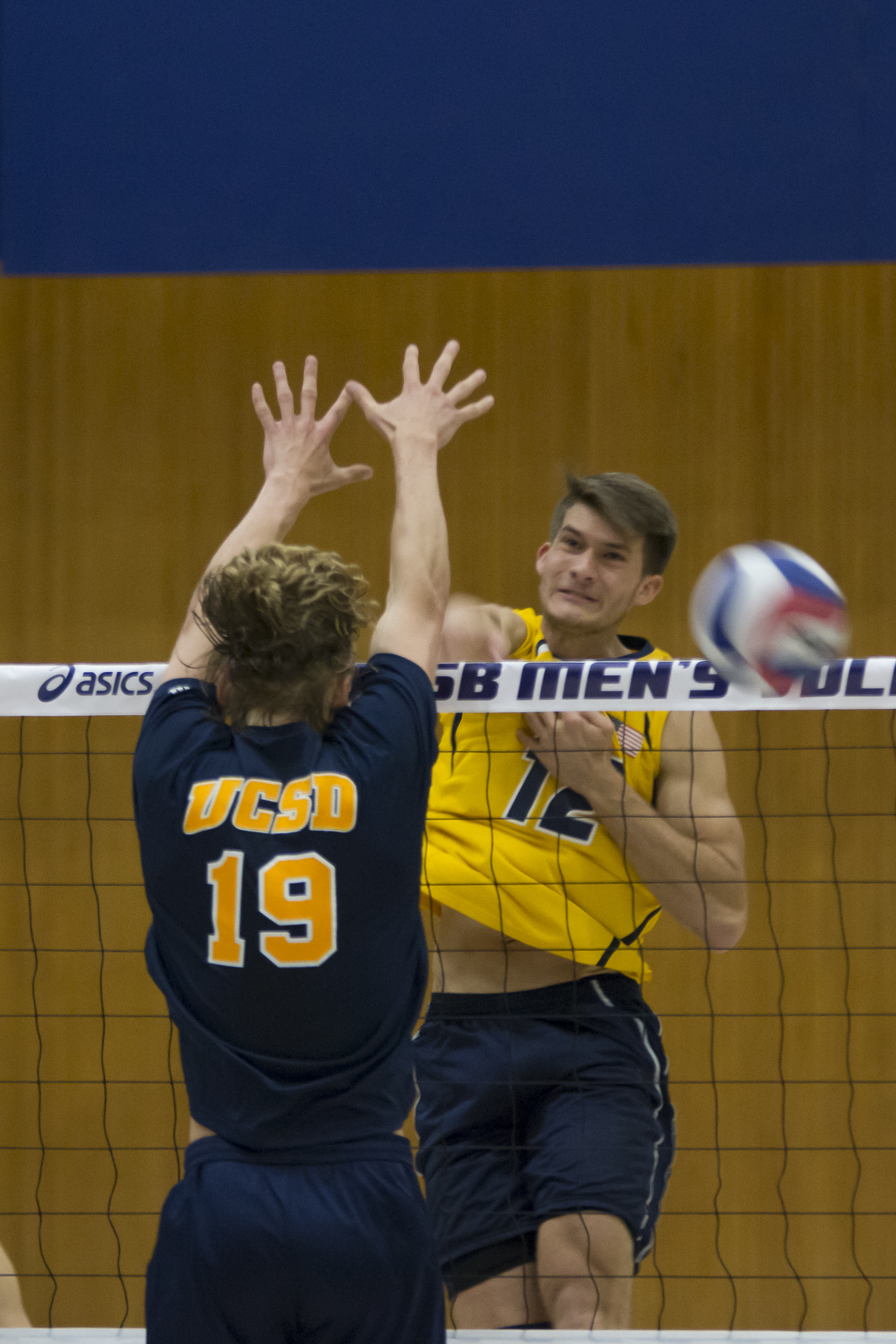 “We played a hell of a match,” senior outside hitter Kevin Donohue said. “It was a team effort, a great performance by all the starters. We saw this as an opportunity to play in a playoff atmosphere and all of the guys stepped up big time.”

UCSB’s win puts its MPSF record at 12-9, while Pepperdine drops to 17-5. The Gauchos have one match remaining against No. 14 Stanford on Saturday night, and with No. 6 BYU taking on No. 1 Hawaii twice this weekend, last night’s win puts Santa Barbara in good position to be the fifth seed entering the MPSF league tournament next week.

The Gauchos started the match on a tear, taking a 7-2 lead, and they never looked back, winning the first set 25-15. The squad had one of their best hitting sets of the season with a .571 hitting percentage on 13 kills to only one error. Sophomore outside hitter Jacob Delson led the team with five kills in the set, on his way to 12 kills in the match overall.

It was evident that the Waves wanted retribution in the second set. The set started out point-for-point until, at 11-10, Pepperdine won five straight points with senior outside hitter Parker Kalmbach back at the service line. After winning nine of the next 10 points, the Waves eventually took the set 25-15.

Tied 1-1 with equal scores in sets one and two, this match was anyone’s game going into the third set. With the set tied 19-19, the teams went back and forth with consistent sideouts and the game was tied at 24-24. UCSB got the sideout to go up 25-24, and then Delson got the set-winning kill to send the match into the fourth set with the Gauchos up 2-1.

Pepperdine was not about to give in to the Gauchos, and the Waves showed fight down the entire set and then tied it up at 20-20 after three consecutive errors by the Gauchos. After sideouts from both teams, Gaucho junior setter Jonah Seif stepped back to the service line and he took care of business. Seif ripped two straight aces to give the Gauchos the victory in one of Santa Barbara’s best matches of the season.

“Jonah’s a big-time player,” Donohue said. “It takes a great player to step back to the service line in crunch time during the match and serve with the power and accuracy he did. It was an exciting way to end the match.”

UCSB travels north on Saturday to take on Stanford in Maples Pavilion, which has been a very difficult gym for the Gauchos to win in during recent years. The Cardinal will be battling for a playoff spot, needing wins against No. 12 UCLA on Friday night and Santa Barbara the following night to take the eighth seed.

The match between the Gauchos and the Cardinal begins at 7 p.m. on Saturday in Palo Alto.