The Daily Nexus
News
Candidates Engage Students in Q&A
April 16, 2015 at 5:00 am by Peeka Zimmerman and Beth Lebens 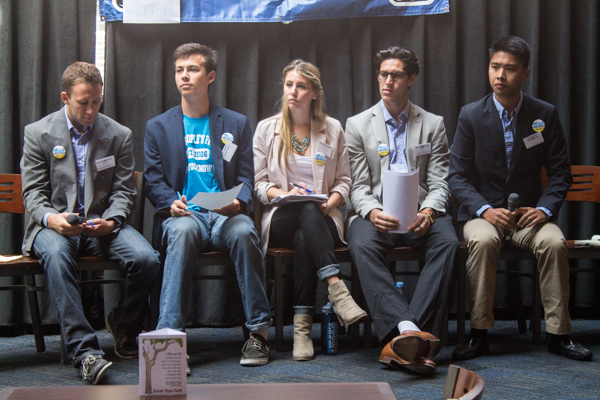 Candidates for the A.S. off-campus senator positions were split by last name into the A-K group (pictured above) and the L-Z group in the Hub to answer questions. Paris Cullen/Daily Nexus

Candidates for the position of Associate Students (A.S.) off-campus senator answered questions from audience members in a series of two open forums Wednesday afternoon at the Hub.

Audience questions focused on lock-in fee transparency, sexual violence prevention, Greek life, housing and parking in Isla Vista, the proposed A.S. Senate resolution to divest from companies committing human rights violations in Israel/Palestine and I.V. self-governance. Nine of the 13 candidates running attended the forums, all of which were associated with Open People’s Party (OPP). The 13 candidates are competing for 12 available seats, each of which represent roughly 1,000 undergraduates who reside off-campus. Each candidate had one minute to answer each question during the 50-minute forum.

In regard to student fee allocations, first-year undeclared student Natalie Jordan said she would like to implement a quarterly review to help students understand how A.S. uses fee revenues.

“I’ve been talking to students almost all week,” Jordan said. “Something a lot of you don’t know is that you pay almost $200 every quarter into student fees that go into Associated Students to pay for things like take-out at Ortega, the bike paths and things like that.”

“I would like to work with the Student Fees Advisory Committee to make sure that our fees are a lot more transparent,” Hechler said. “About 34 percent of our student fees go to 400 NCAA athletes, and I feel like we can reallocate those fees to services that are more available to the general population.”

First-year history major Sasha Bates said he is concerned students do not understand how their fees are allocated nor how A.S. functions.

“I’d like to have more talks between the students and the government, so you actually know where you money is going,” Bates said. “When I’m walking around in Isla Vista and talking to people they don’t actually know what the Senate does.”

“My goals for next year is to increase involvement and awareness on our campus so students like you and I can get involved in the fight against the defunding of our education on the state level and to fight against tuition hikes,” Natarajan said.

Regarding the A.S. Senate resolution to divest from companies committing human rights violations in Israel/Palestine, Hechler said the movement is an issue “out of the students’ hands” and “on the global level.”

“It really doesn’t bring our campus together,” Hechler said. “Although it is a large issue, it is important to realize that a lot of the consequences from divesting or investing are not things that the university cannot really take a stand against.”

Bates said A.S. should not have to decide how the University of California invests its funds.

Jordan said she would be willing to express a position on the matter after further understanding the divestment issue.

“I would be happy to listen to both sides,” Jordan said. “With further knowledge, in the future I would be able to make an educated decision on what we should do if this were to come up again.”

According to Natarajan however, she supports the campus movement for UC to divest from companies committing human rights violations in the West Bank and Gaza region.

“I support this resolution and I would hope to see that the divestment discussion on the UCSB campus be much more inclusive than divisive,” Natarajan said.

Second-year history of public policy and political science double major Jerel Constantino said the issue of divestment is beyond A.S.’s agenda, because a previous bill calling for an end to human rights abuses has already addressed the issue at hand.

“There is a dialogue that our population has to have, but I don’t think a bill for or against divestment is the way to make that dialogue,” Constantino said. “We’ve already had a bill to stop funding for human rights abuses, which answered the question, so I don’t know why it keeps on coming up.”

In regard to sexual assault, Bates said A.S.’s first step should be to educate students about sexual violence on campus.

Hechler, who sits on the Inter-Fraternity Council (IFC) as Vice President of Communications, said he would bring in IFC to assist in his efforts to prevent sexual violence in I.V.

Second-year Chican@ studies and history of public policy double major Alejandra Melgoza said she is a survivor of a sexual assault and would work to create change in the university process for handling sexual assault cases.

“I am a survivor of sexual assault on this campus,” Melgoza said. “I have been working effortlessly to make changes and awareness over and over and over again not only with students, because I am a part of Take Back the Night, but also as well regarding my own case. It is not easy exposing myself to everyone, and I am making sure that policy changes are made.”

Jordan said she would support OPP External Vice President for Local Affairs (EVPLA) candidate Paola Dela Cruz’s idea of creating a “safe space” at the Pardall Center to improve the Community Service Officer (CSO) program on campus and in I.V.

“Something I feel extremely passionate about is the Pardall Safe Space for women at night,” Jordan said. “Also, I’d really like to expand the CSO program.”

Third-year communications major Erin Barnett also said he was in support of Dela Cruz’ ideas for space spaces for students in I.V.

“I would like to work with her to make sure that, if you’re uncomfortable or if you’re drunk and you don’t have a place to go home at night, you can go there,” Barnett said.

“One of the most important things we can do to stop sexual violence in Isla Vista is reach out to the police,” Bates said. “I’d like to improve police relations and continue the forums we’ve been having with the pizza with police officers, and maybe even improve it to something on campus with more people.”

“I look forward to continuing that and making sure that when the police are out there, we as students do not feel threatened and they understand that we as students have a right to defend ourselves and that if they are going to police us it is for a very legitimate reason,” Ninh said.

Regarding Greek life, Jordan said the university should continue to not tolerate any misconduct from affiliated chapters within Greek life.

“I personally think that hazing and things like that shouldn’t be tolerated on this campus,” Jordan said. “I think that UCSB has already take a pretty large stance on that, and this tradition should be continued.”

The candidates also discussed I.V. housing issues and whether or not A.S. should purchase property in I.V.

“Property in Isla Vista is very expensive — probably some of the most expensive you can find in California — and that would not be a good way to spend our money,” Hechler said. “I think the way to go about this issue is to support AB 3 all the way to the county legislature.”

Bates also said the purchase of I.V. property would be an inefficient use of A.S. funds and also supported I.V. self-governance bill AB 3.

“The most important thing for almost all of the issues with housing in Isla Vista is self-governance,” Bates said. “The best way to get a hold of Isla Vista and actually make meaningful change in Isla Vista is by making Isla Vista into something more than just unincorporated.”

According to Barnet, A.S. should support efforts to establish I.V. as a CSD.

“We absolutely need to support the AB 3 bill,” Barnett said. “People in Isla Vista need to be in control of where they live.”

“We’ve done a lot with property in Isla Vista, and I think the Pardall Center is a good example of that,” Barnett said. “I think it would be a good idea to be able to house students.”

“The acquisition of property in Isla Vista is actually extremely important for Associated Students,” Jordan said. “This would stop rent fluctuation by buying the property up, which would help low-income students.”

Constantino said he supported A.S. buying property in I.V., as long as they consider how it might affect residents.

“I feel like the university should take a bigger role in Isla Vista,” Constantino said. “My part as an off-campus senator will be to make sure to pressure the university in that the decisions they make and the property they buy or lease is made consciously.”

“There are a lot of housing issues, such as sometimes students don’t know how to sign a lease or are not informed,” Melgoza said. “I really want to make sure to set up workshops on that regarding housing.”

A version of this article appeared on the page 3 of Thursday, April 16, 2015’s print edition of the Daily Nexus.

“Something a lot of you don’t know is that you pay almost $200 every quarter into student fees that go into Associated Students to pay for things like take-out at Ortega, the bike paths and things like that.”

Not a correction that you all should make since it’s a quote, but this statement by Jordan is false. AS Fees do not pay for take-out at Ortega. That is through fees that students pay to Housing & Residential Services in order to have an on-campus meal plan.