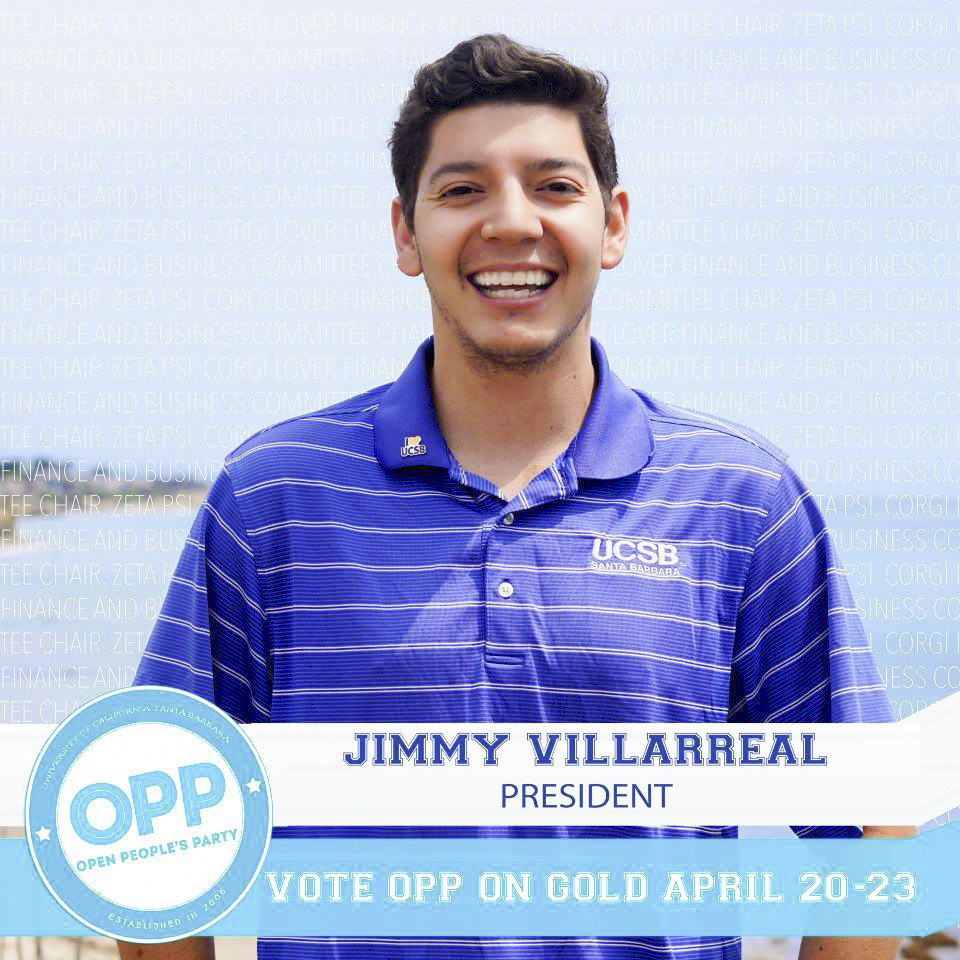 The Daily Nexus endorses third-year history of public policy major Jimmy Villarreal for the position of President of Associated Students.

Villarreal’s shortcomings, however, include an inadequate plan to address campus sexual assault, with lack of clear ideas beyond encouraging use of CSOs in I.V. through the Pardall Center. While encouraging the use of CSO’s is certainly a good idea, Villarreal needs to go further with a more concrete plan to address sexual assault in I.V. and on campus given the prevalence of the issue for much of the campus community.

Villarreal’s opponent, while he offers a fresh perspective focused on the individual rights and free speech of students and is not fit for the position of president primarily because his ideas are unrealistic. His opponent’s primary shortcoming is his lack of relationships with both Associated Students and its related organizations and his complete disregard for existing university structures in place to adjudicate crime, specifically his desire to see university policy directly reflect existing state, county and federal law, is unrealistic. Additionally, while Garshfield’s support for full cityhood for I.V. is understandable, it is ultimately unrealistic at this point because it is financially infeasible. 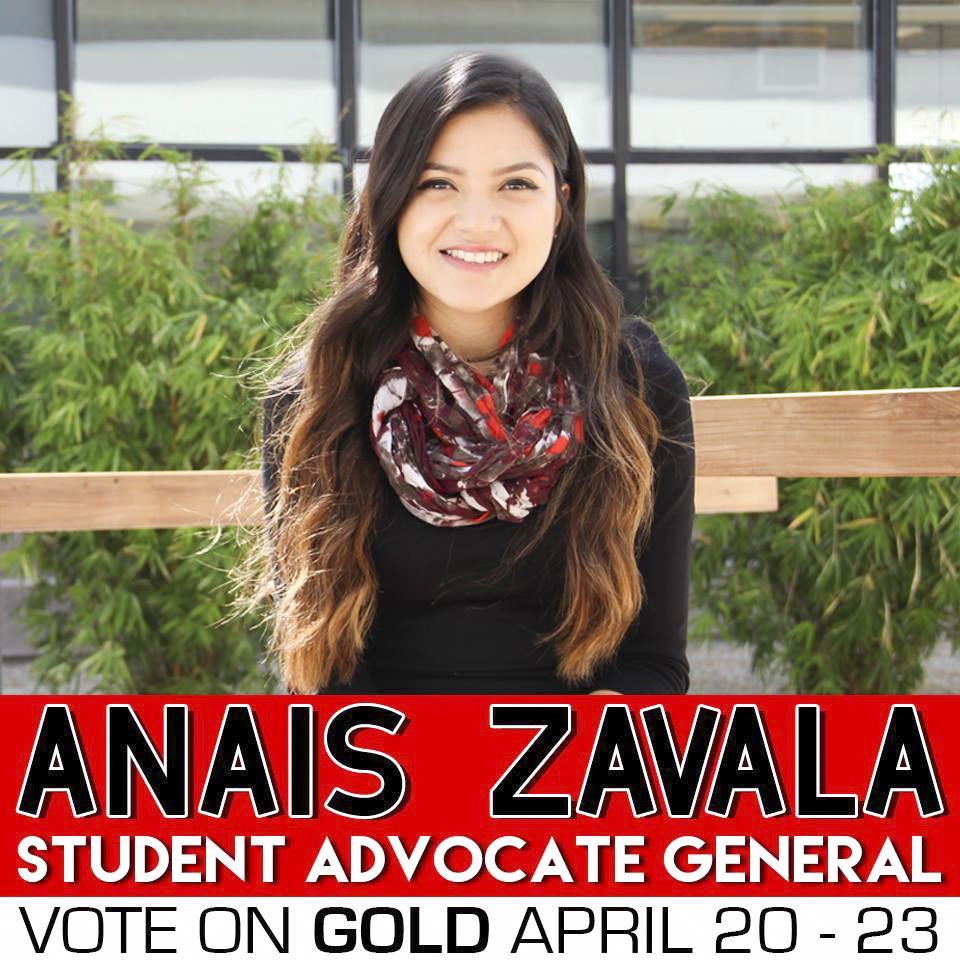 Both candidates stress making the Student Advocate General a liaison between students and University Judicial Affairs, describing the SAG Office as an unbiased safe space for students to disclose information in a confidential environment.

Garcia’s platform has an admirable focus on advocacy regarding issues such as Pell Grant cuts, sexual assault prevention and transfer student resource accessibility, drawing from her experience in United States Student Association and campus groups such as the Student Commission on Racial Equality and Take Back the Night. However, Zavala’s campaign focuses more on directly serving students through casework and communication with Judicial Affairs to sufficiently address student needs.

Although Garcia has useful experiences as a first-generation working student and campus advocate, Zavala presents more specific plans, such as ensuring student privacy in SAG offices with sound proofing and creating a Gaucho Safety mobile application. 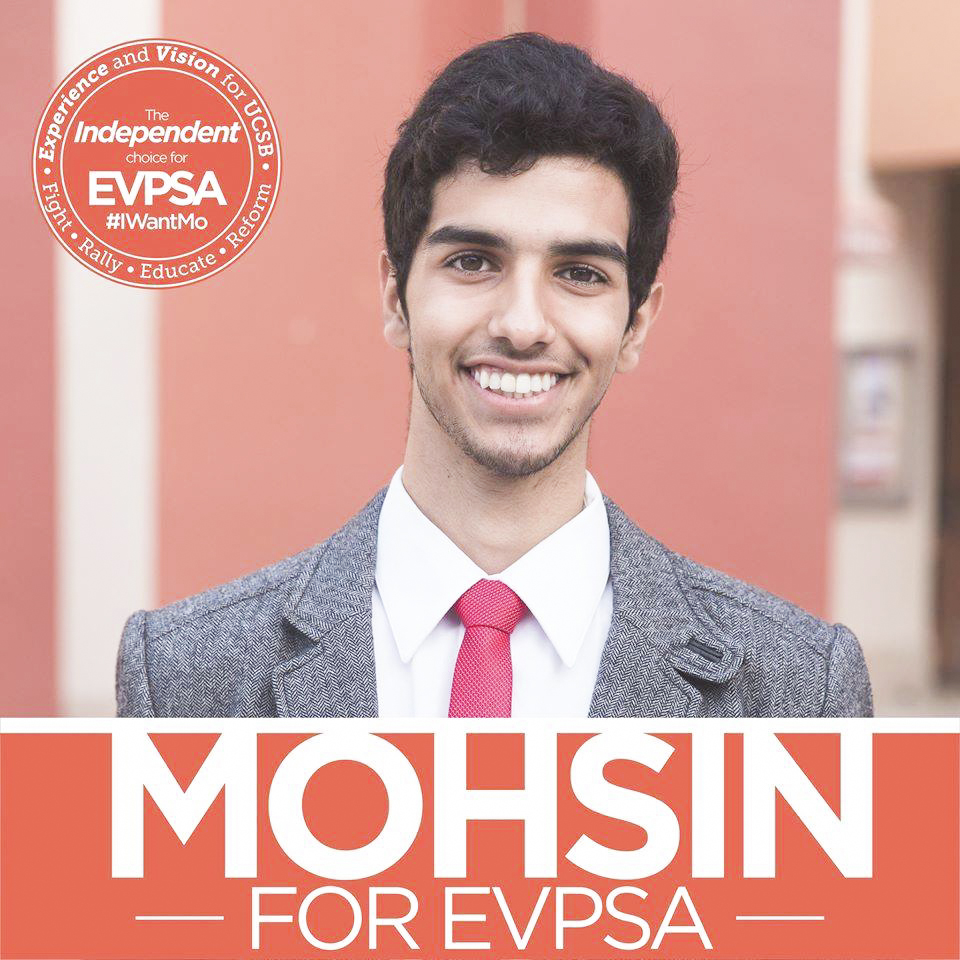 The EVPSA is responsible for educating students on state-level issues affecting them and lobbying the UC Board of Regents and California legislators on behalf of the student body. Although Mirza and his opponent, OPP candidate Carlos Lopez, both have strong backgrounds dealing with the state and UC administration, The Nexus believes Mirza’s ideas show better understanding of UCSB students’ relationship to these governing bodies.

While Lopez’s “Everyone knows a student” online letter campaign idea and plan to bring a regent to campus are original, Mirza’s plan to mobilize students from across UC campuses in order to directly negotiate tuition freezes with Governor Brown shows he is ready to capitalize on the influence college students can have in order to affect real legislative change. Backed by experience lobbying in Sacramento and working with other UC students through the UC Student Association, Mirza shows a stronger command of the role of the university in the statewide political conversation as it affects tuition, sexual assault and other student issues.

Although Lopez’s plans to engage students through informative events such as a “Democracy Day” festival and other EVPSA events, the Nexus believes Mirza’s plan to focus on smart state-level strategies to tackle important issues better addresses UCSB’s needs. Both candidates have strong leadership backgrounds and well thought out plans to educate UCSB students on statewide issues, but Mirza’s ideas for strategically mobilizing UC students and clear knowledge of the UC administration and state government make him the best choice for EVPSA. 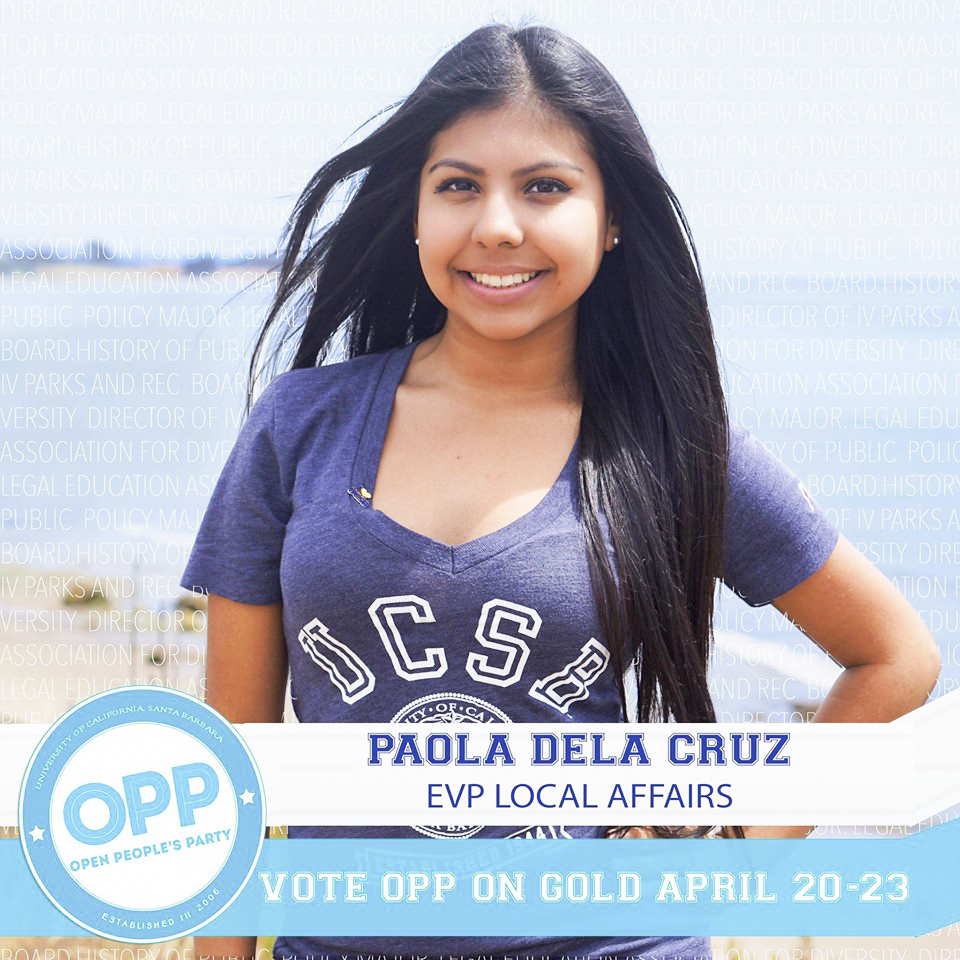 The Nexus endorses Paola Dela Cruz for the position of External Vice President of Local Affairs.

Dela Cruz demonstrated a clear plan for using the EVPLA office in I.V. to effectively advocate for students that focused on three key areas with specific goals for each. Her plans to launch a year-long awareness campaign to combat sexual assault and create an alternative transportation system with community service officers (CSO) stationed at designated location in I.V. to transport students safely home in bicycle cabs, are both original and much needed measures. Dela Cruz’s specific desire to include low-income Latino families in EVPLA related events and self-governance efforts are also commendable and essential to having a holistic relationship with I.V.’s diverse communities.

Dela Cruz’s impressive roster of experience and service as an off-campus senator, a fellow in the EVPLA office and a board member on the I.V. Community Development Cooperation gives her a strong local advantage over her competitor, whose considerable county level experience, while impressive, is not necessarily as relevant to I.V.’s current needs as Dela Cruz’s extensive experience with I.V.

Though second-year history of public policy major Dela Cruz is younger than the majority of candidates running for executive positions in this year’s election, her detailed strategies and genuine passion for addressing the issues facing all demographics of the I.V. community are a strikingly capable combination for a future EVPLA. 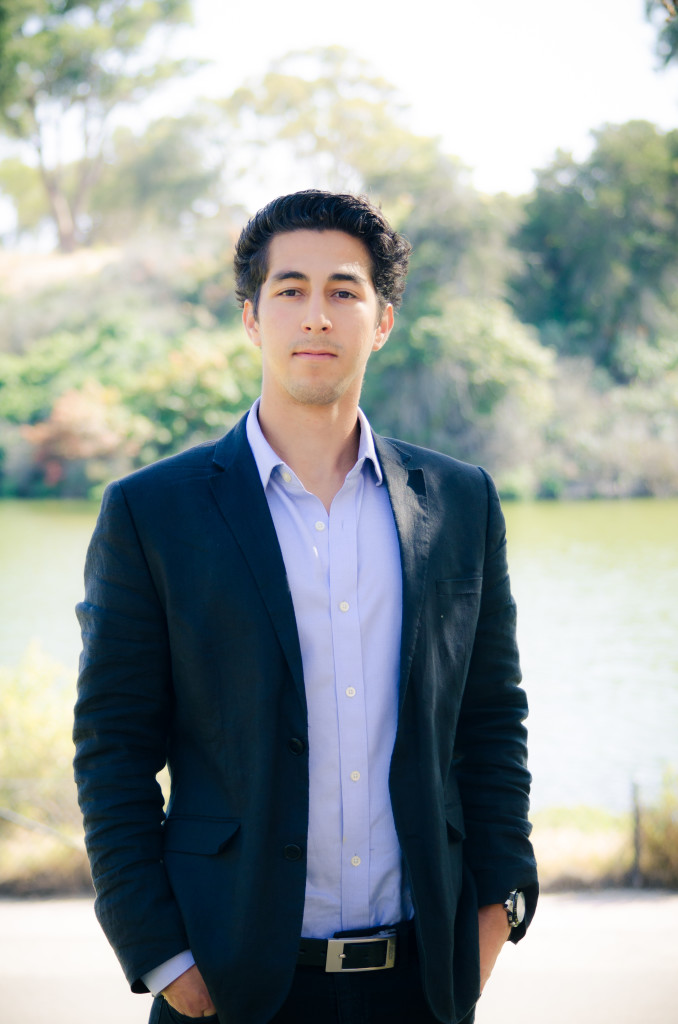 The Nexus endorses Zach Goulhiane for the position of Internal Vice President. Goulhiane is running independently against Open People’s Party candidate Kimia Hashemian. Goulhiane’s experience as the former chief of staff to the IVP indicates he is familiar with the roles and responsibilities of the office. Goulhiane currently sits on the A.S. senate as Letters and Science Collegiate Senator. His opponent did not participate in AS this year, which may provide a fresh point of view but could potentially harm her ability to lead as IVP.

A notable point in Goulhiane’s platform is his plan to develop a center in I.V. for overly intoxicated UCSB students. While A.S. members have previously suggested a similar facility, Goulhiane plans secure funding for the project by reaching out to sources outside the university. While the Nexus approves of Goulhiane’s desire to implement a sobering center in IV,  its exclusivity to UCSB students remains a strong concern. Goulhiane’s strongest point is his concrete plan to further engage with senators on a personal level to ensure the senate functions effectively. This point was absent from Hashemian’s platform.

On the use of secret ballot in Senate, Goulhiane took a similar stance to his opponent. While both candidates acknowledge the importance of considering the safety of student representatives when voting on heated issues, Goulhiane was adamant elected officials should make their decisions on important issues public to truly represent constituents.

Both candidates spoke of increasing transparency of fee allocation, but Goulhiane indicated a better understanding of the A.S. budget. The Nexus believes this perspective, in addition to his more substantial platform and more extensive experience with A.S., makes Goulhiane a better candidate for the office of IVP.

The Nexus does not endorse the newly proposed fee of $5.05 to maintain the Associated Students’ presence in Isla Vista. Although the Nexus supports A.S.’s greater effort to improve and integrate Isla Vista, this fee lacks clarity of purpose.

A.S. states it would use this fee to continue leasing the Pardall Center, but the further purposes are vague. A.S. describes the fee as a method to support student and professional staffing in Isla Vista but fails to elaborate on the type of staffing and services it wishes to expand. The Nexus believes that the lack of transparency regarding the potential uses of this fee beyond funding the Pardall Center makes it an unfair charge to students.

A.S. also states any remaining funds from this fee might be used to purchase or lease properties in Isla Vista. This would be subject to student approval of a separate referendum in accordance with a senate resolution. Given acquisition of Isla Vista property by A.S. is a divisive issue, the Nexus believes its potential funding should be determined more directly.

The Nexus endorses the A.S. Bike Committee fee increase to allow funding for currently unaffordable projects and future proposals. The increase would raise the current $1.57 fee by $1.99 for fall, winter and spring quarter and

The increased funds would enable the committee to install new bike racks, pave bike paths, improve safety at intersections, and educate students on the importance of bike safety. Educating the bike-safety-ignorant freshman, who gawk bewilderedly at daunting bike circles, and providing additional parking to prevent bikes from being locked to random fence posts and stop signs are improvements worthy of student funding.

With paths often jammed with bikes wheel-to-wheel in busy passing times, the majority of students are aware of the need for increased bike safety. Rather than question whether each ride will be your last before embarking on the perilous journey that is the campus bike paths, vote YES for the A.S. Bike Committee fee increase.

[Correction: This article incorrectly referred to Garcia’s advocacy on Pell Grants as Zavala’s and, Zavala’s relationships with Judicial Affairs as Garcia’s. This article has been updated accordingly.]

[Update: A portion of this article regarding the Internal Vice President endorsement has been retracted. For more information please see the retraction.]

A version of this article appeared on the pages 6-7 of Thursday, April 16, 2015’s print edition of the Daily Nexus.

Kristian with a K

Nexus. You know I love y’all but proofread Anais’ endorsement again. Y’all mixed up the names in 2 places: “JOSELINE’s (Not Zavala’s) platform has an admirable focus on advocacy regarding issues such as Pell Grant cuts, sexual assault prevention and transfer student resource accessibility, drawing from her experience in United States Student Association and campus groups such as the Student Commission on Racial Equality and Take Back the Night. “ZAVALA (Not Garcia) has built relationships with Judicial Affairs and the Financial Aid Office and has encountered several different types of student casework, allowing her to enter office with clear goals… Read more »

Kimia is not running unopposed. Her opponent is the independent candidate Zach Goulhiane running independently.

garshfield is a horrible candidate. He is disconnected from reality and lives in his own fantasy world. This is why his ideas come of as unrealistic.

Kimia is far better prepared to be IVP. Zach was fired from the IVP Chief of Staff position last year because he was unreliable! Not to mention his lovely coke habit. Did the nexus even ask for references or check sources?

To the individual “WTF,” You need to take a few steps back and realize what you just said. Zach was never fired from his position and unless you know his back story or what he actually was going through during that time period, then I ask that you step back and reflect. This is a student election. If you have a problem with certain candidates, take it up with them in person instead of venting behind a computer screen. Grow up and act like an adult. If you dont feel comfortable with Zach running for IVP, then bring it up… Read more »

“Extremely Enthusiastic about the position”? The Nexus didn’t even know he was running, he didn’t show up to the interview and doesn’t care about AS or the
Senate, i.e. he was on his phone for 90% of the Divestment Senate meeting. But thats just my two-cents.

It’s not that Zach didn’t show up to his interview, it’s that they never offered him one. Hence this entire retraction issue. Why don’t you get YOUR facts straight?

“Villarreal’s opponent, while he offers a fresh perspective focused on the individual rights and free speech of students and is not fit for the position of president primarily because his ideas are unrealistic. His opponent’s primary shortcoming is his lack of relationships with both Associated Students and its related organizations and his complete disregard for existing university structures in place to adjudicate crime, specifically his desire to see university policy directly reflect existing state, county and federal law, is unrealistic. Additionally, while Garshfield’s support for full cityhood for I.V. is understandable, it is ultimately unrealistic at this point because it… Read more »