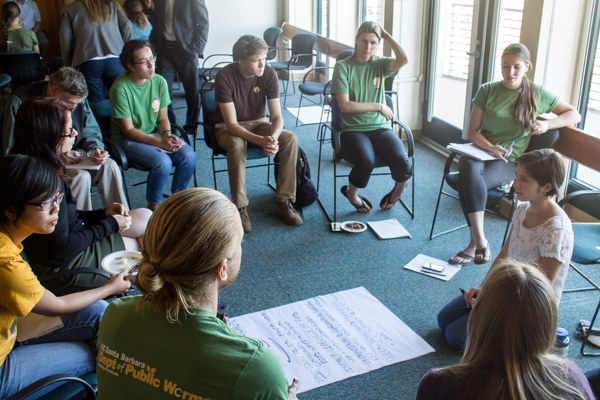 The Associated Students Food Bank and UCSB Sustainability held a Food Justice Forum on Wednesday for students, staff and faculty to discuss food issues on campus.

The forum provided an opportunity for facilitated conversations on how to improve UCSB’s food conditions and integrate feedback for the next Campus Sustainability Plan. During the forum, attendees discussed ways to help students overcome dining obstacles and more easily obtain groceries.

According to Associated Students Food Bank Chair Katie Freeze, one of the main goals of the Food Bank is not just to feed the struggling students, but to focus on providing healthy, nutritious food, and finding solutions to problems such as grocery store accessibility.

“The Food Bank exists as a service because students are struggling to make ends meet. The purpose of this forum is to help students become self-sufficient and be able to feed themselves,” Freeze said. “The Food Bank is a holistic service. We’re trying to make sure students have healthy food and know where it comes from.”

Freeze said many students on campus suffer from hunger and the forum hopes to educate students on how to combat it and allow attendees to share their thoughts in establishing short and long-term goals.

“A lot of people aren’t aware of student hunger; it’s always kept on the down low,” Freeze said. “The Forum empowers students who are personally facing hunger or encourages those who want to make a difference … Our long term goals are improving access to farmers markets and transportation to grocery stores.”

According to sustainability coordinator of UCSB’s Department of Geography Katie Maynard, UCSB Sustainability wants to unite all the different groups and departments on campus to discuss food programs that occur on campus. Maynard said the goal is for all sustainability, environment and food groups to serve as a coalition rather than individual organizations.

Vice Chair of the A.S. Food Bank Committee Erick Lankey said the food bank is just one of many resources for students on campus. Lankey said instead of working to expand the organization, the food bank wants to combine with other departments to provide a wider variety of services to students in need.

“We don’t want to be the highlight, there are other resources that are needed in our space, not just pure distribution of food,” Lankey said. “The idea of a food bank is a good idea, but in an ideal world, we don’t want to exist. We want to have this but also combine with other departments [to focus] for total well-being. We want to become deeper rather than expand bigger.”

They should have a broader range of choices. Students are used to eating crappy food, but what they have chance to grow and prep their food, their diets change. Just asking what people want is not a valid measure of the potential. – Environmental Studies Professor David Cleveland

During the forum, attendees broke off into groups to discuss various short and long-term goals for the campus. Environmental Studies Professor David Cleveland said the UCen should focus more on providing healthy options rather than profit.

“UCen dining is restricting what they can sell [and] got rid of some healthy alternative on campus because they are competing with the dining services,” Cleveland said. “The University isn’t providing them the support first generation college students need. Resources aren’t following student demographics and there is a shortage of support for those students, which relates to their inability to get healthy food.”

“They should have a broader range of choices. Students are used to eating crappy food, but what they have chance to grow and prep their food, their diets change,” Cleveland said. “Just asking what people want is not a valid measure of the potential.”

According to Cleveland, “pressure can change policy,” meaning the only way to incite change is by fighting for it as he did years ago when the University wanted to eliminate the campus gardens in favor of new housing for graduate students.

“In 2000, [the school] wanted to eliminate [the campus] gardens and there was no alternative,” Cleveland said. “They would do all sorts of stuff to manipulate us so that we don’t oppose it, but all of a sudden, at the planning meeting, the Vice Chancellor of Facilities said they would put the graduate housing somewhere else instead.”