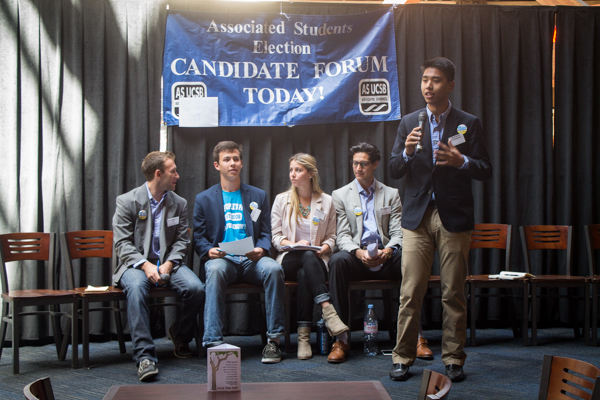 Prompted by questions texted in from the audience, the candidates discussed budget, police relations, sexual assault, mental health, I.V. self-governance and the A.S. senate resolution to divest from companies carrying out human rights violations in Israel-Palestine, which was voted down at Wednesday’s meeting.

Garshfield said he aims to represent unheard voices in the student body and cited voter apathy as evidence of voters feeling alienated from current A.S. leadership.

Garshfield said he believes current A.S. President Ali Guthy did not make a strong enough effort to be accessible to students.

“I think accessibility is a big problem and one of my criticisms of the current administration is a lack of accessibility because I think a lot of students probably don’t know who the A.S. president is,” Garshfield said. “I’d like to have events like pizza with the president … It’s a very easy problem when you’re behind a desk to forget who you’re representing.”

According to Garshfield, the police in Isla Vista should turn their focus away from “victimless crimes” and towards other crimes such as sexual assault and thefts.

On the topic of Assemblymember Das Williams’ state assembly bill (AB 3) to create a Community Services District as a solution to the call for increased self-governance in I.V., Garshfield said legislatures should instead be aiming for cityhood.

“I think that AB 3 doesn’t go far enough. I don’t believe in half measures in relation to cityhood and so I will not settle for a Community Services District, I will make sure that Isla Vista becomes a city,” Garshfield said.

When an audience member asked what Garshfield’s number one most important objective would be as president, Garshfield said he would promote freedom.

On whether or not senators should be allowed to cast secret ballots, Hashemian said the practice is acceptable under certain circumstances, citing death threats made against UC Irvine student government members who supported a bill to remove the United States flag from the student government lobby there.

“Senators need to be held accountable,” Hashemian said. “However if there is a topic where senators are threatened by students, like at UCI with the flag resolution, then I agree with a secret ballot because the safety of the senators is important to me and the most important aspect.”

I want to make sure that when Week of Welcome and tabling events come around we continue to push freshman and incoming students to actually understand what we have to offer and what they can do to change UCSB. – Letters and Science Collegiate Senator Zach Goulhiane

Goulhiane said he shares a similar opinion on that issue, arguing that an individual’s safety outweighs students’ need for transparency.

“It is really important to know how your representatives vote, but when it comes to circumstances in which people feel unsafe about voting because they believe certain people will be against them, I feel that since we are students, the safety of us and everyone else should be kept in mind,” Goulhiane said.

“I personally was a part of the legal code reconstruction committee where we moved and around and switched ideas in sections and articles so that it all position duties would be in one area and not scattered all around. This will allow for future elected officials to know what they have to do and not have to waste a whole quarter trying to figure that out,” Goulhiane said.

But Hashemian also said also has experience making changes to the A.S. legal code, and plans to further educate senators on the code’s policies if elected.

“Last year I was an on-campus senator and we created the legal code that created the new structure of A.S.,” Hashemian said. “For next year, I plan on teaching senators what the A.S. legal code is and seeing what problems there are and what needs to be changed.”

Hashemian said if elected, she would emphasize encouraging students to be involved with A.S. using events such as a craft fair to get students excited about student government.

“Students pay $180 into A.S., but not everyone’s involved or excited to be involved,” Hashemian said. “I want to collaborate with students through my craft fair. I want to bring entrepreneurial students into A.S. This brings a whole new perspective into A.S.”

Goulhiane said he plans to reach out to younger students early in the school year to get more people working with A.S.

“I want to make sure that when Week of Welcome and tabling events come around we continue to push freshman and incoming students to actually understand what we have to offer and what they can do to change UCSB,” Goulhiane said.

Goulhiane said he plans to work to improve I.V.’s reputation, because the public tends to confuse I.V. with UCSB, leading students to take the blame for events that are out of their control.

“Making sure that Isla Vista gets fixed has been a huge priority for me and I’ve had the support of Chancellor Yang, the I.V. Foot Patrol and other entities to try and figure out a way to change Isla Vista’s image, because sadly, outside of UCSB, a lot of people see I.V. with a direct connection to UCSB and automatically assume that UCSB students are responsible for whatever takes place there,” Goulhiane said.

Hashemian said while working to keep Deltopia a safe event during the first weekend of April, she came to understand volunteering as a way to potentially improve I.V.’s reputation.

“Recently we have been building a better image in Isla Vista and I hope that we continue to do so. Recently during Deltopia I was part of a group called UCIV that passed out water to students and others and made sure that everyone stayed safe and out of trouble,” Hashemian said.

“We plan to work as senators to distribute as much money as possible and not waste any money,” Barrera said. “It is important all fees are equally distributed.”

“We want to reach out to students and make sure they are knowledgeable about the fees and where their money is going,” Barrera said.

“Finance and Business Committee currently has a rule that any organization in OSL or basically on campus the past two years gets $250 dollar start up fund that is always guaranteed,” Nemeh said. “I would want to expand that so anyone who wants to start a student group in OSL has the necessary funds to do so.”

“I would want to focus our student fees to services that students use, especially A.S. Program Board concerts, A.S. bike shop,” Wright said.

Wright said she also hopes to establish textbook banks in residence halls to save students’ money.

“For more popular classes, students can share textbooks and use them there,” Wright said. “Students can save on textbooks, which costs such a huge amount of money and can be a giant burden on students.”

First-year political science major and On-Campus Senator candidate Jose Magana said he has an idea for an app that would help students understand the A.S. budget.

“A.S. should be more transparent in their financial ways,” Magana said. “One way I feel this would be innovative and relevant to our campus is creating an app that will let students know what was allocated to what.”

Nemeh says he will work with his constituents by attending residence hall council meeting.

“Increasing accessibility to A.S., I will attend hall councils on a weekly basis,” Nemeh said. “We plan to do that and engage and see what the students want.”

Barrera said her main goal will be expanding Counseling and Psychological Services (CAPS) beyond main campus.

“The one on campus is too far from students,” Barrera said. “I want to allocate funding for expanding those services.”

Wright also said she wants to expand the reach of CAPS.

“I want to add more mental health services to the outlying dormitory halls and resident apartments,” Wright said. “They are left unstaffed and it’s unacceptable. I will work to bring funding back to CAPS.”

Barrera said she will focus on resources for transfer students.

“I also want to start up transfer student center … and start an online forum for transfer students to share textbooks, share class schedules and become more united as a community,” Barrera said.

Nemeh said he would work to implement reports on campus energy efficiency.

“To publish a yearly energy efficiency report to see how UCSB gets its energy … and how we can move towards reducing reliance on nonrenewable energy and moving towards things like solar energy,” Nemeh said.

“We want to find a way for the university to work on insuring international students or recently evicted students do not have to stay on the street or couch surf for a period of time,” Magana said. “The university can find some sort of amenity, maybe in the classrooms overnight for them to continue looking.”

Wright, a survivor of a sexual assault, said she wants to expand counseling services, specifically for other survivors.

“So something important to me is expanding resources for survivors, especially having enough counselors on hand to be able to work with survivors as well as making sure that they are trained specifically how to respond to sexual assault,” Wright said.

Magana said his main goal will be to improve campus mental health services.

“My main goal overall is working on mental health and diversifying it by getting more counselors that actively represent the student body as well as expanding these services to the residence halls,” Magna said.

Regarding divestment, Nemeh said each candidate’s position does not reflect OPP.

“I want to make it very clear that our opinions on these issues are ours and ours alone. The party does not take a stance on geopolitical issues,” Nemeh said.

Nemeh, who said he supports divestment, said he did not approve of senate’s use of secret ballots when voting on the proposed divestment resolution at Wednesday’s meeting.

“I think that is extremely unfair. I don’t think the senate should hide behind secret votes when making decisions that are so important to so many students on our campus.”

Wright said she chooses not to form an opinion because she represents a divided community of students.

Elections for all A.S. positions will be held on GOLD April 20-23.

The photo used here is from the off-campus senator forum on Wednesday, not these Thursday forums.