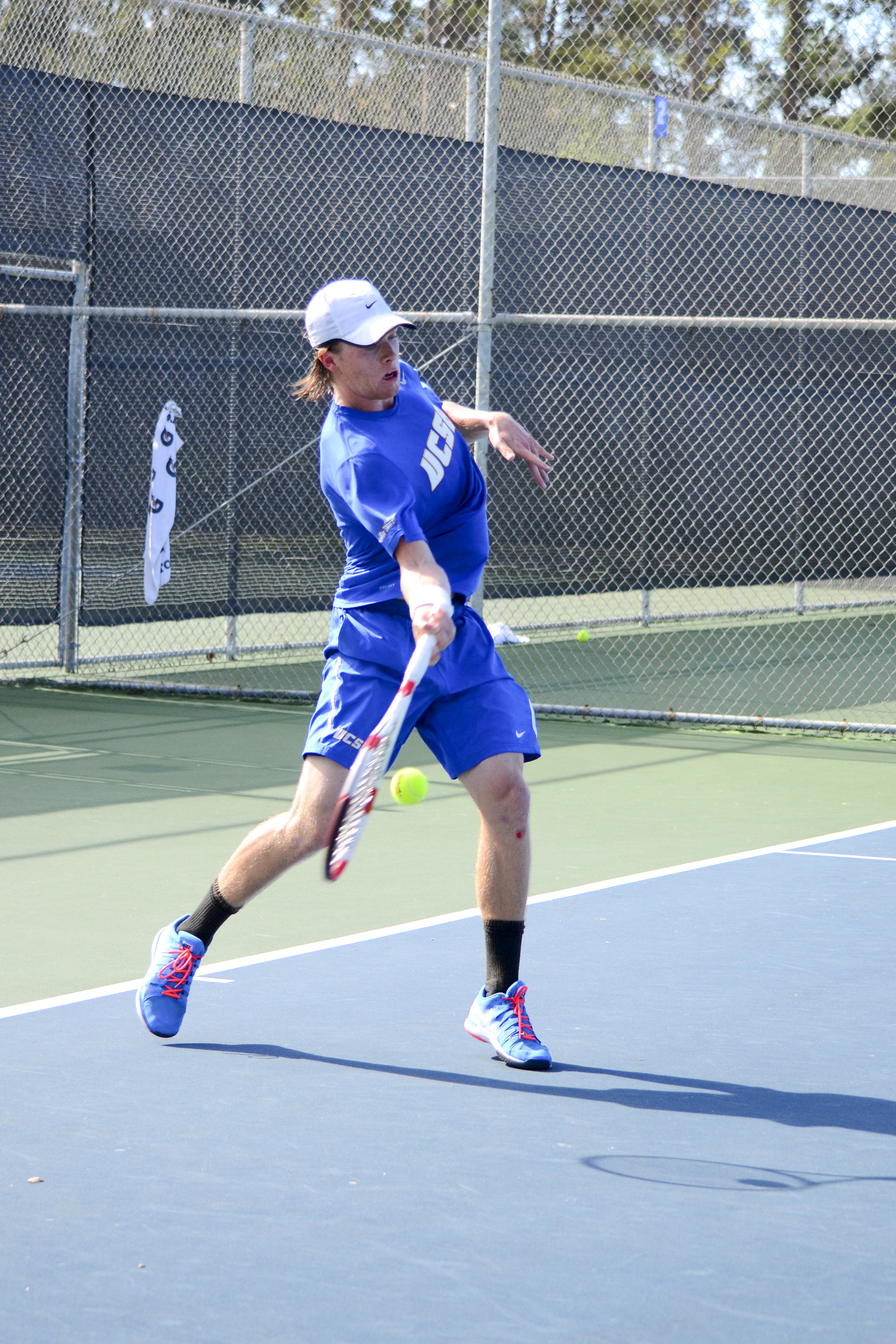 Morgan Mays hits the ball across the net to his opponent. Christina DeMarzo/Daily Nexus

This past weekend the No. 65 UCSB men’s tennis team went 1-2 in three matches on the road in Northern California. The Gauchos took a 4-3 victory over the University of Pacific in-between a pair of 4-3 losses to conference opponent No. 68 UC Davis and Fresno State. In all three matches, the all important doubles point was the deciding factor.

With this weekend in the books, the Gauchos move to an overall record of 11-9 and a conference record of 2-2.

No. 68 UC Davis took on the Gauchos just a day after handing a 5-2 loss to the No. 49 Cal Poly Mustangs. At a 2-0 record in conference and a 7-0 record at home, the Aggies would not take anything less than a win to cap off the season undefeated in Davis.

The Aggies started off the match on a good note by beating the Gauchos in the doubles competition. The Gaucho pair of seniors Tobias Galskov and Ziad Sultan was defeated 6-2 while the duo of junior Nathan Eshmade and sophomore Erik Johnsson fell 6-4. The Aggies took a 1-0 lead, meaning the Gauchos would need four singles victories to claim the match.

The Gauchos quickly tied the match with a one-sided win from sophomore Morgan Mays, playing on court three. Mays took his eighth singles victory in a row, winning in straight sets of 6-2, 6-0 to put UCSB on the board 1-1.

Freshman Cody Rakela was the next to finish and his win gave his team a 2-1 advantage in the match. Rakela defeated his opponent on court four in straight sets of 6-4, 6-4.

The Gauchos were in need of two more singles victories to take the conference match, but fell just short, as only sophomore Teague Hamilton was able to add a win for Santa Barbara. Galskov, coming off of injury was unable to find his rhythm on court one and was defeated in straight sets. Hamilton battled through three sets and won 5-7, 6-4, 7-5 on the sixth court, but it was not enough as the Aggies took the slim victory 4-3.

UCSB got off to a better start Sunday morning at UOP as Mays and his partner junior Andrew Riminton took a 6-2 win on court three to begin doubles play. The Tigers tied it up on court one and the doubles point came down to Eshmade and Johnsson on court two. In a tie break, the Gaucho duo took a 7-6 win to put their team up 1-0.

Santa Barbara and Pacific split the singles matchups 3-3 to give Santa Barbara a 4-3 win – just the team’s third on the road this season. The three wins from the Gaucho side came from the same three in the earlier match with Davis.

Hamilton added his second straight win of the road trip with his straight set victory on the sixth court. He was the first to finish, winning 6-5, 6-2 and put his team up 2-0. Mays followed just after with his 6-3, 6-4 victory. This win extended his singles match streak to nine straight wins and moved him back up to the second spot on the roster.

Rakela was the one to seal the match for the Gauchos with his hard fought victory on court one. The freshman took the first set 6-4 before being bested in the second 3-6. In the third and final set, Rakela blew by his opponent 6-1 to ensure the Gauchos a victory on this long trip.

The final match of this road trip was all too familiar at this point in the weekend for UCSB. Once again the Gauchos found themselves in a match decided by one point, and fell 4-3 to a hot Fresno State team. The Bulldogs capitalized on the doubles point and UCSB split the singles matches for the third straight time.

“It was a tough loss,” Mays said. “But they were a very tough team. It goes to show you how important the doubles point is.”

Eshmade, who struggled in the two matches prior, finally found his feet while playing away and grabbed a win on the number one court. He took a one-sided victory in straight sets of 6-1, 6-2 to give his team some hope for the overall win.

The match came down to the number four court where Rakela found himself down 1-0 and already losing the second set. The freshman battled back to force a tie breaker in the second but was edged out 6-7 to give the Bulldogs the home victory.

“It’s the last part of the season so this is what matters now,” Mays said. “We just need to step up. We are all really pumped for Cal Poly.”

The Gauchos will return home this Saturday to renew the Blue-Green Rivalry against a tough No. 49 Cal Poly team. The Gauchos, who currently stand at 8-0 at home, will be looking to become the first team in school history to post an undefeated home season. The action is set to start at 2 pm at the Rec Cen courts.