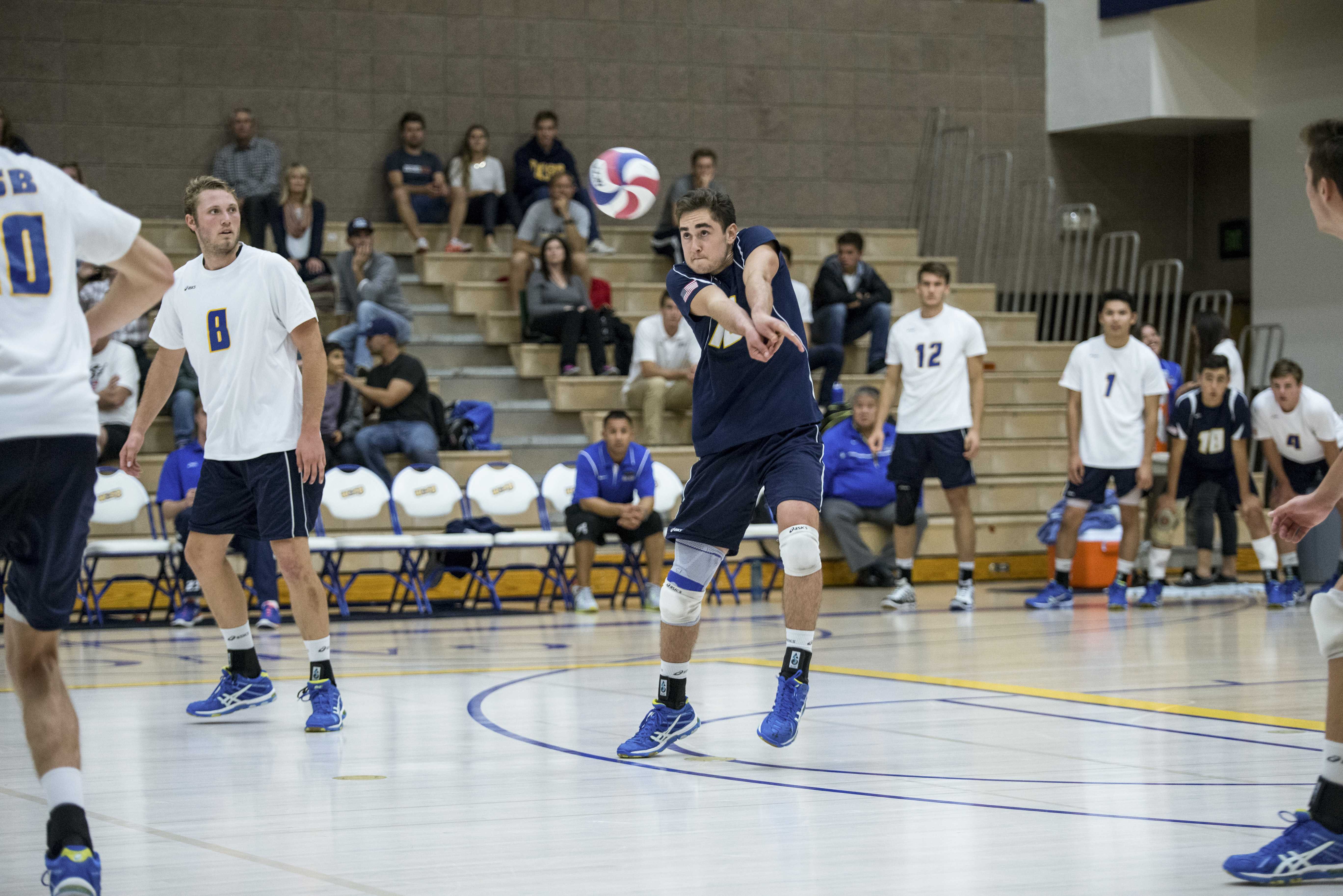 Hayden Boehle passes a swing from the outside. Eric Swenson/Daily Nexus

It was the seniors who led the way on their special night on Friday as the No. 9 UCSB men’s volleyball team defeated UCSD 3-0 in redshirt seniors Kevin Donohue, Weston Nielson, Jake Staahl and Vaun Lennon’s last matches in Rob Gym.

“We could have played a lot better. They played one of their best matches of the year,” junior setter Jonah Seif said. “They easily could have taken the first game and it showed that you really can’t take any match for granted. We were happy to just get the win and move on.”

Before the match, the four seniors on the roster were honored, with Donohue, Nielson and Staahl playing their last match at Rob Gym, and Lennon sitting on the bench after an unfortunate injury that led to ACL surgery earlier in the year. It ended up that the three seniors on the court that led the team to victory with their play Friday night.

“All of the seniors are vital to the team,” Delson said. “They bring a sense of calm to our team and they lead us younger guys both on and off the court. There isn’t a situation they have been in and those guys have been huge to our team this year.”

The first game was one that San Diego competed in throughout, and up 17-14, it looked as if they might take the game. Santa Barbara benefitted from a collection of errors by UCSD’s hitters and the Gauchos were able to tie the match at 19-19 on an attacking error from redshirt freshman opposite Tanner Syftestad. From this point on, the Gauchos never went down in the game, and they took the first set 25-23 on a service error by sophomore outside hitter Ian Colbert.

“We played down to their level in the first set,” redshirt sophomore outside hitter Jacob Delson said. “We had a huddle at the end of the set and talked about forgetting that it was senior night and that we were playing a team that hadn’t won in MPSF all season. We just had to wake up and we did a bit after that.”

UCSB took the lead at 2-1 in the second game and they didn’t let it up, going on a four-point run to lead 4-1 and running away with the game after that. Nielson was the star of the set with four kills and four digs, and Seif added seven digs on his way to 16 total in the match to lead the team.

The third game followed the same storyline as UCSB took the lead early and the team never relinquished it. Donohue had six kills in the set, ending the match with 12 kills to lead the team, and Seif added three service aces to bring his total to four in the match. Donohue ended the match with two kills as he and his teammates hope to go on the road and bring home a trophy.

“Donny played a great match. He was the go-to guy in game one” Seif said. “He, like all of the seniors, definitely really wanted the win.”

The Gauchos have two matches left this week before MPSF playoffs, taking on No. 3 Pepperdine on Wednesday and No. 15 Stanford on Saturday. They will be hoping that the momentum from the win against San Diego will propel them on a run deep into the playoffs.