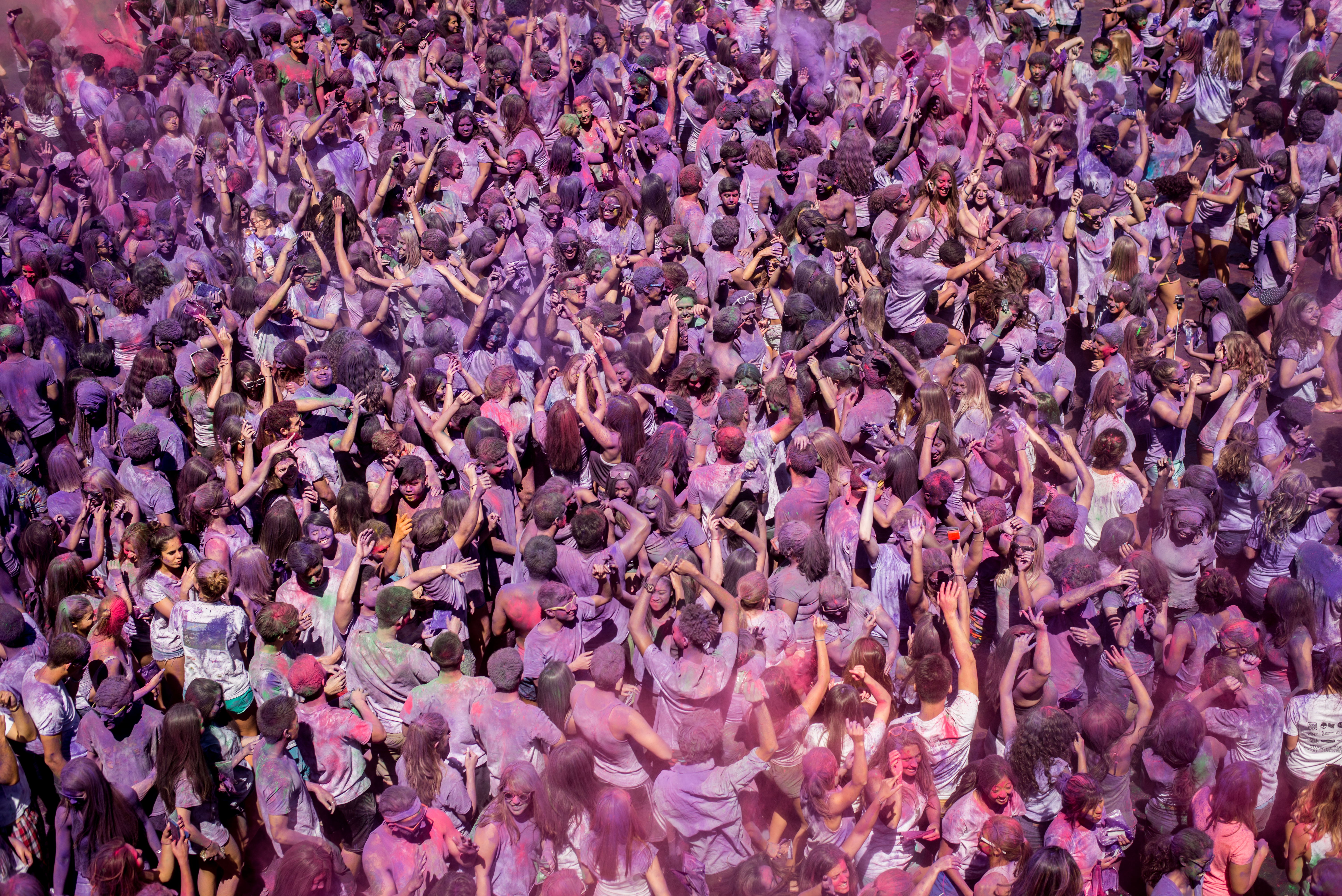 Over 2,000 students celebrate the Hindu festival by showering each other with packets of colored powder. Lorenzo Basilio/Daily Nexus

UC Santa Barbara Indus hosted their annual Holi event this Sunday on the beach behind the Anacapa and Santa Cruz Residence Halls, drawing over 2,000 students to celebrate the traditional South Asian festival of colors with music, dance and thousands of packets of colored powder thrown into the air.

Holi is a spring festival popular in many parts of South Asia rooted in the Hindu religion and celebrating color, social equality and love. While the festival’s date in India changes from year to year and took place on March 6 this year, Indus held the event on April 12 due to scheduling conflicts with other events last quarter. This year’s Holi event sold the most colored powder and attracted the largest crowd since Indus began hosting the event in 2013.

“It’s meant to bring everybody together, so in India it would be like to celebrate the end of winter, the beginning of spring harvest time, so it’s a happy time,” Pal said. “In India there’s the caste system with lots of divisions, but when people play Holi you’re just supposed to all be wearing the same stuff, nobody knows what division you’re in — you all just get colorful like the same way.”

According to Pal, UCSB Indus’ Holi event has similar meaning to the traditional celebrations taking place in India.

Indus Treasurer and third-year economics and mathematics double major Nitin Seelim said not only has the event drawn bigger crowds over the years, there has also been an increase in diversity among the students who attend.

“It used to be South Asians specifically, but now we are getting more diversity,” Seelim said. “We started selling Holi powder last year and it was first conducted on this campus two years ago. Last year, we had about 1,000 people, now we have over 2,000 people, each year our turnout is much greater, and [we make] more money selling Holi powder which we use to help conduct other events.”

Seelim said he believes the Holi event was unique because it was hosted on the beach, making for a more aesthetically pleasing backdrop and easier cleanup.

“In India it’s usually done on the streets or alleys where people just throw powder at each other. Not the best scene to look at,” Seelim said. “But beside the beach on campus, it’s very nice and much easier to clean up because the beach cleans it up. It happens once a year, a safe party kind of thing, but you get to learn more about the culture of India — how some events happen — and it attracts more people to our club.”

According to Roshan Roy, Indus social chair and third-year biopsychology major, Holi is a way for the university community to learn more about Indian culture and add more variety to the UCSB social scene.

“It adds a lot of diversity to our campus and enriches the culture so that we’re not a campus about partying and drinking,” Roy said. “It’s about learning about different cultures and overall just enriching our overall education.”

Alumnus Vinay Gupta said he has attended Holi every year since enrolling at the university when Indus began hosting the event.

“Holi is growing in a lot of universities,” Gupta said. “It’s kind of becoming like a trend when it originally started as an Indian holiday, mainly because it’s a lot of fun. Everyone’s covered in color so you can’t tell who’s who, so it can make a statement about equality and race.”

First-year undeclared major Jonah Calio said Holi exceeded his expectations and that he plans on attending next year.

“I wasn’t expecting it to be as big as it was. It was way more awesome,” Calio said. “I didn’t think I would get this colorful either. I just liked seeing people you know and hitting them with color.”

“There were a lot of people, and it was really fun,” Fulton said. “I didn’t think there was going to be as many people and as fun as it was. It was a good community experience. I really like the whole culture aspect of it, too. Everybody was friends, it doesn’t matter what you were doing; powder was everywhere.”