The Daily Nexus
Volleyball
UCSB Volleyball Players Use Art to Help Community
April 9, 2015 at 5:08 am by Sarah Stigers 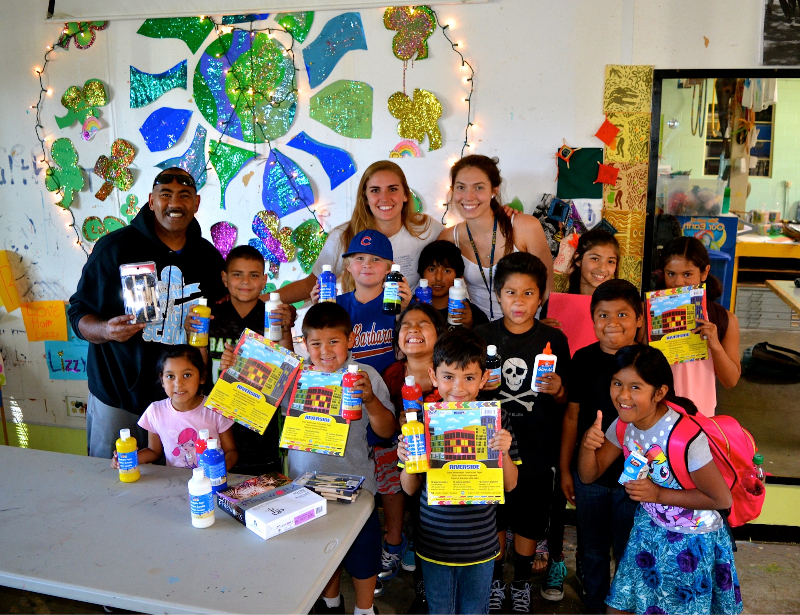 While most student athletes take their offseason as a chance to relax and get ready for the following year, sophomore Allie Sullberg of the UCSB women’s volleyball team is using her time to benefit the Santa Barbara community.

Sullberg has created Supply & Create, an organization that donates new and used art supplies and delivers them to youth programs in the Santa Barbara area, such as the Boys & Girls Club and the YMCA. The idea was created after Sullberg taught art class while interning for “Arts for Humanity!” over summer and noticed that art supplies were scarce.

“I think it’s cool when people see an athlete doing something other than their sport,” Sullberg said. “I like working with people and helping people, and I love making art. I thought this was a good way to mesh the two and make a difference in the world using art.”

On the court, Sullberg dominates as a starting middle blocker for the Gauchos. In her two seasons at UCSB, she has recorded 188 saves and 216 kills.

Off the court, Sullberg finds her passion as an art major, and aspires to be an art therapist.

“I think that being a student athlete has made me thrive in a busy schedule and learn how to balance my time,” Sullberg said. “That is one of the reasons why I think I am really able to get things going and make decisions and motivate myself to do this.”

After accumulating over 4,000 dollars in arts supplies and raising 900 dollars via GoFundMe, Supply & Create is looking to expand its impact by introducing on-campus drop boxes for UCSB students to donate their own art supplies to the cause. In addition, Sullberg hopes to eventually take this idea and turn it into a UCSB campus organization to create more positive change in the art education of Santa Barbara youth.

Along with Sullberg, her volleyball teammate, sophomore outside hitter and libero Ali Spindt, is also actively involved with Supply & Create. In the 2014 season, Spindt topped the conference leaderboard week after week in total digs and digs per set, ending her season averaging 2.81 digs per set and totaling 315.

“I think it’s really important for kids to have the opportunity to express themselves artistically, and this was such a great idea from [Sullberg],” Spindt said. “It’s very rewarding.”

In hopes to use the large number of resources the organization is exposed to due to its closeness with the UCSB athletics program, Sullberg and Spindt plan to use UCSB’s Student-Athlete Advisory Board to encourage participation from other Gaucho athletes.

“This helps us because we can have a lot more resources,” Spindt said. “Having access to all the teams definitely helps a lot. We just put the bins out and we are trying to really get this going this quarter.”

Most recently, the organization has received a donation of carpet squares from Art From Scrap, a Santa Barbara-based arts organization. Sullberg and Spindt plan to incorporate this donation into a “special projects” aspect of the program and allow students to work with all types of art media to further inspire creativity.

“We are trying to get people on board,” Sullberg said. “Anyone that is interested in helping in any way would be awesome.”

The recently added on-campus drop boxes can be found at the SRB, UCEN and ICA Building, as well as other potential locations. Supply & Create is seeking help from the UCSB community. Students interested in being a part of this organization can contact Sullberg and Spindt at artistallie@yahoo.com.

A version of this article appeared on page 12 of April 9, 2015’s print edition of the Daily Nexus.