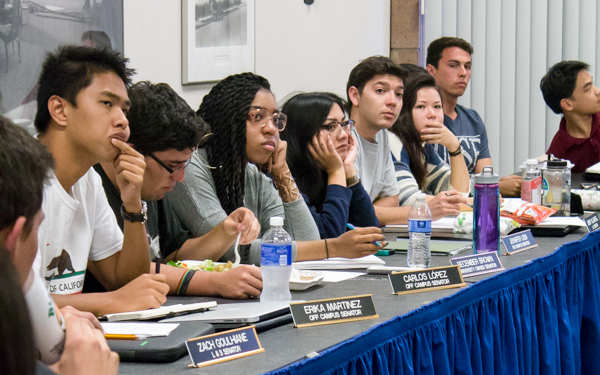 This Wednesday, Associated Students Senate met to review the events of Deltopia, which were widely accepted as successful, as well as to discuss mental health counseling services, the expansion of UCSB Counseling and Psychological Services and more. Paris Cullen/Daily Nexus

The Associated Students Senate met Wednesday night at the UCen in the Flying “A” room to discuss the expansion of Counseling and Psychological Services (C.A.P.S), the present campaign to condemn UC budget cuts, the future of Deltopia, Isla Vista self-governance and UCSB Extension Students’ access to campus events for their weekly meeting.

The meeting centered around discussions about mental health counseling services, focusing on funding from the state and the availability of student resources in the advent of tuition increases and budget decreases. The meeting also addressed the success of this year’s Deltopia festivities and the continuing security of I.V. in future years with regard to the festival.

The senators heard from representatives from C.A.P.S about the organization’s future plans and needs. Assistant Clinical Director of C.A.P.S Turi Honegger said a new wellness center is going to open in I.V. in 2015.

“I have seven offices that are going into Isla Vista,” Honegger said. “It’s going to be above the Isla Vista Neighborhood Clinic. Four of those offices are going to be dedicated to full-time psychologists. That will be available for all students and any I.V. resident can get a consultation.”

According to Honegger, the C.A.P.S program is very popular with a significant portion of the student body, bringing in nearly 25 students for initial mental health assessments on a daily basis.

“That’s over one hundred a week, and over the course of a quarter that’s over five percent of the student body,” Honegger said.

“We’re doing as best we can to provide mental health services to students, but expansion can be done in this situation,” Ong said. “For example, as of now we don’t have a dedicated space for students to come in to talk, usually when drop-ins happen we try our best and maybe a clinician can give up their office for twenty minutes for us to use.”

A.S. President and fourth-year psychology and sociology double major Ali Guthy introduced the Senate to the Dear Governor Brown campaign which starts Friday and aims to educate students regarding the “financial irresponsibility within the UC system stemming from Governor Brown’s plans for higher education.” The campaign mainly focuses on his plans for expediting graduation and expanding online education.

According to Guthy, the irresponsible use of information by the governor’s office is “disconcerting” to the A.S. Senate.

“The governor’s office has desired to increase summer sessions as a way to expedite graduation rates,” Guthy said. “But they weren’t aware that Pell grants and other aids don’t cover summer sessions. And summer sessions are usually more expensive because they are paid by units.”

Guthy said she is concerned about the lack of a long-range budget planning for the UC system which is aggravated by Brown’s endeavor to make budget allocations on a short-term basis.

According to Guthy, the governor is cutting funds from the wrong places, and she disagrees with the suggested changes.

“The governor is being insistent on trimming the fat of the UC,” Guthy said. “Unfortunately, it seems like the ‘fat’ he is trying to trim is the student resources and services that we get. I would characterize it as trying to industrialize the student experience. Moving it [education] online and making it faster doesn’t make it better.”

Guthy discussed the halted plans for redesigning the A.S. main entrance, saying A.S. would seek funding from alternative sources for the proposed new entrance from campus to the A.S. main office due to its predicted cost amounting to $10,000 as opposed to the projected $5,000.

“My plan is to go to the UCen Governance Board and talk with them about potentially contributing to the design and funding, if that’s something we’re still interested in pursuing,” Guthy said, “because there is a renovation fund for the UCen, so I’m curious to see if they would be willing to contribute to that project.”

A.S. Executive Vice President of Local Affairs (EVPLA) and fourth-year psychology major Cameron Schunk spoke to the Senate about Deltopia’s success and the upcoming planning for next year’s event to ensure continued success of the event. Schunk said he is currently recruiting participants from the Office of Student Life in order to get involvement from a diverse pool of students.

“This coming week we are going to be having what I am calling ‘Del-scussion,’” Schunk said. “It’s going to be an opportunity for everyone to get together and have a dialogue about what they liked about this Deltopia and what they really didn’t like.”

“Were still working on deciding on board structure and actual boundaries of the district,” said Schunk. “The issue is not so much where is the money coming from anymore. It’s who’s the financial host going to be.”

Schunk also discussed a tentative plan for Greek organizations within I.V., suggesting a series of Greek workshops centered around educating Greek life on their responsibility to the campus and I.V. community.

“Part of the goal there is to empower Greek students and make them feel as if they can be stewards of this community,” Schunk said.

The senators also voiced different opinions on whether UCSB Extension students who do not pay A.S. fees should be able to attend student-only events like Extravaganza.

“They could be allowed to attend, but they would have to pay,” Lau said. “So for example, The Warm-Up was five dollars for us, but Extension students would pay way more than that.”

“Program Board does not like this idea at all because this opens the door to other people, like SBCC students or members of the public saying, ‘Hey they get to buy tickets, why don’t we get to buy tickets?’” Fernandez said.

A version of this story appeared on page 9 of the Thursday, April 9 print issue of the Daily Nexus.