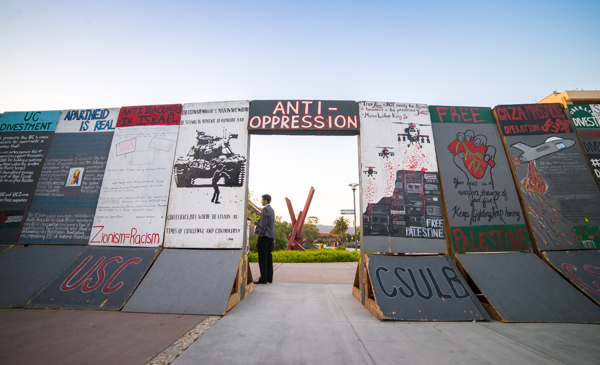 Originally assembled at UCI in 2012, the mural has been transferred to and displayed on college campuses as far as UC Berkeley and Arizona State University. The wall seeks to encourage discussion on the Palestine/Israel conflict, though some students have expressed concerns it does not represent multiple viewpoints. Lorenzo Basilio/Daily Nexus

Students for Justice in Palestine (SJP) constructed a mural wall in the Arbor on Monday to remain until tomorrow that displays artwork and messages illustrating the Israeli-Palestinian conflict in the West Bank and Gaza Strip region.

The wall was originally constructed by SJP at UC Irvine in 2012 and has since been transferred to multiple university campuses, including UC Berkeley, UC Merced, Stanford, Arizona State University and the Claremont Colleges, to promote a UC resolution to divest from companies allegedly profiting from human rights violations in Palestine/Israel. The Associated Students External Affairs Committee will consider this campus’s divestment resolution at its 6 p.m. meeting today after tabling the proposal at its meeting last week.

Second-year music major and SJP member Daniel Moltke said the wall was built in order to spark discussion among the campus community about the ongoing conflict in the West Bank and Gaza as well as to inform interested students on the current divestment resolution.

Third-year history major and SJP member Aaron Reveles said the wall travels to different campuses each spring quarter or semester in order to educate UC students statewide about the UC’s financial holdings in corporations such as Raytheon, Lockheed Martin, Northrop Grumman, Caterpillar and Hewlett Packard, which all allegedly profit from Israeli government policies in the Palestine/Israel region.

“This is a communal wall that travels to different campuses,” Reveles said. “We drove down to the last school it was at, which was Pitzer College in [Pomona], with a U-Haul truck we rented out. A group of us worked hard and put it together.”

According to Moltke, the UC divestment campaign regarding Palestine/Israel reflects a similar past UC resolution calling on an end to apartheid in South Africa.

“There’s people that were big in the anti-apartheid movement in South Africa, who mentioned specifically the UC’s divesting was a significant part in the turnaround of their movement,” Moltke said. “So we hope that by getting all of the UC’s on the same page, we can get the regents to stop funding these corporations that perpetuate violence and oppression.”

However, first-year economics major Jack Tannenbaum said while he believes the wall facilitates political discussion, its messages do not represent multiple perspectives.

“I’m so happy I’m on a campus like UCSB that facilitates free speech,” Tannenbaum said. “I think that it’s great this wall is up and that it’s starting political discourse. But I really wish … that there had been some form of collaboration, or this wall had shown two sides of the story … I believe it really, really does not.”

Tannenbaum also said the campaigns associated with the wall represent an “affront” to Jewish self-determination.

“On this board it says Zionism equals racism … the general definition of Zionism is the belief in having a nation for the Jewish people free from persecution with the right of self-determination,” Tannenbaum said. “Saying that idea is racism — the existence of a Jewish state is racism — personally affronts my belief in the idea that I can have a place as a Jew where I am free from persecution.”

According to Moltke, despite the presence of the wall, Palestinian students often feel victimized and afraid to voice their opinions at public forums due to potentially consequential future circumstances.

“There are Palestinians who are afraid to speak at these public meetings because someone pro-Israel can record them and send it to the IDF [Israel Defense Forces],” Moltke said.

Moltke said SJP student groups across the UC feel compelled to display the wall and spark discussion among students because of the challenges Palestinians face expressing free speech abroad.

“The Israeli government won’t let you into Palestine if you’re pro-divestment or anti-Israel. There are no airports in Palestine so you have to go through Israel and if students speak out,” Moltke said, “they may never get to see their families in Palestine. So it’s up to us to get the word out.”

First-year biology major Hannah Ellenhorn however said she does not agree with the wall and its illustrations supporting divestment, and believes that the resolution to divest from companies profiting from human rights violations in the Palestine/Israel area is anti-Semitic.

“At the core of the conflict is a refusal for Arab populations to recognize the right of Jewish self-determination in Judea and Samaria,” Ellenhorn said. “The recent move for college campuses to boycott Jewish-owned businesses based in Israel is nothing more than blatant Jew-hatred masked in a degenerate view of social justice.”

According to third-year computer engineering major Nader Khalil, however, United States’ corporations should cut funding to companies profiting from human rights violations everywhere in the world, no matter who the perpetrators or victims are.

“Human rights on all scales are important,” Khalil said. “I see the West Bank Settlements as an issue. There is hate from both sides. A practical solution would be to cut American funding of these Israeli settlements and other war crimes that were committed on Gaza. Have a fair trial for the crimes that happen and move from there.”

A version of this story appeared on page 1 of the Thursday, April 9 print issue of the Daily Nexus.

The IDF is too busy fighting terrorist groups like Hamas (who are paid to keep Palestinians refugees by the Iranian government) to pay attention to some Californian college student talking about BDS. Find a better excuse for your cowardice.

Perhaps Ashley you want to talk in person and say the things you really think directly to me. I can meet you in the bathroom for about 5 minutes.

“In other news, _____ Chapter of Students for Justice in Tibet have insisted that the university cease doing business with any Chinese company.” – Imaginary news report that would never occur because the bigots who attack Israel don’t actually care about “occupation,” they want to destroy the Jewish State.

Grave human rights violations against religious and ethnic minorities have become increasingly commonplace in the Muslim world. Not only Jews are targeted, but, as the world has seen, Christians, Hindus, Baha’i, Alevis, Shi’as, Sunnis — and anyone who does not conform to some self-appointed person’s vision of Islam. Muslims are burned alive, Christians’ heads are cut off on a beach, a Christian couple in Pakistan is thrown alive onto a burning kiln, churches and Bibles are not allowed in Saudi Arabia, and there are sign-posted roads and turn-offs for anyone not Muslim. It is hard to get more “apartheid” than… Read more »

The two 6th century monumental statues of a standing Buddha had been carved into the side of a cliff in the Bamyan valley in the Hazarajat region of central Afghanistan. Even if done today, with our laser levels, pneumatic tools, and lifting equipment, the creation of these statues was no mean accomplishment. But these, these magnificent artifacts, were done 1500 years ago. In short order Muslims destroyed them in March 2001 using weapons of war. Thus, works of art that no Islamic society could ever, ever create (you’ve heard of a Muslim Beethoven perhaps?) were blown to smithereens with equipment… Read more »

The official media narrative is that these differences are the results of eons of oppression, checkpoints and blockades. Fair enough. But then why does the IMF put Israel’s GDP Per Capita well ahead of the oil rich kingdom of Saudi Arabia? Saudi Arabia has no Israeli checkpoints, no Israeli soldiers or planes flying overhead. It has wealth literally pouring out of the ground with a fifth of the world’s petroleum reserves. And yet the IMF puts it 13 places behind Israel and the World Bank puts it 8 places behind Israel. The only Muslim countries with a better GDP Per… Read more »