The Daily Nexus
Opinion
Greek Life: Breaking the Stereotype
April 9, 2015 at 6:03 am by Kyle Stivers 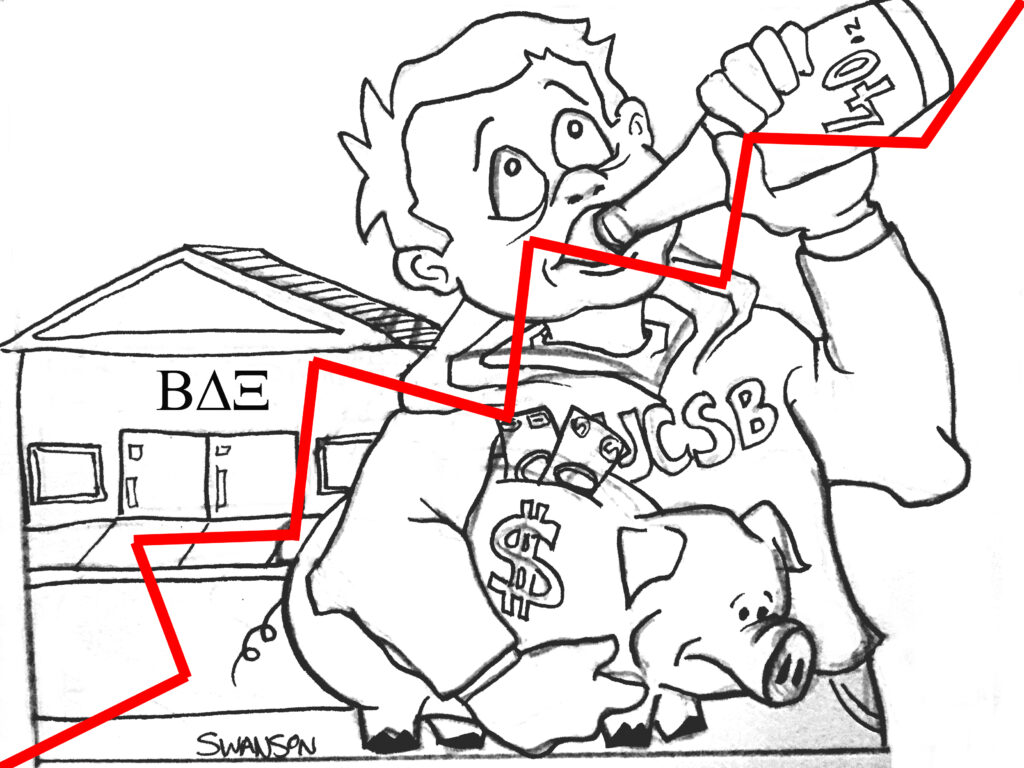 Over the last year, Greek life at UCSB has come under heightened scrutiny due to the closure of several campus-recognized fraternity chapters. This, along with recent widespread media coverage of the unacceptable video that shows members of a fraternity from Oklahoma State singing a blatantly racist song, has contributed to the negative stereotypes that surround fraternities in general. However, the Greek organizations that continue to thrive at this school do so because they are above many of the negative clichés often associated with them. These stereotypes include, but are not limited to: lack of diversity in membership, being viewed as drinking clubs and a lax attitude toward sexual assault. My opinions come from experience in the Greek system, but seeing as I am a male, I will not pretend to fully comprehend the inner-workings of Panhellenic sororities nor their members’ beliefs on these matters.

As a member of a social fraternity at this school, I take offense when people assume that our roster is made up entirely of the “typical” young men that fraternities have become infamous for on a national level. Contrary to popular belief, heterosexual white students with rich parents do not even come close to accurately representing the demographics of these organizations. First and foremost, there is absolutely an overlap between the LGBTQ community and the Greek community at UCSB. Most social fraternities and sororities on this campus have upwards of 100 members, which means that most of these houses probably have multiple members that identify as LGBTQ. I know that my house does. Homophobia is just as intolerable within Greek life as it is within the community of UCSB. Secondly, racial and religious diversity is celebrated and encouraged among UCSB’s fraternities and sororities. You will find Greeks from all ethnicities and belief systems that are represented at our school. One of the most common misconceptions regarding the demographics of Greek life is that it consists mainly of people who come from wealthy families. If you took the time to talk to some of the Greeks around campus you would find that most of them have jobs that they depend on to pay for school, books and especially dues. Financial obligation is an integral part of Greek life anywhere, and at UCSB, many members of these organizations are paying dues out of their own pockets. The takeaway here is that the Greek community at UCSB is as diverse as the student population, and just like the majority of students at this university, Greek organizations don’t tolerate racism, sexism or homophobia in any way, shape or form.

One might think, “So what? Just because a fraternity is diverse doesn’t mean their behavior will be any different than what I’ve come to expect.” To those people I say, it’s time to change your expectations. Greek life at UCSB consists of so much more than partying for the sake of partying. The first indicator should be that fraternities and sororities typically have an average GPA that is higher than that of the collective student body. In fact, most Greek organizations will subject themselves to ‘social probation’ if their house GPA drops too low. People say that UCSB students like to “work hard, play hard.” Well, many Greeks certainly subscribe to that mantra. In addition to school and social obligations, fraternity and sorority members are required by their organizations to complete a certain number of community service hours each quarter. On top of that, each Greek house throws a unique philanthropic event each year to raise money for important causes like suicide prevention, breast cancer awareness and the Special Olympics.

Apart from community service and philanthropies, Greek organizations, fraternities in particular, are also responsible for hosting some of the biggest parties in Isla Vista. But what people typically fail to realize is that these parties are inherently much safer and more controlled than the standard I.V. rager. One reason for this is that every fraternity has several individuals in charge of risk management. These people are responsible for walking around the party to make sure no one is doing anything stupid or dangerous, and also watching the entrance/exit to ensure that those leaving are capable of getting home by themselves or with friends. For events that are expected to be exceptionally crowded, many houses will hire private security. The primary concern of any fraternity is that the attendees of their parties feel safe. Which brings us to the most damning stereotype of all: the perpetuation of rape culture.

The ‘R’ word is a very hot-button issue around college campuses, and for a good reason. College is a time when young adults come together in clashes of alcohol and loud music, which will often lead to the exploration of consensual sexual desires. Unfortunately, there are some despicable people out there who have chosen to ruin the lives of some poor individuals and, in doing so, have instilled fear and anxiety in an environment that is supposed to feel safe for everyone. I have nothing but contempt for anyone who does not see sexual assault as a major issue that needs to be taught about and discussed within any and every college campus. That being said, stereotyping the Greek community as a group of people who participate in and encourage this type of behavior is nothing short of abhorrent and unproductive. This issue pertains to all of Isla Vista and college campuses at large, and is not exclusive to certain clubs, teams or organizations. The reality is that Greeks at UCSB have taken a firm stance against sexual assault, and are actively educating their own members and others within the community of the dangers accompanying college life. In addition to sexual violence workshops that all Greek members are required to attend, sometimes multiple times a year, fraternities and sororities frequently collaborate in hosting events to bring awareness to the problem. For example, Walk a Mile in Her Shoes is an upcoming event hosted by Sigma Pi and Kappa Sigma fraternities at UCSB. On April 17, men from these fraternities will walk a mile in high heels in an effort to raise awareness to sexual assault prevention and show solidarity with the female residents of Isla Vista. While it is undeniable that sexual violence is an issue at UCSB just as it is on every other campus, it is fallacious to insinuate that Greek life at this university perpetuates it.

The lesson here is that fraternities and sororities at UCSB are not the homogenous, relentlessly partying, unsafe organizations that the media would lead you to believe. In fact, Greeks are more likely than not to have higher GPAs than the average student, and, through volunteering and philanthropies, frequently do more community work than the average Isla Vistan. From experience I can say that most members of the Greek community are genuinely good people who have the same goals and aspirations as their fellow Gauchos. So the next time you hear a story about some fraternity or sorority on the other side of the country doing something that fits the portrait society has painted of them, just remember that Greeks at UCSB are actively trying to break the stereotype.

Kyle Stivers is a fourth-year film and media studies major from the Bay Area.

this is well written. However, this is coming from a member of a fraternity who got drunk to a charity event hosted on campus last quarter. It seems to me that although there are great members, there will always be stereotypes that need to be defeated. Kudos to you for joining for the right reasons.

I understand you want to defend your brotherhood and you and your frat maybe a group of really great open people but please do not patronize me and say frats are diverse. Overall the composition of the Greek system is composed of white people and it’s not stereotyping when it’s a fact that around 4% of members on average are non white. I don’t have anything against frats or sororities they can be a catalyst to great charitable work and networking but I think there needs to be a higher standard that they are held accountable not just when someone… Read more »

I think the point he is making is that the stereotype of ALL Greeks houses lacking diversity, inaccurately attributes that sentiment to houses that are in fact diverse. This is also about moving Greek life into a better place, as is happening now. Of course there are things that need to be changed or improved. And that can happen better when people positively encourage a community, rather that shame them. I think that’s the purpose of the article, to show that there are things that people don’t understand about Greek life but also that Greek life understands that overall, things… Read more »

If you are committed to battling sexual violence and homophobia within your community, just having members who are LGBTQ or of color is not enough. Not all fraternity men or sorority women I’ve encountered are uninclusive or intolerant, but many of my experiences with friends dealing with sexual violence, street harassment and racial intolerance/epithets/exclusion have been with members of the Greek community. If you are committed to battling these things, you continuing to say “but wait wait wait we aren’t like that, that’s just a few of us” just makes me think you’re trying to erase your brothers’ and sisters’… Read more »

The racist song was at the University of oklahoma. Not oklahoma state btw