The Daily Nexus
The Brew Review
Bomber Diary 3: One Girl Drinks One Beer, Because Science
April 9, 2015 at 5:00 am by Allison Wright 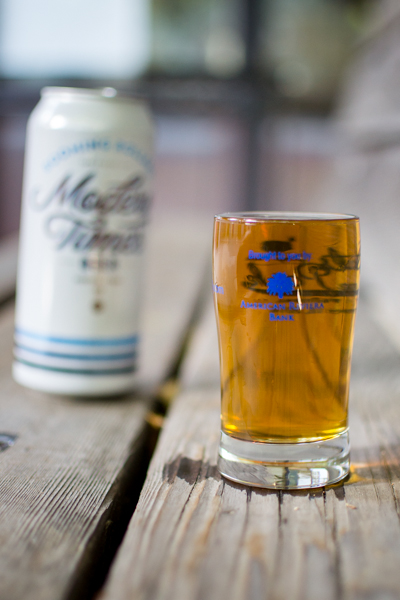 3:49 “Hey Lorenzo, would you read a story about someone narrating their life as they drink a beer? Like a live-Tweet session over the course of a pint?”
“Yeah, I’d read that.”
With a cric-pop, the aluminum seal of Modern Times’ Booming Rollers breaks. I flick back the tab and take a triumphant sip. I’m doing this.

3:51 Lorenzo, the Nexus’s resident photo editor, grabs his camera and claims to have to, “Shoot the wall, y’know, Pink Floyd.” He actually means the structure built in the Arbor erected by Students for Justice in Palestine. I do an Aziz Ansari voice, “Awwww man I wanna go with you, but now I’m drinking this!” I point at the can in my hand. “Fuuuuck.”

4:00 Not a lot has happened to me yet. I would mark my ingestion-of-beer rate at approximately one sip per two to three sentences. Should I up my consumption? What if I finish this beer too soon? Did I eat enough carbs before this afternoon drinking session? Am I dayging right now?

4:01 Pre-drinking state: Lunch, consisting of vegan minestrone soup and a triangular, cheese-filled carbohydrate, occurred at approximately half past noon. Following the ingestion of calories, I caffeinated — one dose of naturally caffeinated and sustainable mate. The calories have already evacuated my stomach, so it’s already sending cues to my brain: “Hey, what’re you gonna do for dinner? More cheese? Quesadilla or grilled cheese sandwich?”

4:03 Okay, I’m decidedly at a typical level of alcohol-consumption preparation. Let’s talk about that alcohol.
Brewery: Modern Times
Beer: Booming Rollers
Characteristics: “Hoppy, Citra, IPA”
Style: India Pale Ale
ABV: It’s not on the front of the can. Better take a sip so I can see some new angles.

4:08 ALERT ALERT. Red flashing lights strobe across the room. A raid is in progress on my mini-fridge. Three of the beers left in that severely splattered and magnet adorned chest belong to me. I stake my claims. All is well.

4:09 “ALC. 6.8.% BY VOL.”
Time to reassess. Will that faint, leftover jitteriness from the mate hurt me by the time I reach the bottom?

4:15 Time for some more scientific measurements. Based on a “hot vs. cold” test, I determine that I have consumed two-fifths of my alcoholic beverage. (I should mention the subtle buzz beginning to impact my concentration.) Method: place thumb at boundary on can between cold and room temperature, which coincidentally falls between “Modern” and “Times.” Use other thumb to measure can and record: “Three inches below and two inches above the hot-cold barrier.” Some math ensues! By now, it’s …

4:18 I realize that my original assessment no longer applies. My continued sippage nullifies my previous measurement. There’s something about drinking that makes shoddy scientific inquiry obsolete. Maybe it’s the fact that no self-proclaimed beer fan could let a brew get warm. Maybe the beer level remains in a constant state of diminishment. Maybe I’m an insatiable alcoholic.

4:23 Let’s talk about that Booming Rollers, which I have thus far woefully neglected. Modern Times throws a healthy helping of Citra hops into this IPA. I can’t say why they insist on adding the “hoppy” tasting note to the can, though. If this is an IPA, I hope that hoppiness is a given.

4:25 Booming Rollers certainly has a hop presence. If not at the front of the sip, that is, at the beginning of a taste, it hits the palate with a light wash towards the back like a low tide that leaves sea foam and hops upon a flat, sandy beach. It’s subtle, quiet.

4:28 Bathroom break time! I will drop my jaw in awe if this is the last time this happens.

4:31 I return to find my desk chair pilfered! It’s okay. Someone told me once that sitting tightens your hip-flexors, and one can reduce the tightening of the muscle group by standing more, sitting less.

4:33 I have successfully constructed a standing desk. (I drunk-structed it. I’m sorry.) You can do this at home or in your office environment! First, lose your chair. If you cannot willfully part with it, hire a friend or sinister back-alley villain to break into your place of work and remove it from the premises. Next, use whatever is within arm’s reach to create a stand for your keyboard (or entire laptop). Then, tilt your monitor, or push back your screen if you have a laptop, for optimal viewing abilities. I used two grammar books, but two of Harry Potter four, through seven should work effectively. Stand! Recall a real bar, in which you order your pint in a real glass!

4:43 Oh shit, I haven’t taken a single photo. Pause any further sips until I can get photos!

4:47 I attempt a selfie with a DSLR, but the camera fails to auto focus. Alas, dear readers, you shall not see me tipsily clutching a tiny pint.

4:49 Back to the pint! (Get it? It’s a pun on back to the point! Again, I’m sorry.) After topping off the glass, the Rolling Boomers can officially reaches empty. I crush it as a fratstar would and only pretend to shed a tear.

4:50 I expect a whole new beer after transporting it from its aluminum vessel. Maybe I’m too buzzed, or maybe the soft coating of malt on my tongue has inhibited my senses, but I can conclude that I would not fret about sipping Booming Rollers from the can. Perhaps the only difference is the prevalence of the hoppy aroma. But unlike other IPAs that smack you in the shnozz with piney or “dank” scents, Booming Rollers softly wafts into the nostrils. If anything, the pour encourages a scent oriented taste, but it doesn’t take away from the pleasantness of a sip from the can.

4:56 Wow. It’s taken me an hour and eight minutes to ALMOST finish a beer. Hey! Let me defend myself! Modern Times sells cans in pints, rather than in 12 oz. portions like their lesser, canned counterparts. This is no Bud Light!

4:58 After a short rumination, I have a question for Modern Times. Do you measure in an English or American pint?

4:59 One Google search later, I learned something new about the differences between imperial and American pint measurements. They are both one-eighth of a gallon. The difference, you may ask? The original measurement of that gallon. It comes out to 568 milliliters and 473 milliliters, respectively. In other words, I am about an ounce away from finishing 16 oz. of craft beer.

5:03 “Did you think I did an okay job?”
Lorenzo replies, “No you did a great job! Good lighting, great use of aperture, good composition, like the placing of objects. They’re great photos.”
Y’hear that? Fifteen oz. of 6.8 percent beer and I can still do photography. I must not be feeling the beer that much.

5:05 Reassessment: I already have to go to the bathroom again. Someone told me to lower my voice (in other words, I have no volume control). Part of my left thumb is sticky, presumably from beer. I can feel “the glow” rising (I don’t know if it’s a blush for slightly interrupting an important meeting or if it’s actually the glow). I really have to pee again. HashtagSmallBladderProblems.

5:10 I forgot to tell you! Tuesday was National Beer Day! There is a reason why I (sort of) turnt up on a Wednesday! I want you all to know: You need not wait for an arbitrary day dedicated to beer to drink your favorite malt beverage, you need not an excuse to drink at all, you need not adhere to anyone else’s opinions about beer! But if you want a suggestion, pick up a Booming Rollers for a sunny day, pour it for a tasty game of snappa, smuggle it in wrapped-in-brown-paper-bag form and watch the sunset or just drink it on a Wednesday because it tastes damn good without trying too hard. And with that, I sip my final sip.