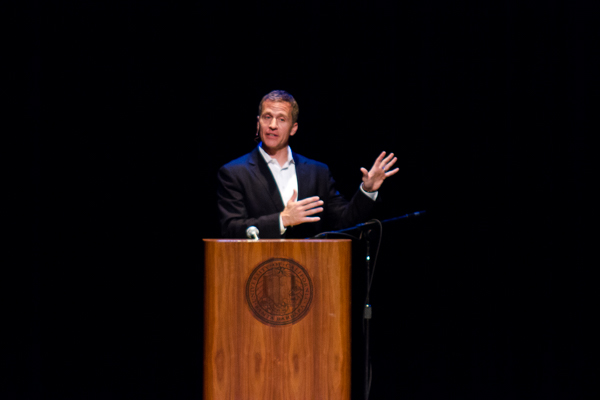 Greitens, who was awarded the United States Armed Forces Bronze Star and listed on Fortune magazine’s World’s 50 Greatest Leaders in 2014 and Time magazine’s 100 Most Influential People in 2013, spoke to a crowd of approximately 250 students, faculty, community members and Arts & Lectures donors. Greitens is also a Rhodes Scholar, a White House Fellow and founder and CEO of The Mission Continues, a non-profit organization which challenges veterans to serve and lead in communities across the country.

Throughout the lecture, Greitens focused on how to grow from personal experiences, stating that growth is necessary to move on from past hardship.

“You cannot bounce back from hardship. You can only move through it,” Greitens said. “No one escapes pain, fear, and suffering. Yet from pain can come wisdom; from fear can come courage; and from suffering can come strength — if we have the value of resilience.”

When most people think of resilience … we cannot bounce back because we cannot go back in time to the people we used to be. There is no bouncing back. There is only moving through – Eric Greitens

Greitens also discussed the importance of meeting obstacles in order to progress in life and said that, as Navy SEALS, he and his colleagues understood the word “frontline” to mean “the place where we met the enemy,” but frontline is not just a “military term.”

“In fact, you have a frontline in your life now,” Greitans said. “Everyone has a place where they encounter fear, where they struggle, suffer, and face hardship. … It is on the frontline of our lives that we earn wisdom, create joy, forge friendships, discover happiness, find love and do purposeful work.”

According to Greitens, the most important factor in dealing with hardship is figuring out to work through life’s challenges.

Greitens said he believes resilience is a way of working through hardship rather than returning to a state of being prior to experiencing hardship.

“When most people think of resilience … we cannot bounce back because we cannot go back in time to the people we used to be. There is no bouncing back. There is only moving through,” Greitens said. “Resilient people do not bounce back from hard experiences. They find healthy ways to integrate them into their lives. In time, people can confront great calamity with great spirit and can create great strength.”

“I’m a fan of his work,” Wolfe said. “I’ve read his past book The Heart and The Fist and I’ve acquired his other book, which is pretty similar.”

I don’t have any connections to the military. No family members, no personal experience. But I think the ideas he shared here tonight are relevant to me, too. – Third-year global studies major Codie Franklin

Wolfe said he was considering joining the military before he sustained a personal injury, but still enjoys learning about Greitens’ military career.

“I’ve read the book already and some of the things he did say were verbatim,” Wolfe said. “But he did hit a lot of the more important topics harder on the head as he felt necessary and it was nice to hear it in his voice for the first time. That was awesome. I have respect for humanity and life in general and the way he approaches and sees it is really fascinating. Really, it’s respectable.”

First-year mechanical engineering major Herman Li said he attended Greitens’ lecture because of his prior training experience with the United States Marine Corps. According to Li, the lecture was more successful and influenced him more than previous, similar events he has attended.

“I just thought his advice on getting through pain and suffering was really good … to build resilience,” Li said. “I wasn’t expecting this many people because I went to an event a few weeks ago where a marine was speaking and there was only like ten people.”

First-year physics major Patrick Mossman said he attended the lecture to learn more about the military.

“I’m interested in joining Army ROTC [Reserve Officers’ Training Corps] here and I just decided to come because I thought it would be interesting hearing from someone, especially a Navy SEAL,” Mossman said. “He had a lot of interesting things to say. I definitely learned some things.”

“I don’t have any connections to the military. No family members, no personal experience,” Franklin said. “But I think the ideas he shared here tonight are relevant to me, too. I liked his ideas of growing from what we have experienced. He said something like, ‘What happens to us becomes a part of us’ and that really resonated with me.”

According to Franklin, Greiten’s idea of “segmenting,” or breaking work assignments into smaller, more manageable tasks, was helpful.

“That’s helpful in everyday life,” Franklin said. “As students, and a lot of us with jobs, we have busy lives that can seem overwhelming. So I’ll be using this segmenting advice in my life.”