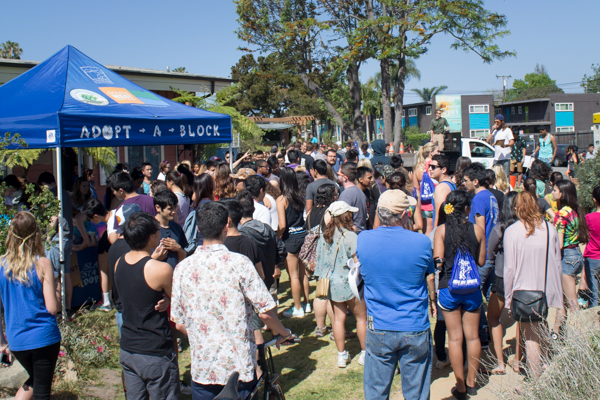 Students and community members wait to get their buckets and grapplers Sunday morning to clean up the streets of Isla Vista. Paris Cullen/Daily Nexus

The cleanup was coordinated by the Isla Vista Recreation and Park District, and is the largest annual event Adopt-A-Block holds. Many participants were students from various environmental groups, community service organizations and Greek life.

Adopt-A-Block supervisor Adam Porté said I.V. relies solely on volunteers for clean-up and that without volunteer help, litter would otherwise be left on the streets.

“Most of the time everywhere else in the world … you’re going to have a private contractor that would come out and clean up all the trash afterwards,” Porté said. “We don’t have that here, so the amount of trash that is generated and is left on the streets from events like this is just essential to have all these volunteers because if we didn’t that stuff would just sit there forever.”

According to Porté, clean-up events are important because I.V. does not have street sweeping days, and street sweepers are unable to remove trash because of the large number of parked cars.

“In Isla Vista we technically don’t have street sweeping days,” Porté said. “All the cars on one side of the street never have to be moved, so a street sweeper can’t get in. So any of the trash you see on the ground never gets picked up except when our volunteers pick it up.”

Computer engineering major and Lieutenant Governor of Circle K International Club Andrew Pagan said he helped organize and keep track of the logistics of the cleanup.

“Today we are helping out with registration because we need people to sign waivers and come back to register the number of hours they picked up trash, number of buckets of trash, and blocks they covered,” said Pagan. “Having 300 people in one day in two hours cleans a lot of blocks”

First-year economics and accounting major Dejanae Allen said collecting trash is important for the safety of Isla Vistans, especially with the large amount of glass littering the streets.

“There was a lot of glass, so we were trying to pick that up because I know some people walk around barefoot so we got to make sure we get that picked up,” Allen said.

Second-year environmental studies and economics double major Jose Valdez said athough Deltopia this year did not generate as much trash as last year, it is important to clean up litter accumulated to protect the environment.

“Deltopia was a lot more controlled this year with the huge effort to keep out-of-towners out of here, so people were more controlled so it’s a lot less trash, people were more respectful especially since most of them lived here,” Valdez said. “It’s important to clean the trash up because that trash you see on the sidewalk will end up in the sewers, and that sewer will end up in the water and that’s going to effect the environment.”

Fifth-year environmental studies major Anbareen Shefa said trash on streets in I.V. could easily end up in the ocean.

“We’re so close to the ocean when you have heavy winds, the winds just going to blow all the trash into the ocean, so I’m trying to divert that as much as I can,” Shefa said. “There are lots of cigarette butts, which is mostly what I’m after. People smash them into the plants and stuff, it’s sad.”

Porté said he was content with the number of people that showed up to participate in the cleanup and was glad to take part in the event to improve the I.V. environment.

“It’s so much fun to come in and see all these people come together to want to clean up their community,” Porté said. “It’s just so rewarding. And I know that I’m helping out the community and know I’m improving the quality of life for 23,000 people. I’m huge on environmentalism, because that ocean out there it can’t protect itself, so we got to do something about it.”