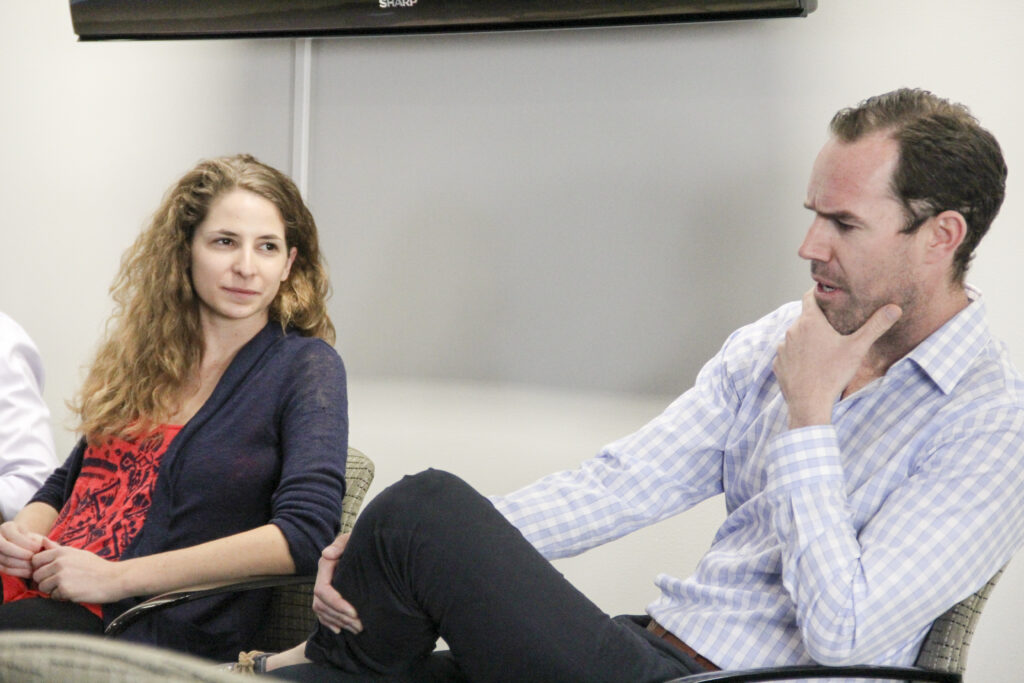 “That Ari Gold character is tame compared to [agents in] the CAA,” said Justin Winters, a screenwriter who has been around the block when it comes to talent agencies. Winters delivered this one-liner during UCSB’s sixth annual Talent Trade, which took place March 7-8. The two-day conference featured talent industry professionals who discussed where they have been and how they got there. From learning how to brand oneself to finding the right agency, a wealth of knowledge filtered through a room on the fourth floor of the SSMS building.

Like Winters, most of the panelists were former Gauchos. According to Talent Trade’s organizer Danielle Hakimi, alumni were the contacts who confirmed the quickest interest.

Hakimi directs the purposely lower-cased “mab productions,” an organization which produces events and shows with the hopes of bridging UCSB’s film and theater departments. A third-year theater major, Hakimi is optimistic about mab’s role as a liaison.

“[The theater department] has actors, designers, directors, people interested in writing and producing. People in the film department make films, look for actors, look for all these people who are five minutes away from them,” Hakimi said.

Mab productions inherited the Talent Trade conference this year and made it a primary goal to meld together people from both departments. The final group was small — around 25 members — but the smallness allowed students to deeply connect with panelists. Casual networking occurred throughout the weekend, creating what Hakimi calls “a genuine connection.”

While each session brought its own share of guidance, the agents’ workshop offered tons of practical advice. Here’s a choice selection of tips given by former-gauchos-turned-agents Sarah Agronow, Jackson Gibbon and Winters.

Since it was an agents’ panel, advice on how to become Ari Gold from “Entourage” was included in the discussion. The main thing to know is that it is a holistically strenuous job. Winters reported that a lead agent at Innovative smashed cell phones with a hammer, while Gibbon ensured that angry spats are “99 percent about them, not about you.”

The alphabet soup of top agencies to work for was poured out: CAA, UTA and WME. Creative Artists Agency (CAA) is the most prestigious of them all and has weird agent rules like no cell phone use when you’re a freshman. (Hence hammer-smashing). United Talent Agency (UTA) specializes in hot, new talent so they are a solid base for newbie actors. William Morris Endeavor (WME) is the largest agency in the world and supports giants like Joseph Gordon-Levitt, Russell Crowe and Denzel Washington.

Despite the large amount of celebrity name-dropping that occurred throughout Talent Trade, the conference was largely a casual experience. Panelists talked to attendees without PowerPoint or rehearsed dialogue. Attendees left dry-cleaned slacks at home and wore faded jeans and hooded sweatshirts. Sandwich lunches complete with juice and granola bars were shared amongst everyone. The air of informality was crisp and non-threatening.

And yet, the informality made the conference all the better. Things didn’t get overcomplicated with resumes or dress code, and the casual attitude everyone held brought genuine connections throughout the weekend. The workshops were a bit ragtag at times, but all in all everyone walked out armed with ideas on how to join the Talent Industry after college.

In addition to Talent Trade, the Film and Media Dept. has a large repertoire of events such as Word Farm, Reel Loud, Cam Con and the Digital Film Festival. For more information on future events, visit filmandmedia.ucsb.edu/news/news.html.