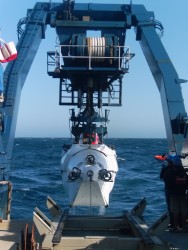 Hundreds to thousands of meters below sea level there exist unique single-celled microorganisms from the domain Archaea. Many Archaea are biology’s adrenaline junkies flourishing in Earth’s extreme environments — from hot springs to the deepest levels of the sea — consuming methane, sulfur or metal rather than oxygen for sustenance.

As if the extremist lifestyle of Archaea was not intriguing enough, UC Santa Barbara researchers recently discovered a strange new virus off the coast of Santa Monica, California that infects methane-eating Archaea by genetic self-mutation. The scientists were surprised to find that not only does this virus deliberately select and mutate one of its own genes, but some Archaea also exhibit similar behavior. This study can be found in the latest publication of the journal, Nature Communications.

In order to collect and observe the DNA sequences, David Valentine, professor in UCSB’s Department of Earth Science, and his fellow researchers used the submarine Alvin to sample marine sediments from a methane seep found offshore of Los Angeles. Methane gas was fed into these samples to induce proliferation in the Archaea. After purifying the viruses from the sediment samples, they extracted and sequenced the DNA to develop a metagenomic library. Additionally, the researchers were able to find a partial genetic match from Norwegian and Californian methane seeps, implying that this virus exists all over earth’s deep ocean methane seeps.

“From this library, we were able to reconstruct one nearly complete viral genome wherein we found patterns of guided mutation,” Blair Paul, lead author of the paper and a postdoctoral scholar in Valentine’s lab, said. “We then used a number of bioinformatic tools to compare the genome of this virus with public DNA databases that contain sequences from globally distributed environments.

“We think this sequence similarity is required for the targeted site to be replaced during genome replication,” Paul said. “In this process, an enzyme called reverse transcriptase randomly mutates the adenines in this region to any of the other nucleotides in the DNA sequence.” 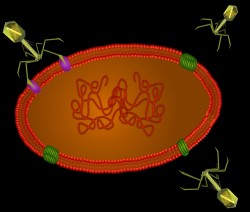 A virus targets Archaea by using hypermutated tips of its tail fiber appendages. This self-mutating mechanism confers a powerful selective advantage to the virus, significantly increasing its host range.

The results of the study revealed that a new virus with a special genetic code likely targeted methane-eating Archaea as its host. Further experimentation led the researchers to discover a retroelement that accelerates the mutation of the viral genome, suggesting that microorganisms in deep-sea environments use the same or similar mechanism for genetic adaptation.

“We were able to determine that one gene in the marine virus and a subset of genes in Nanoarchaea appear to be selectively mutated towards survival in their respective subsurface environments,” Paul said. “This mechanism allows microbes to explore an enormous range of variants for targeted genes and, in turn, the proteins they encode.”

In contrast to the virus, which uses guided mutation to alter only a single gene, Nanoarchaea were observed to mutate a minimum of four separate genes, which shows a profound effect, Sarah Bagby, a postdoctoral scholar in the Valentine lab, said.

“If they’re all firing at once, suddenly the number of combinations of protein variants in play is really massive,” Bagby said.

The genetic self-mutation employed by both the marine virus and the Archaea sheds light on the survival of microorganisms within the Earth. Valentine hopes that future experimentation can expand scientists’ knowledge about the environment in which these microorganisms live.