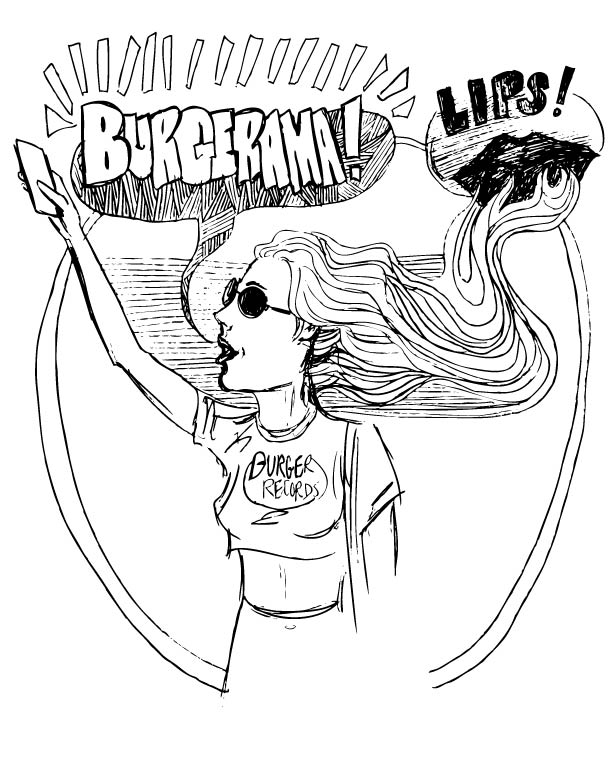 A swarm of guys, girls and everything in between amassed in their funkiest thrift shop getups at the Observatory last weekend in Costa Mesa, California. The usually cozy venue was transformed into a three-stage rock festival, complete with an outdoor stage, vendor tents and port-a-potties in the parking lot. The norm was colored hair and the fashion sense of Sid Vicious if he’d lived in Southern California and had an affinity for LSD. Some string lights thrown around the trees and block letters on the roof spelling BURGERAMA officialized the two-day festival, which is put on by the Burger Record label.

All-ages events can typically go one of two ways: a lot of little kids, or a cohesive mixture of young and old. Burgerama was of the latter sort, drawing in an eclectic crowd consisting of middle- and high-schoolers, college students, young parents with small kids and even a small middle-aged fanbase. Many band members could be spotted anonymously roaming around after their sets. Despite the wide age range and harshly edgy styles, the vibe was unanimously friendly and laid back. To say the least, it was pretty weird — in a good way. It was the kind of weird that ensures you can look and act in any way you like without fear of being judged.

Despite donning nothing but a leather thong and face paint, King Khan and the BBQ Show singer, BBQ, was sure to also cater his set to the younger kids in the crowd. A song about a bird that gets addicted to some “white powder” inside a bird feeder segued into a short anti-drug rant. The rock duo encouraged fans to tell drug pushers to “shove it back up your ass.” This was met with heart-warming cheers and applause from the audience.

The 21+ crew (or anyone with the means to obtain a colored wristband) enjoyed access to two beer gardens located on either side of the main stage where they could see headliners like Weezer and Ty Segall from close side location. Other commodities included tacos, burgers, ice cream and T-Shirt stands — one of which featured Blake Anderson of Workaholics for meet and greets.

The indoor stages were more dance-friendly albeit cramped, thanks to the psychedelic sounds of Mr. Elevator and the Brain Hotel, and the spacey Craft Spells. Shannon and the Clams also transformed the room into a vintage dancehall with their retro doo-wop sound.

The event lasted from noon to midnight each day. As the sweltering heat of the afternoon gave in to skin-chilling evenings, the crowds outside grew larger for the more anticipated performances of headliners. Although not necessarily a headliner, pop-punk group Cherry Glazerr was one of the most buzzed about acts. Perhaps it was because two of the three members are teenage girls (seniors in high school), who are already living the dream of being legitimate rockstars and touring their way to fame and notoriety. But even more hype-worthy was the setlist, with each song acting as two-minute bursts of rapid-paced angst and energy. Their set paid homage to the highs and lows of teenage girlhood with songs like “Grilled Cheese” and “White’s Not My Color This Evening,” a song about menstrual pains.

The outdoor stage was packed tight as fans excitedly awaited the Black Lips. Fifteen minutes after their designated set time, riotous cheers finally welcomed them to the stage. Within seconds of their first song, the entire audience evolved into a passionate, adrenaline-charged mosh pit. Drunken bodies vehemently flung around while others crouched away hoping to avoid this fearsome fate, but to no avail. This reporter’s hair momentarily caught on fire during her rigorous escape; it was pretty gnarly, but also fun, if you’re into that sort of thing. From the eventual outskirts of the mob, the band was just as enjoyable with songs like “Bad Kids” and “Family Tree.”

It’s no secret that audiences love to hear bands shout out their hometown for some strange, intrinsic reason. Zac Carper, the lead singer of FIDLAR, incorporated nostalgia to the area by proclaiming “I lost my virginity in Orange County, to some Catholic school Mater Dei girl in a Jack-in-the-Box parking lot.” This was the perfect introduction to their song “Awkward,” which spread a head-banging tone into the crowd. Later on, “Cheap Beer” became a huge hit amongst those listening from the beer gardens. It was an appropriate moment.

All things considered, there was perhaps no greater unifying moment of the festival than that of Weezer’s set. Everyone in the western United States instinctively knows every word of modern-day classics “Beverly Hills” and “The Sweater Song,” two songs which are the most fun lyrics to shout in a drunken sea of fans. After playing “Say It Ain’t So,” singer Rivers Cuomo introduced his father onstage. It was an endearing moment placed after a song that directs a certain amount of rage, presumably towards said father.

On these two sweaty days and goosebump nights on the grungier side of Orange County, right on the brink of festival season, Burgerama played out to be an all over success. Sure, there were moments of technical difficulties and unruly crowds met with uptight security. But these were few and far in between, and they were more than outbalanced by moments of cohesive endearment and serendipitous joy. In the end, you were still left with that goofy post-festival grin days afterward, repeatedly reminiscing on the weekend’s best moments.