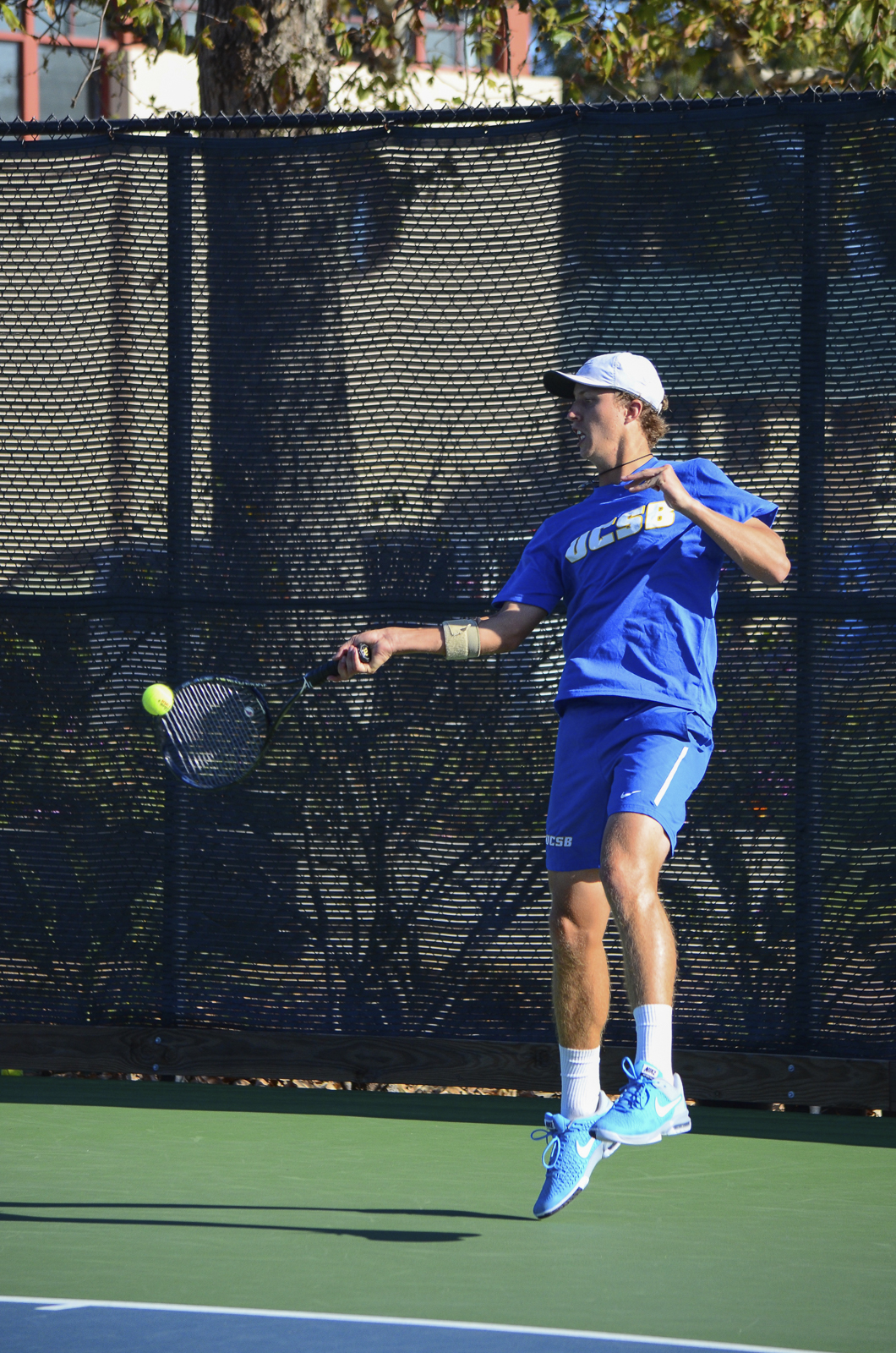 The UCSB men’s tennis team defended its undefeated home record this week with two victories in Santa Barbara. On Thursday, Santa Barbara took down Florida Gulf Coast University 4-3 and then added another win on Sunday over Gonzaga University 6-1.

With these two wins, the Gauchos improve to an overall record of 5-6 and a perfect 5-0 at home. The Eagles of FGCU drop to 6-5 and the Gonzaga Bulldogs fall to 5-3.

“Overall, I just think we’re getting better,” Head Coach Marty Davis explained. “It’s sweet to be home and now we just have to continue this success on the road.”

Thursday’s match with the Eagles turned out to be a true test of UCSB’s abilities as the close match came down to the wire. The Gauchos gave themselves a 1-0 lead by winning the doubles point to start off the match. The doubles duo of sophomore Erik Johnsson and junior Nathan Eshmade tied the doubles matches at 1-1. With the point on the line, the team of sophomore Morgan Mays and junior Andrew Riminton added a 6-4 victory to put the Gauchos up in the match.

UCSB began to fall behind, dropping three of the first four completed singles matches as only freshman sensation Cody Rakela was able to capture a victory to protect his unbeaten record when playing at home. The Eagles were given a 3-2 advantage with just two matches left to play. UCSB’s match fell on the shoulders of Eshmade and senior Tobias Galskov with the team needing both players to win.

“I knew we were down 2-3 and that the match was going to come down to me and Nate,” Galskov explained. “I knew they needed a win from me, so I stayed focused and just played it point by point.”

Galskov finished off his senior opponent, No. 107 Jordi Vives, in straight sets 7-6, 6-2 to tie the overall match at 3-3 and leave the deciding point in the hands of Eshmade on court three.

The junior battled in the first set and just edged out his opponent 7-6. With the match on the line, he captured the victory on a nonreturnable volley and dropped to the court where his teammates surrounded him in excitement. The Gauchos walked away with a tight win of 4-3.

The match on Sunday with Gonzaga was a one sided affair for the Gauchos. Despite dropping the doubles point to start, the team was able to get the job done on the singles end, sweeping all six matches.

“Playing in this atmosphere with all these fans and on the courts you practice on will always give you that extra advantage,” Rakela said. “Even when matches start to get close, you have your fans, teammates and coaches, and that comfort that allows you to edge out your opponents.”

Rakela has shown just what playing at home does for him in his very first season as a Gaucho. Since his arrival in the fall, he has not lost a single match at home and kept that streak alive on Sunday with Gonzaga. His straight set victory of 6-4, 6-2 sealed the victory for UCSB, giving them a 4-1 advantage at that point. This freshman phenom has continued to push his team and has contributed scoring to all five victories at home.

“I heard that there was three wins so I knew I was the clincher,” Rakela explained. “I really tried to hit a big serve and get pumped up on that match point. It was just great to get the W today and it was a quality win over a good team.”

After being the last one to complete his match on Thursday, Eshmade was the first Gaucho done against Gonzaga. His performance against FGCU was enough to move him up to court two for the first time this season and made the most of the opportunity. He dominated in straight sets to win 6-1, 6-2.

The Gauchos will have a couple weeks off and then they will look for their first road win on a long trip at the end of March. They will face three teams in four days to cap off non-conference play.