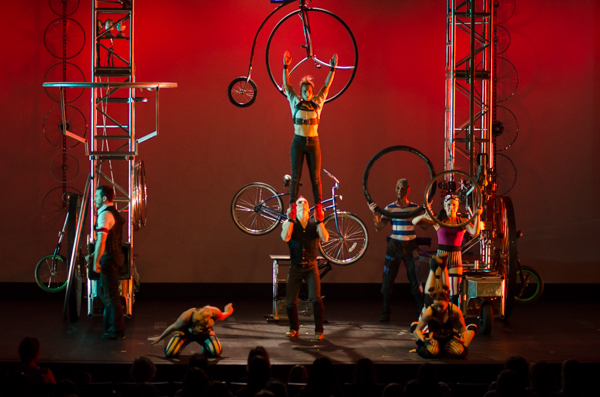 “We were doing this thing that meshes nicely with steampunk” Lashua, who is also the show’s Creative Director, said. “We thought about how we could affect the circus, using devices, we wanted to show off the wrench and the manpower behind the machine.”

Lashua began his career as a BMX biker, starting off in his hometown of Boston. After landing a sponsor in Mongoose, Chris began to tour the world with his company Mountain Dew Freestyle Performance Team, getting attention from Cirque du Soleil.

Eventually Chris founded Cirque Mechanics, putting together his background as a stage technician for Cirque du Soleil, a BMX rider and circus performer. With their show, Cirque Mechanics performers make a unique change to the circus landscape, combining BMX biking with steampunk culture.

“We build these Rube Goldberg devices, that are fun to watch” Lashua said. “The German Wheel rolls around with a built on roller on the bottom, which is connected for mobility”

When thinking about the details for their new show, it was only logical that these mechanical contraptions would fit nicely in the pre-industrial revolution, the theory of steampunk.

Rather than seeking to make a show that combined steampunk culture with circus acts, Cirque Mechanics simply realized that the genre fit perfectly with the show they were constructing.  One of the facets of the show is its ability to bring in a crowd of people with various interests, whether it be the mechanical aspect, the steampunk elements or the circus act itself.

“Cirque Mechanics is a mechanical circus first and foremost” Lashua said. “Executing and building things, principles of lifts and force, principles of physics, shows the range [of the show] for the audience”

The work is never over for Lashua and his company of performers, who are constantly tweaking their show in order to keep their reputation as a strong performance company.

“We only remain relevant if [the performers] continue to grow, and stay fresh” Lashua said. “I’ll give a note on a thing, and that’s why the show remains relevant.”

The performance will take place Sunday at 3 p.m. and 7 p.m. at Campbell Hall. Tickets for UCSB students are $15 and $25 for the general public.