The Daily Nexus
Sports
UCSB Travels North to Play Three-Game Series at Sac State
March 5, 2015 at 5:07 am by Sarah Stigers 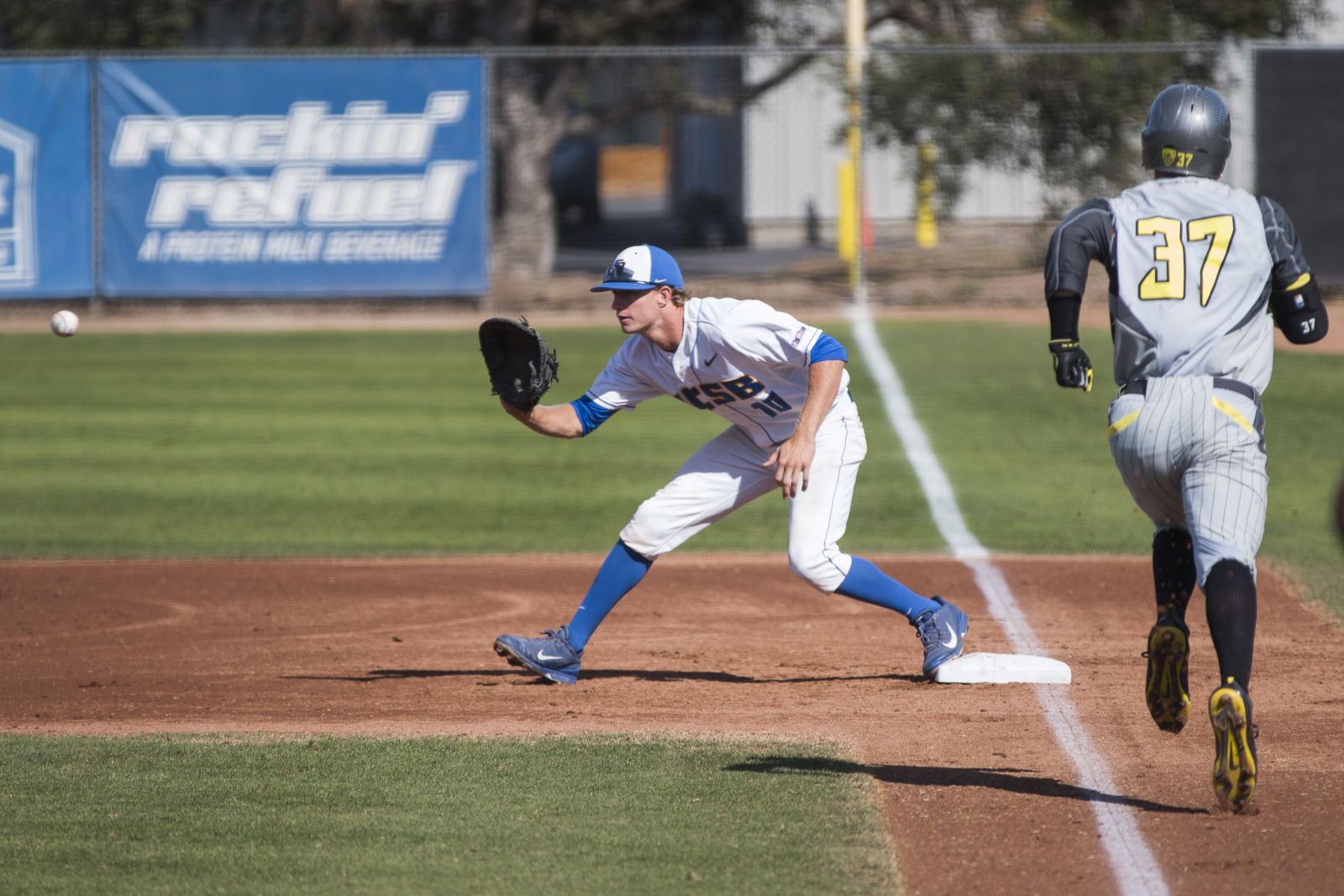 Dalton Kelly makes an out at first base. Stephen Manga/Daily Nexus

UCSB baseball prepares for a trip north this weekend for its first three-game away series against Sacramento State.

After upsetting USC — a team previously undefeated — with a walk-off win on Tuesday, UCSB enters this weekend 9-3 and on a current two-game win streak. Sacramento will be entering this weekend coming off three straight losses with a 6-4 overall record.

After a fourth loss from previous Big West leader, CSUN, UCSB now takes the top spot in the conference with a .750 win percentage.

“It’s a long ride up to Sac State, but we’re excited,” infielder and designated hitter Robby Nesovic said. “For the first time, it’s always an experience for the freshmen and hopefully we’ll come back with a few ‘W’s.”

Possible starters for this weekend continue to be juniors Dillon Tate, Justin Jacome and sophomore Shane Bieber. Tate and Bieber have both thrown for 21 innings and Jacome through 18.2. Tate still holds the lowest earned run average among the UCSB starters with a cumulative 1.29 E.R.A. Tate is also tied for third in the conference in total strikeouts with 25.

“We’re focusing on every day as a new day,” Nesovic said. “We’re not going to worry about the weekend until it’s here.”

Senior outfielder Luke Swenson follows right behind, batting .400 and has recorded one triple and two doubles in his 14 total hits. Swenson has only struck out four times this season.

“We need to execute, throw strikes under pressure and in tough situations,” Head Coach Andrew Checketts said. “We need to be able to execute small ball.”

Lead-off hitter, RS sophomore outfielder Andrew Calica leads the team in on-base percentage with a .554 average. He is also leading the team in drawing walks off opposing pitchers with 10 bases on balls.

“We’re still working offensively I think, I’m feeling confident defensively, but offensively we’ve still got some work to do,” Checketts said. “We’re practicing today and tomorrow and there are a lot of things we need to work on like tightening our swings.”

On the mound for Sacramento is senior right-handed pitcher Brennan Leitao who has 19 innings pitched under his belt this season and currently holds a 1.89 E.R.A. Sophomore left Sam Long has pitched for 11.2 total innings for a 1.54 E.R.A.

“There are a lot of challenges when you go on the road, and a lot of new stuff to get comfortable with your environment and playing on a new field,” Checketts said. “Fortunately, we’ve got a lot of older guys who are more experienced and have been through it before.”

The series against Sacramento will start tomorrow at 2 p.m. at John Smith field in Sacramento.

A version of this article appeared on page 12 of March 5, 2015’s print edition of the Daily Nexus.