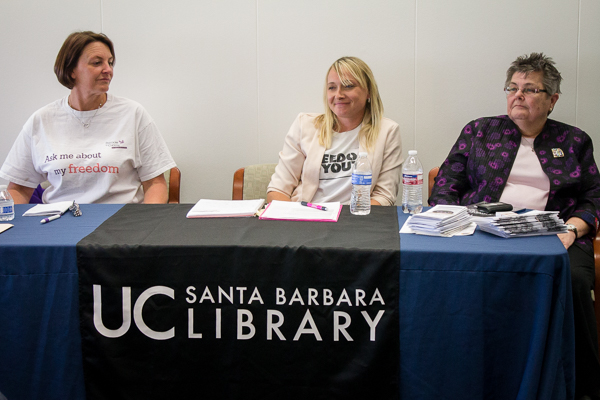 Davidson Library hosted a panel discussion on prisoner re-entry into society on Wednesday as part of the UCSB Reads 2015 program, bringing together university affiliates and Santa Barbara residents to discuss Piper Kerman’s best-selling memoir Orange is the New Black: My Year in a Women’s Prison.

The three panelists, Sister Terry Dodge from Crossroads Inc., Billi Jo Starr from Freedom4Youth and Kristianne Clifford from the Freedom to Choose Foundation, explained the importance of helping prisoners, particularly women and children, re-enter civilian life after release from prison. The panelists shared stories from their years working for non-profits, emphasizing the methods their organizations use to help prisoners through the re-entry process.

Dodge founded Crossroads Inc., a non-profit organization providing support to incarcerated women, and said female prisoners should not be defined by crimes they commit.

“We are more than our worse mistake,” Dodge said. “There’s much more to us. People need the opportunity to make change within their life and I think as a community we need to be willing to accept them, [and] allow that change to happen to welcome them back into the community.”

“The bottom line is hurt people, hurt people,” Starr said. “There hasn’t been one boy or girl that’s come in and said ‘Life is so great, I’ve had it easy and I just decided I was going to steal a car one day.’ It’s always something traumatic in the youths’ lives and that trauma has impacted them in a variety of ways … that has fractured their soul. It’s really about taking that fracture and helping and empowering them to repair it on their own.”

Starr said the most important thing Freedom4Youth does is work with troubled youth through direct consultation without judgment or expectation.

“We just see them for who they are and we see the best in them and we listen to them,” Starr said. “Overall that’s one of the greatest gifts that you could give to someone, because by listening to them, then they’ll come to their own conclusions. They’ll realize their own dreams. And we just provide that vehicle for them and support them.”

Clifford works with Freedom to Choose Foundation, a non-profit organization offering education workshops to California inmates on personal responsibility, and said she hopes her adolescent stint in prison will help her reach out to people in similar situations.

“It’s about instilling hope and meeting people where they are at,” Clifford said. “I was in prison when my father died, when I was twelve … I’m grateful for my experience because I have a purpose in life and hopefully I can educate people and make myself vulnerable to others to ask me questions.”

Clifford said the Freedom to Choose Foundation changed her life by helping her deal with personal issues involving self-judgment.

Starr said she also relates to the “at risk” youth she works with in the juvenile justice system.

“I was that at-risk youth … we grew up in a trailer park … my mom was a teenage mom. I never thought of college or a future, and so I have an understanding of where the youth that I work with come from,” Starr said.

According to Starr, strong supportive mentors in her life helped her realize her worth amidst adversity.

“[They] helped me realize, ‘Hey I have a choice. I don’t have to go down the same road that my parents went down and I can make different choices and I’m worth it,’” Starr said.

“People think the work that I do is extraordinary. I don’t,” Dodge said. “It seems extraordinary to people because there’s not enough people doing it.”

Assistant University Librarian for Outreach and Academic Collaboration Rebecca Metzger said events like the prisoner re-entry panel are vital to present to students because it brings new perspectives on life outside university.

“Sometimes at a university it can be kind of a closed environment where you don’t hear a lot about the experiences of the people outside the walls of the university,” Metzger said. “So with this program we were trying to bring those voices in and create a space to have conversations.”

First-year undeclared major Rachel Dahan said she found the panel discussion to be “empowering” because of its wide relatability.

“It is relatable for everyone,” Dahan. “We can’t just say ‘They are other people’ or that ‘It doesn’t matter because it’s not my fault they should be punished’ because they are people and this is a very important issue.”