The Daily Nexus
Fine Arts
The Taboo Reimagined: Eric Beltz and The Cave of Treasures
March 5, 2015 at 11:41 am by Jason Chun 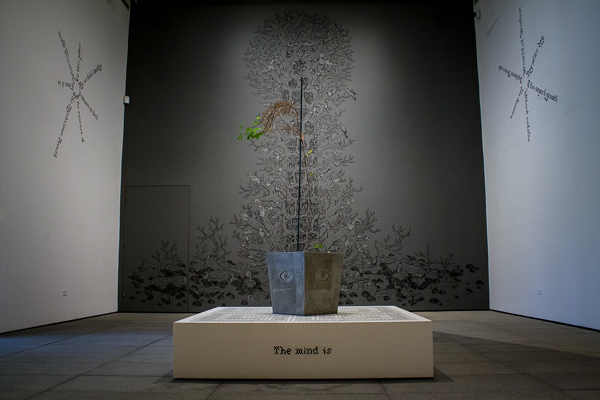 It was hard to miss the poison oak plant sitting in the middle of The Cave of Treasures, but some of the other elements associated with danger in the installation were subtler. The Cave of Treasures, a work of UCSB alumnus and Artist-in-Residence Eric Beltz, takes up an entire room in the campus Art, Design & Architecture Museum. Beltz, along with Professor Emerita of Art History Ann Bermingham, hosted a walkthrough at the AD&A Museum where the artist discussed his installation.

An audience of some two dozen gathered in the Cave of Treasures, some walking up to the ornate text and illustrations on the walls, others observing (from a distance) the live poison oak. Most eyes were on Beltz as he answered questions from Bermingham. Beltz stood with one hand in his jeans pocket while the other pointed and gestured animatedly at the various elements of his piece (or as he called them, “magical, sparkly things”).

The installation’s immediate attention grabber was the simply titled Poison Oak Vessel. Emerging from a 150-pound concrete planter, the western poison oak plant drooped despite being tied to a stake, but maintained healthy leaves at the tips of its branches. The planter stood on a wide square pedestal decorated with a cross-stitched swastika pattern. Beltz explained that though the swastika has become overwhelmingly associated with Nazism, it was initially a positive symbol seen in many cultures. The poison oak and the swastika design on the pedestal are essential components in Beltz’s workings with the taboo.

As Beltz explained, “Looking at things that are taboo … you want to know why … [they] get pushed  to the side … which means that for artists, there’s room to grow.” The artist later added, “It’s fun to make people a little uncomfortable,” comparing the poison oak and swastika to the prominent profanity in his early works. 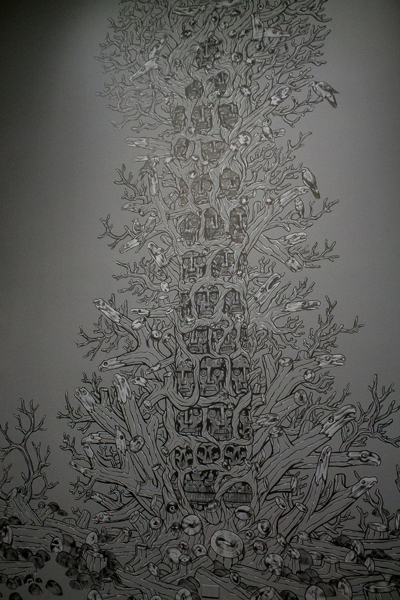 A third key element in The Cave of Treasures was the mythological figure of Medusa. Though often evoking the image of a snake-haired monster, Medusa was reimagined in Beltz’s The Mortal Gorgon Medusa, a silver ink and shellac drawing on a massive sheet of black paper. In this work, Medusa was represented by depictions of plants like mint, poison hemlock and poison oak, all found throughout campus. Clearly, Beltz had done his research; he described the plants in great detail, telling of their uses and why he picked them to symbolize a Medusa tied to nature. Beltz also elaborated on the text beneath the plants in the painting: “To see is also to touch.” He explained that this phrase came from a book’s description of a Hindu concept of mutual sight.

The largest work in the installation occupied the entirety of a 17 ft. wall. Medusa’s Scarecrow was painted directly on the wall over the course of about one week and made up Beltz’s largest work to date. It depicts a totem pole-like design overgrown with carved and cut logs, branches and tree stumps — a symbol of Medusa’s power to petrify those who met her gaze.

Asked about his biggest challenge in creating The Cave of Treasures, Beltz related that he broke his toe while working on a ladder to paint Medusa’s Scarecrow. Otherwise, he said, the painting process was “surprisingly easy.”

Accompanying Medusa’s Scarecrow were lines of text radiating from a center point, rendered in a gothic font on the walls adjacent to the main painting. Each line was a phrase that connected with the next, but without an obvious starting point.

Second-year English major Xoe Bien, writing about the walkthrough as extra credit for an art class, spoke of The Cave of Treasures with great enthusiasm. “When I first got here, I was telling my friends, it’s circles and words, my favorite!” she said of the wall text. “There’s something appealing about the ‘shadows of shapes,’” Bien said, borrowing Beltz’s own description.

After the walkthrough, Bermingham talked about her earliest experience with Beltz, dating back over a decade. “I’ve known Eric since he was a graduate student here [at UCSB],”Bermingham said. “I met him because he was interested in my book, Learning to Draw.”

Carlos O. Amezcua, a third-year ecology and evolution major who works as a guard and receptionist at the AD&A Museum, helped set up the installation. “[Beltz is] a really nice guy,” Amezcua said before going on to talk about Beltz’s fascination with poison oak. Amezcua described his conversation with the artist before the walkthrough, saying, “I actually got some poison oak on the back of my thigh; he was really excited about that.”

Beltz’s ambitious project will remain on display at the AD&A Museum until May 1, 2015. For more information, visit museum.ucsb.edu/news/feature/306.