The Daily Nexus
Tennis
UCSB Welcomes Florida Gulf Coast and Gonzaga to Town
March 5, 2015 at 5:05 am by Daniel Moebus-Bowles 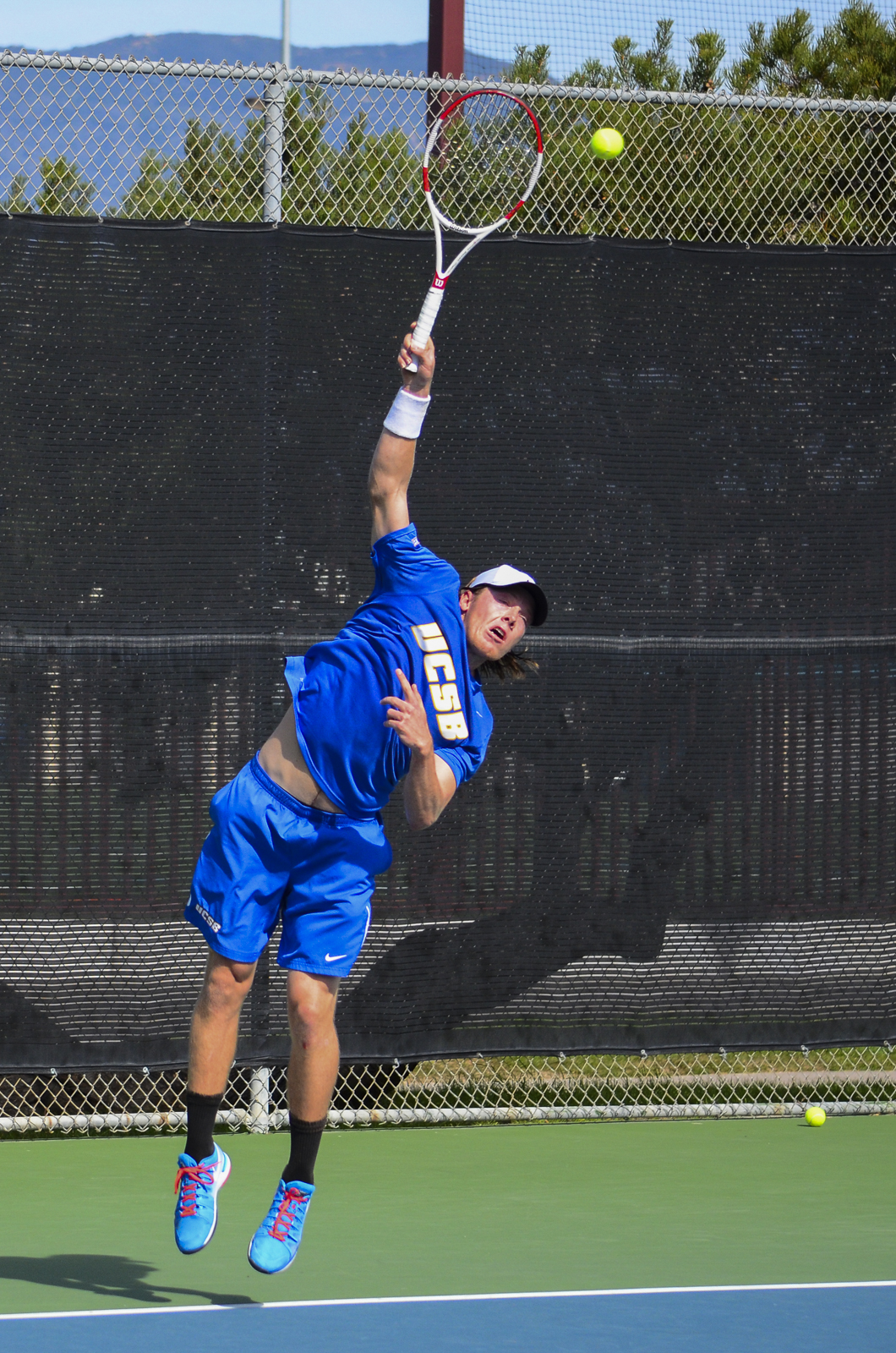 Morgan Mays hits the ball across the net toward his opponent. Christina DeMarzo/Daily Nexus

After the rain canceled the UCSB men’s tennis team’s match on Monday against Oregon, the Gauchos will look to face Florida Gulf Coast University this afternoon and Gonzaga University on Sunday.

The Gauchos come into this week’s events with an overall record of 3-6, while the Eagles stand at 6-4 and the Bulldogs 5-2.

The Eagles of FGCU come into today’s match on a two-match skid after being defeated by Cal Poly SLO on Tuesday 4-3. Overall on the road this season, the team is 4-3 having played seven of its 10 total matches on the road. Needless to say, this team is familiar with playing outside of its home stadium in Fort Meyers, Florida.

Expecting to add another victory to his long career as an Eagle is senior Tianyu Bao. In the team’s match with Cal Poly, Bao picked up his 100th career win in college tennis. The senior fought hard on the number five court and ended up taking the match in three sets 7-6, 4-6, 6-4.

The Gonzaga Bulldogs are currently riding a four-match win streak after taking two straight victories on the road and then two more at home. During this stretch of wins, the Bulldogs have only lost a total of four sets and swept Creighton along the road. On the road, this team holds a record of 2-1 and its only loss came to a tough opponent in No. 41 Drake.

Playing on the number one court for his Bulldogs team will be none other than senior Nick Kamisar. In his most recent match with Lewis-Clark State, the senior took a victory in sweeping style with scores of 6-0, 6-0. He will likely face off with UCSB’s senior Tobias Galskov or sophomore Morgan Mays.

The Gauchos have had a long break since their last match two weeks ago, but when playing at home they have been perfect. They hold a home record of 3-0 and have allowed their opponents just five sets in all three matches.

These matches will be an opportunity to defend their unbeaten home record and add on a couple of wins before heading on a three-match road trip later this month to cap off non-conference play.

“We have a couple of good-looking teams coming in this weekend,” Davis said. “But with the way that we’ve played at home this season, we have confidence.”
Today’s match is set to start at 1:30 p.m. and Sunday’s match at 1 p.m.