The Daily Nexus
Music
Live at the Batcave: The Crash Landings
March 5, 2015 at 1:35 pm by Alex Bocknek 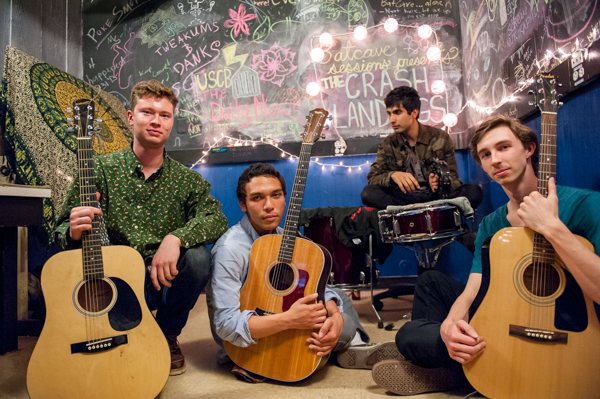 Meet The Crash Landings. This local Isla Vista punk collaborative exists for one purpose — to fight the infestation of ska and reggae with high-pitched shrieks, disorganized anger, mosh pits, songs about rioting, ear-piercing guitar riffs and the occasional, dreamy and Weezer-esque love ballad. Last week, these crusaders of the loud and obscene came to record a live session at the Daily Nexus Batcave and they were kind enough to slow down and chat about their music, vision and general moral depravity.

The Crash Landings are comprised of Nate Gangloff on drums, Gaurav Bhandari on rhythm guitar and supporting vocals, Michael De Maria on lead vocals and guitar and Matt Caracciolo on lead vocals and bass. At first glance, this ragtag bunch looks like they were assembled by an eHarmony for musicians whose only criterion for selection was a California origin … scratch that, Bhandari is from Nepal. Okay, so they have nothing in common. But they have taken this surmountable list of differences and developed their trademarked sounds of dissonance around it.

In no case does this hold more true than with frontmen and songwriters, De Maria and Caracciolo. De Maria writes all songs about debaucherous alcohol binges and general party-related destruction and has made the band famous locally for his stage antics. He frequently dives off of drum sets, breaks guitar strings and collides with unsuspecting audience members.

Caracciolo is the yang of the duo. He sings about past loves and missed chances and has an almost nostalgic look in his eyes when he lips the mic. His songs serve as a well-deserved break from the chaos of De Maria’s pieces. He also functions as resident stand-up comedian, often bantering with the crowd between songs. So, without further ado, here’s what this beautifully disorganized garage-y collaborative has to say about their band, their mission, their music, things they like and other things they don’t care about.

Matt Caracciolo: Well, we all have our own roles. Mike has the most songs. Gaurav is the tallest. From a life standpoint, different people are spotlighted.

Michael De Maria: I don’t think about anything hierarchically. I don’t think writing music is an indicator of worth. It’s stupid to do a group as a hierarchy … I will command attention [during performances] if I feel it’s necessary, though.

AB: What do you guys have that other Isla Vista bands don’t?

Gaurav Bhandari: They have Gaurav.

AB: So would you say there’s an aspect to your music that is more than just about the music itself?

MD: I don’t plan to do anything. My body just does what it does.

MC: The stage antics aren’t planned. I like to approach it with a borderline religious zeal [chuckles]. It has that amount of importance.

MC: It’s like one of those things that, when you’re in the moment, you have to remember, “I’m doing this right now.” It’s like sex and performing on stage. Like, “Wait I’m doing this. I need to enjoy this.”

AB: What was your best gig?

MD: The most memorable show we ever had was on March 2, 2014. It was the second show we ever had. It was one of the only days where it rained. I wanted to cancel it, but I decided against it. I decided, “fuck it.” It’s not going to be in my backyard. It’s going to be inside. It was our first headlining show. It was great. People went crazy. It wasn’t our best show, but it was our most memorable show. That was the show where I crowd surfed.

NG: Mike ended up three inches from the ceiling playing his guitar. [laughing]

It’s easy to be hypnotized by the sea breeze and beautiful people in our small town of Isla Vista. It’s easy to be content and subdued when you live in a college dream. But The Crash Landings are here to say “fuck all that.” They’re here on a mission to corrupt this town and wake us up, and it’s refreshing. So don’t sleep on their next performance and check out their live session at the Batcave. 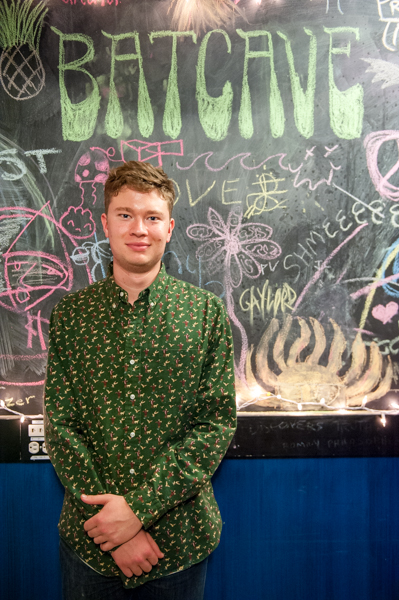 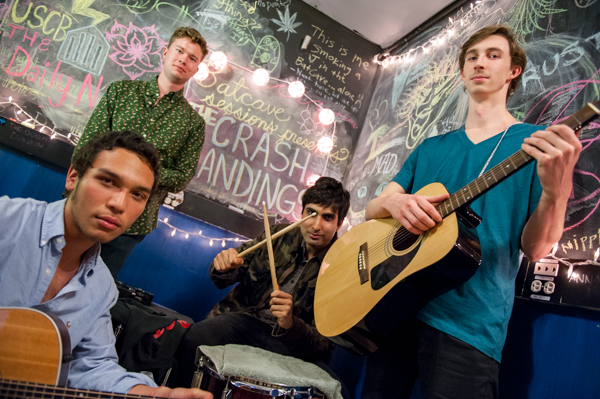 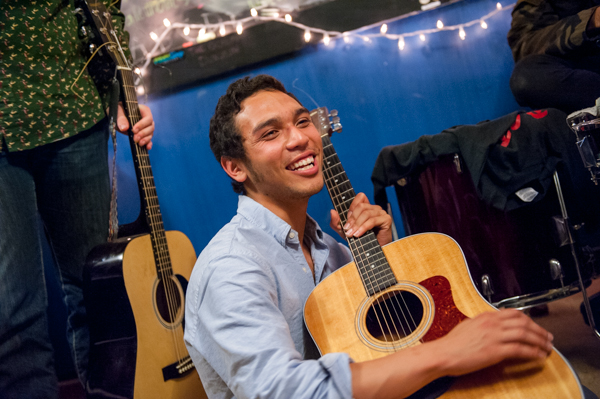 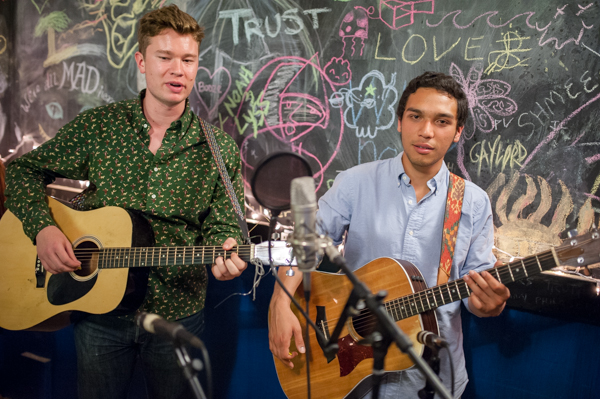