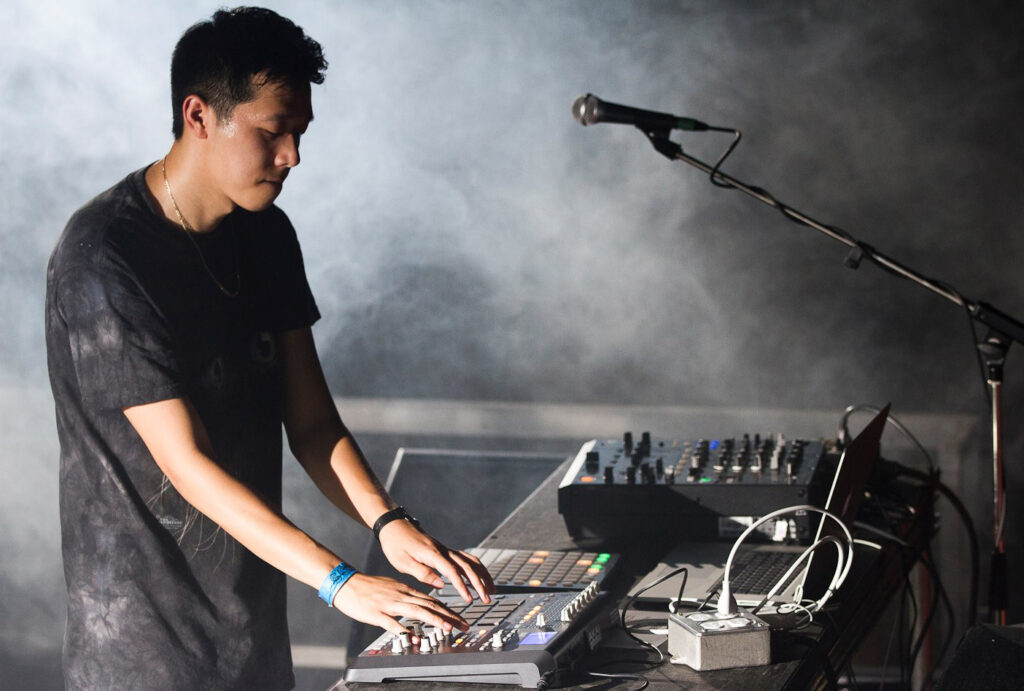 On the backmost corner table of the decidedly vacant and dimly lit VIP section of Santa Barbara’s EOS Lounge sat a deadly concoction of Jameson, ginger beer and an extra dash of Canada Dry. The owner of the drink, Charlie Yin, was deadly focused on the Macbook illuminating his face. His headphones were plugged in to drown out the consistent thud of the bass coming from the speakers of the warm-up DJ.

Yin, known to most by his stage moniker, Giraffage, looked like he was toying with a track that could very well be his next release, but will more than likely join his hefty vault of instrumental experiments that he says, “will probably never see the light of day.” He looked tired. This was the second to last stop on the No Reason tour, and he says he’s looking forward to “getting off tour and producing full time.”

His outfit, a simple pair of dark jeans and a charcoal-grey hairy-knit sweater, was minimalist yet stylish, a reflection his off-stage character — a humble intellectual moonlighting as a superstar.

The Bay Area-based DJ received widespread critical acclaim and an explosion in popularity following his recent tour with Porter Robinson and his latest EP, No Reason. Despite this, Yin worries that he “could fall off in six months … [because] with the internet, music is such a fickle industry.”

While the future of Yin’s musical career is uncertain (and I’m optimistic to say the least), one thing is clear: He has a strong sense of humility. It makes him relatable and is refreshing in his profession, which is dominated by no shortage of hubris and hyper-inflated egos.

But don’t let these comments make any doubts about Yin’s stage presence. The crowd was already riled from Spazzkid’s bouncy set and was amped for more. Giraffage took to the decks well into the evening with few words. His signature intro was met with cheers and coos from the crowd of youths. The club was bouncing to favorites such as “Tell Me” and the PandaBoY remix of “Marimba.”

Yin describes his music as experimental electronic, and this was reflected pretty clearly in the crowd. The dance floor attendees were not the usual suspects of ties and miniskirts. There seemed to be a more prevalent population of hip kids than the average Santa Barbara club evening, and these hip kids were most likely ’Raffage devotees.

The set was a rollercoaster of different feels with everything from older hits off of the XXYYXX collaboration album, Even Though, to the elusive and legally-controversial remix of R. Kelly’s “Ignition,” to the deeply distorted Giraffage remix of “Party in the USA.” And at no point throughout the set did the crowd show any signs of tiring.

The track list was a good balance of trademarked, videogame-reminiscent glitchy synths, minimal metallophone drops and a modest amount of sing-a-long crowd pleasers. Its conclusion was met with yells and scattered applause and the majority of the audience filed out of the main entrance, leaving a half-empty floor for the closing act.

For all intents and purposes, Giraffage’s set concluded the night and proved to be one of the most well-constructed and varied performances I’d experienced since ZHU’s debut at HARD Day of the Dead. And he wins a few extra points for making a Miley Cyrus song sound sophisticated.