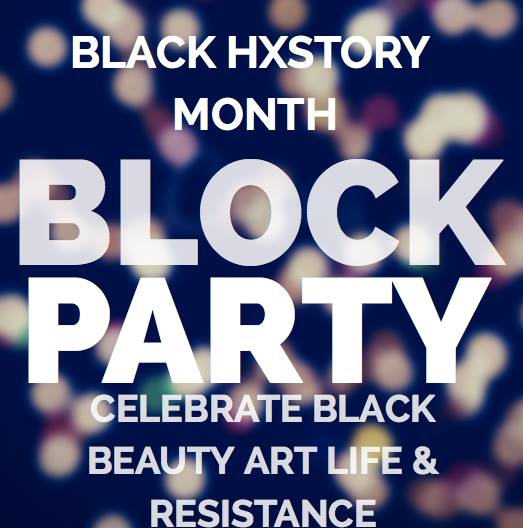 Usually, it’s too cold to function if the weather is anything less than 60 degrees in Santa Barbara. But, in spite of Friday, Feb. 27’s chilling temperature, more than 200 people came out to I.V.’s Anisq’Oyo’ Park to celebrate Black History Month with good music, poetry and company provided by UCSB’s Black Student Union.

Hosted by BSU members Monae Orange and Mouton Hennessee, the Black Hxstory Month Block party provided a range of performances, from spoken word to dance to music — all of which were held under the cloudy sky. Christmas lights hanging from tree to tree and bright green lights helped people forget about the chilly night air.

Kicking off the night with spoken word, BSU’s energetic hosts introduced Nia Aranguren and Starr Sanford to perform original pieces. Sanford dedicates her poem “Nature’s Beauty” to her girlfriend. “Even if for the slightest moment, I wanted [the audience] to understand the depths of our love,” she said in a conversation with the Daily Nexus.

Up next, Charlene Macharia presented “The African Invasion.” She started off with an accurate statement: “Y’all probably heard of the British invasion, but you’ve probably never heard of the African invasion. But, we’re here and we’re rising.” Throughout her piece, Macharia discouraged injustice and promoted love despite difference.

Known for his eye-opening poem, “The Black Bruins,” Sy Stokes charmed the crowd with three original compositions. The third-year UCLA student expressed his feelings for a taken girl in the poem “Random Thoughts.”

Wearing a shawl-collared sweater, Stokes dissed the girl’s boyfriend by mentioning that his “GPA is higher than the amount of times he’s said he loves [her].” The taken girl is currently a math major, and Stokes secretly wishes he “could fall in love with [her] so many times [he’d] have to put it in scientific notation.”

Later on, he performed two untitled poems — one dedicated to his mom, and the other to white people. With a temporary title of “30 Reasons Why I’m Pissed Off,” Stokes warned his listeners, “Shout out to all the white people because this is going to piss you the f*ck off.”

Number 11 on his list of reasons, he threatened that if one more person talks to him about about reverse-racism, he’s “gonna have to go back to Africa just like all these racist ass white people keep telling [him] to. Number 12: Never mind, they colonized that shit too.” Impassioned by his experiences at UCLA, the African-American Studies major energized the block party attendees.

For a quick break, DJ Snaps provoked dance circles with songs like “Fros in Different Area Codes.” Although it was supposed to be an intermission, he set the turn-down-for-what mood for the performances to come.

The next half hour introduced two talented dance groups. Co-host Hennessee commented on the weather forecast of rain for the night, Black Reign that is. Dressed in different-colored flannels, UCSB’s Hip Hop dance group dominated the stage with moves we all wish we had.

Repping UCLA, the Nigerian Student Association dance team strutted onto the stage barefoot. With traditional Nigerian and modern hip-hop dance moves, NSA put in werk to the beat of “Et P8 Koi” by Jovi. Co-host Orange questioned, “Can we all agree that that was too much booty for one stage?” to which Hennessee responded, “You can never have too much booty.” Snaps.

Following the dance performances, up-and-coming artists like King Courtnie from USC and Laura Lora from UCSB got us vibing throughout the night. In her oversized jean jacket and Jeffrey Campbell Celebrity platforms, Courtnie sang and swayed in her 6-inch heels to two original songs — an Afro-centric tribute called “You So” and a vibe-only piece titled “Need.”

Dressed down in black high-waist velvet leggings and a white fuzzy sweater, Lora limped her way onto the stage with a “glittery pimp cane.” Despite her recent knee-injury, her songs “Someday,” “Your Kingdom” and “Do It With Ease” had the crowd supporting her with a ton of cheers and the occasional purrs.

Individual artists such as Nathan Torres, Mylo Mu, Brandon Tory, Ugo-N-San and Bre Crosby traveled from cities such as Boston and Berkeley to celebrate February as Black History Month .

Groups like the Greco, a Class of 2015 BSU members, along with Kidd Zillah and his entourage who promoted their Limitless clothing line, claimed the stage as their turn-up platform. In cargo pants and a black crop top that showed off her abs, Ahjaeleah Price a.k.a. AJ got everyone on their feet. Alongside her fellow BSU seniors, she rapped, “Throw your hands up black people … a united front.”

To say the least, BSU’s Black Hxstory Month Block Party was a night of high energy in an artistic environment. First-year Jon Rosas was glad he came to the event because of his exposure to “how prideful [BSU] was” and how captivating the overall night was.

Poetic artist Sanford enjoyed “the ability to meet new people in the black community, not only from SB, but from other schools as well.” Props to UCSB’s Black Student Union for hosting one hell of a night. Students are already asking about when the next turn-up — I mean, block party — will be held.