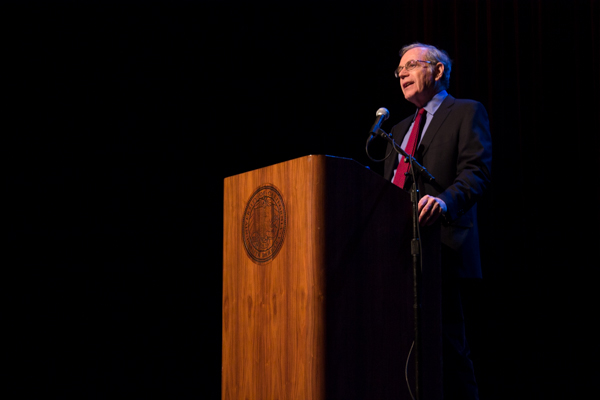 Historian Eric Foner lectures on the topic of his newest book, Gateway to Freedom: The Hidden History of the Underground Railroad. Alexander Payne/Daily Nexus

Pulitzer prize-winning author and Columbia University history professor Eric Foner gave a lecture at Campbell Hall on Tuesday evening on his recently released book Gateway to Freedom: The Hidden History of the Underground Railroad, which highlights the efforts of both whites and blacks in aiding fugitive slaves during the 1800s leading up to the Civil War.

The event was organized by the university’s Walter H. Capps Center for the Study of Ethics, Religion and Public Life as well as the department of history. During the presentation, Foner discussed significant figures and groups that worked to protect free African Americans primarily in New York, as well as the methods used by fugitive slaves to gain freedom via the Underground Railroad.

Foner said a common misconception held about the Underground Railroad is that it was a system of secret routes and tunnels when in actuality it was a series of networks of people and groups that worked together to help fugitive slaves.

“It should be understood not as a single entity but as an umbrella term for local groups that employed numerous methods,” Foner said. “It was a series of local networks that communicated with each other which over time helped a significant number of fugitive slaves escape from the South.”

Foner said the study of the Underground Railroad has had a resurgence in recent years, and has been represented in exhibits, works of art and children’s’ books.

“The Underground Railroad represents a moment in our history in which black and white Americans worked together for a common cause,” Foner said.

History Professor Ann Marie Plane said she enjoyed hosting an author whose “writing is revered in the field.”

“He’s just a wonderfully personable, humble, thoughtful scholar who exemplifies the very best of what it means to be a public intellectual,” Plane said.

According to Plane, Foner’s decision to time the lecture right after February, Black History Month, was no coincidence.

“It comes a few days after the end of Black History Month, and at a time in the country when race relations is so much on everybody’s mind,” Plane said.

First-year physics major Jeremy Zhang said he attended the lecture for credit for a class, but said he became interested in a part of American history he did not know much about.

“I think it was very interesting to see that all these stories of freeing slaves have been preserved today so that we can learn about the Underground Railroad, which has been featured a lot in popular culture,” Zhang said.

According to Foner, another misconception about fugitive slaves is they fled from the South by foot and foot alone. Foner said many slaves were assisted by steamboat captains and train passengers who smuggled them onboard.

“Many used the most modern technology available to escape, not every fugitive slaves ran through the woods like many think, although some did,” Foner said. 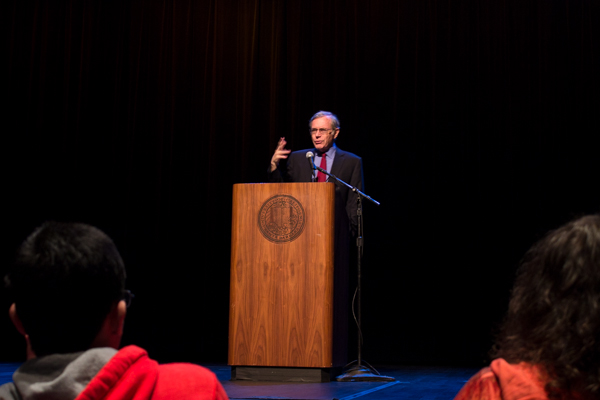 Foner said once fugitive slaves were in the North, groups such as The New York Vigilance Committee protected helped slaves gain their freedom.

“The New York Vigilance Committee survived all the way to the Civil War, and took part in a remarkable range of public and secret activities,” Foner said. “They were effective in preventing fugitive slaves in the North from being recaptured and sold back into slavery.”

Foner said a common misconception about the Underground Railroad is that “conductors,” individuals like Harriet Tubman who helped guide fugitive slaves through the escape network, were commonplace.

“Very few people actually went down to the South from the North to help extract fugitive slaves,” Foner said. “While the stories of Harriet Tubman are very heroic and are often popular topics in literature, accounts of these conductors are rare.”

Zhang said he was most surprised by the numbers of formally organized groups in the North that helped fugitive slaves reach safety.

“Without these groups not as many fugitive slaves could have made it north,” Zhang said. “I think for today’s issues we can learn from this — that people helping people yields the best results.”