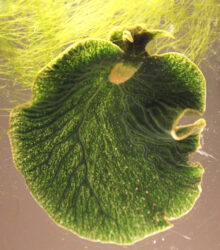 Scientists recently discovered a sea slug that can survive for months on photosynthesis­­ – much like a plant­ – by incorporating genes from algae into its own chromosome.

The V. litorea algae found on the E. chlorotica slug’s chromosome encodes for a protein necessary to carry out photosynthesis by chloroplasts, which are typically found in plants, and generates carbohydrates and lipids that keep the slug alive even during starvation conditions for up to nine months.

It was previously noted that E. chloritica uptakes and incorporates algal chloroplasts into its digestive cells. Now, however, researchers understand the basis for the slugs’ successful and prolonged photosynthetic abilities: a group of algal genes responsible for regulating chloroplast function and repair are incorporated into the slug chromosome. Subsequent slug offspring incorporate their own algal chloroplasts into their cells, but maintain the hereditary genes that inserted themselves into the host slugs’ chromosome many generations before.

The revolutionary finding exemplifies rapid evolution and the first known instance of horizontal gene transfer across multicellular species, and holds promise that similar mechanisms of gene therapy can be used to cure human diseases. 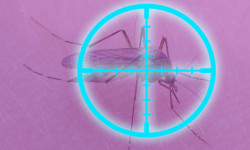 Researchers from Tohoku University in Japan reported in the journal Scientific Reports that particular species of insects can be killed by certain wavelengths of visible light. Blue light, with a wavelength of 467 nm, had a nearly 100% mortality rate on the fruit fly pupae. The study’s findings may lead to help farmers and gardeners effectively eradicate pests without harmful side-effects to humans and the environment.

Multiple wavelengths, however, will be necessary to kill different specifies; this may require wavelengths such as UV light, which has high risk of toxicity to humans.

In a major breakthrough in astronomy, the Parkes Telescope in New South Wales, Australia, Petroff caught an image of radio waves during the millisecond they burst. During their short-lived burst, the tight band of radio-frequency produce the equivalent amount of energy as does the sun in a single day.

Surprisingly, the waves vibrated in two planes and were circularly polarized rather than linearly 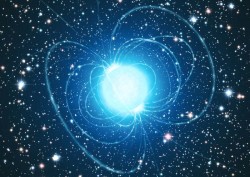 Artist depiction of the magnetar, a type of neutron star, from which the tight band of radio waves observed by the Parkes Telescope in New South Wales may have originated. Image courtesy of European Southern Observatory (ESO)

polarized. Researchers believe an oversized neutron that collapsed was spinning so quickly that relativity made it seem lighter and it did not form into a black hole. The radio waves may have also originated from a flare from a magnetar, a type of neutron star with an extremely strong magnetic field.

The signal is dispersed like a rainbow – with higher frequency waves reaching us first – and a denser medium creates a greater dispersion. Calculating the density of the medium could provide knowledge on how our universe evolved.