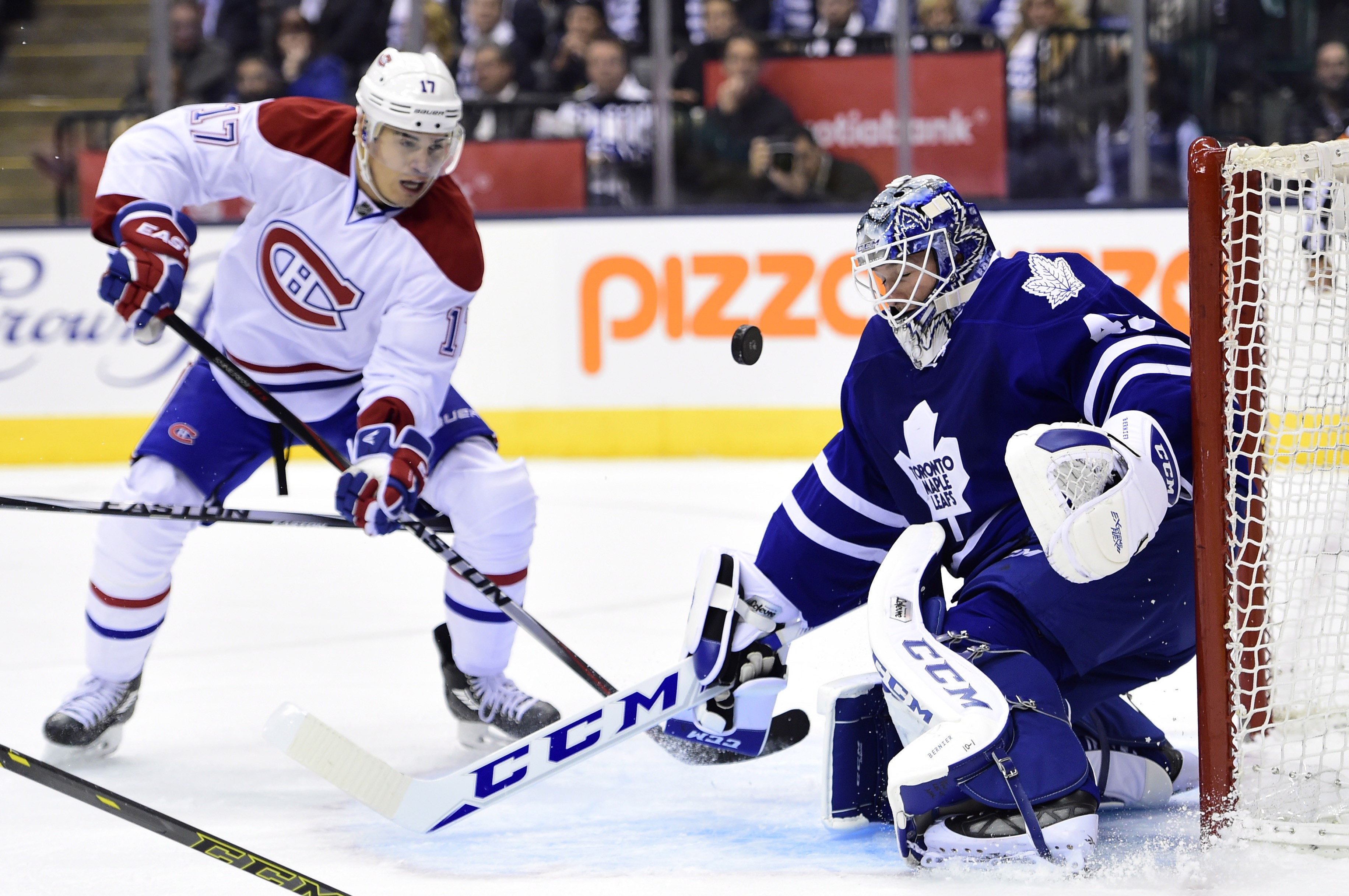 Today marked the NHL trade deadline and throughout the week there have been a flurry of teams who have done whatever they can to acquire the key piece for a successful postseason run. The Rangers solidifying their defense by trading for Keith Yandle, the Blackhawks acquiring Antoine Vermette and the Kings snagging Andrej Sekera were just three of approximately 29 trades initiated in the last two days alone.

The bottom-tier teams continued to fall pray to the NHL’s elite this week for the most part; however, the Ottawa Senators have not so quietly become a serious threat to make the playoffs thanks to a huge west coast road trip. The infamous “Ring of Fire” road trip that includes consecutive games against the Ducks, Kings, and Sharks was no problem for the Senators who stymied a talented Anaheim squad and then broke the defending Stanley cup champion’s eight game winning streak one night later. Ottawa still finds itself seven points behind Boston but this will be a chase to monitor down the stretch as multiple teams are vying for the final wild card spot in the Eastern Conference and Ottawa is not the only dark horse looking to make some noise.

Montreal Canadiens (41-17-5) – Montreal moves into the top spot in this week’s rankings with three straight wins this week, including a 5-2 win over St. Louis on Tuesday. Carey Price has the Vezina Trophy just about locked up with a league leading 36 wins, 1.88 goals against average and .936 save percentage. (+3)

St. Louis Blues (40-18-5) – St. Louis continues to harass its opponents with depth, talent and the top power-play in the Western Conference. The addition of defenseman Zybnek Michalek and veteran forward Olli Jokinen add leadership and another blue line presence to a team looking to make a deep postseason run. (0)

Nashville Predators (41-16-7) – Nashville has been playing fall below their normal level of play as they find themselves in a season-high three game losing streak. The Predators remained neutral at the trade deadline, which will be a heavily scrutinized move if Nashville is unable to increase their level of play down the stretch. (-2)

Anaheim Ducks (40-17-7) – Anaheim had a bounce-back week, including a thrilling 4-2 comeback win over their crosstown rivals the Los Angeles Kings on Friday. The Ducks proved to the league that they want to win now with the addition of Tomas Fleishcmann and All-Star defenseman James Wisniewski. (+2)

Tampa Bay Lightning (38-20-6) – Tampa Bay was able to split their two games this week, but none of their recent struggles can be attributed to their electric offense. The Lightning own the league’s top scoring offense and have averaged 4 goals per game over their last 7 games. (-2)

New York Islanders (41-21-2) – New York continues to battle through an injury-laden roster exceptionally well as they refuse to relinquish their spot atop the Metropolitan Division. Islanders captain John Taveras has been spectacular all season long and currently leads his team in points, goals, assists and power-play points. (-1)

Chicago Blackhawks (38-21-5) – Chicago was hit hard this week as their All-Star forward Patrick Kane broke his clavicle and will be out for at least three months. The Blackhawks did seem to try and compensate by headlining the trade deadline with the acquisition of coveted forward Antoine Vermette and solid defenseman Kimmo Timonen.  (+1)

New York Rangers (39-17-6) – The Rangers have been the NHL’s most surprising success story in recent weeks as Cam Talbot continues to impress with a 9-2-2 record since replacing Henrik Lundqvist in net for the blue shirts. New York arguably made the biggest splash by landing Coyotes defenseman Keith Yandle who will pair with Ryan McDonagh to create a formidable defensive duo. (+1)

Detroit Red Wings (35-15-11) – Detroit followed the trend of making subtle, yet important lineup upgrades with the additions of Marek Zidlicky and Erik Cole. Cole should bring a beneficial scoring touch to the Motor City as he had 18 goals for Dallas before being shipped to Detroit. (-2)

Pittsburg Penguins (36-17-9) – The Penguins were able to capitalize on a quiet week with two wins, including a huge victory over Washington on Wednesday. Marc-Andre Fleury is on fire in net and currently leads the league with eight shutouts. (+1)

Minnesota Wild (33-22-7) – The Wild continue to roll with their only loss in their last six games being a surprise 2-1 loss to Edmonton. Minnesota has been playing stellar defense, allowing only 7 goals over the last 11 games and the addition of Jordan Leopold from Columbus will only strengthen this unit going forward. (+2)

Washington Capitals (34-20-10) – Washington was able to use the Toronto Maple Leafs to break a three-game winning streak and gain some ground in the competitive Metropolitan Division. Nicklas Backstrom and Alex Ovechkin have been arguably the league’s best duo and find themselves tied at 65 points each. (-2)

Vancouver Canucks (36-23-3) – The Canucks have been another team that has impressed as of late; however, their only losses in the past two weeks have come against New Jersey and Buffalo. Eddie Lack has filled in admirably for injured goalie Ryan Miller, posting a 3-1-0 record including wins over the Islanders and the Blues. (+3)

Los Angeles Kings (29-21-12) – The defensing Stanley cup champions have crashed back down to Earth with three straight losses and their playoff hopes right back in jeopardy. The goaltending must improve as Los Angeles has allowed 9 goals in their last two games.(-2)

Winnipeg Jets (32-20-12) – Winnipeg has been among the most active buyers at the trade deadline and this weekends acquisition of productive forward Jiri Tlusty shows that the Jets believe that they can do some real damage in the postseason. Tyler Myers looks like he can be a star in Winnipeg as he has notched points in all but two of his games since being brought over from Buffalo. (+5)

Calgary Flames (33-25-4) – Calgary finds itself back in the playoff picture thanks to the unimpressive play of both Los Angeles and San Jose, but losing Mark Giordano for the rest of the season hurts. The Flames captain led the team with 48 points, 37 assists, and 14 points on the power play. (-1)

San Jose Sharks (31-25-8) – San Jose is mired in a serious slump and have lost 8 out of their last 11games. Their offense lacks the usual spark that makes them so dangerous and unless they make some drastic changes they are in serious trouble of missing out on the playoffs for the first time in 10 years. (-3)

Ottawa Senators (27-23-10) – How about that supposedly brutal west coast road trip? The Senators made quick work of the Ducks, Kings and Sharks thanks to three wins, including back-to-back shutouts from rookie goaltender Andrew Hammond. Ottawa has won five games in a row and now find themselves only 7 points out of a playoff spot with three games in hand. (+7)

Boston Bruins (31-22-9) – Boston continues to hold onto the final playoff spot in the East but it seems like they are inevitable to be passed. The Bruins may have finally found their edge though as they have won two games in a row over the Devils and the slumping Coyotes. (0)

Florida Panthers (28-22-13) – Florida has spent the last two weeks failing to capitalize on the futility of the Bruins but doing just enough to hang around and make things interesting. The addition of Jaromir Jagr adds leadership ad experience and will be expected to provide the spark necessary to lift the Panthers into the postseason. (-2)

Jagr scores 1st with Panthers, ties for 5th all time
21.

Philadelphia Flyers (27-25-11) – Philadelphia has been almost impossible to figure out as their last seven games include wins over Nashville, Washington and the Rangers, but losses to Columbus, Toronto, Carolina and Buffalo. The Flyers will have to capitalize against the bottom-tier of the league as they find themselves six points behind Boston for the final wild card spot. (-3)

Colorado Avalanche (27-25-11) – Colorado has played well as of late to pass Dallas and work their way out of last place in the Pacific Division. They have won 3 of their last five and have averaged four goals per game over that span. (-1)

Carolina Hurricanes (24-31-7) – Carolina has been on an impressive tear lately and not only have won four of six games, but secured some nice assets in the trades with Winnipeg and Los Angeles. The Staal brothers and Jeff Skinner continue to play well as the top line provide hope for the Hurricane’s future. (+3)

Jordan Staal sends a pass across the crease to Michal Jordan who converts it for the goal #CARvsNYI
24.

New Jersey Devils (26-27-10) – New Jersey forward Mike Cammaleiri is earning himself some nice money in the offseason with the way he is finishing the season. He has notched 3 goals and 2 assists over the Devils last four games and currently leads the team with 23 goals and 33 points overall. (-1)

Dallas Stars (27-26-10) – Dallas now finds themselves in the basement of the Pacific Division and the benching of Kari Lehtonen shows that this team has some serious issues to address in the offseason. The offense needs no addressing as eight different Dallas players have scored more then 10 goals for the Stars this year. (-3)

Columbus Blue Jackets (26-32-4) – Columbus continues to suffer from a down year as they have lost six in a row and are allowing an abysmal 3.83 goals per game during that streak. Their lack of consistency in net shows the importance of getting All-Star goalie Sergei Bobrovsky healthy for next season. (-2)

Toronto Maple Leafs (25-33-5) –Toronto has been on a steady decline since February and now find themselves in complete rebuild mode. Maple Leafs All-Stars Phil Kessel and Dion Phaneuf were both serious trade bait throughout the day but it looks as if they will both finish their seasons in Toronto. (+1)

Edmonton Oilers (18-35-10) – Edmonton has given headaches to top-tier teams throughout February and should continue to do so down the stretch. They have lost five of their last seven games but have shown serious potential for the future of this franchise in wins over Minnesota and Boston. (+1)

Buffalo Sabres (19-39-5) – Buffalo has worked their way out of the bottom of the rankings with wins over Columbus and Vancouver in the last week. They picked up a few nice pieces after the trade deadline and their offense has shown some life, averaging over 3 goals per game this week.  (+1)

Arizona Coyotes (20-36-7) – Arizona now finds themselves in the bottom spot of the rankings as they initiated a dramatic fire sale this week and shipped away a handful of their top contributors. The plus-side is that they received quite a few impressive prospects and sure-fire first overall draft pick Connor McDavid has 102 points in only 39 games this season in the OHL. (-2)