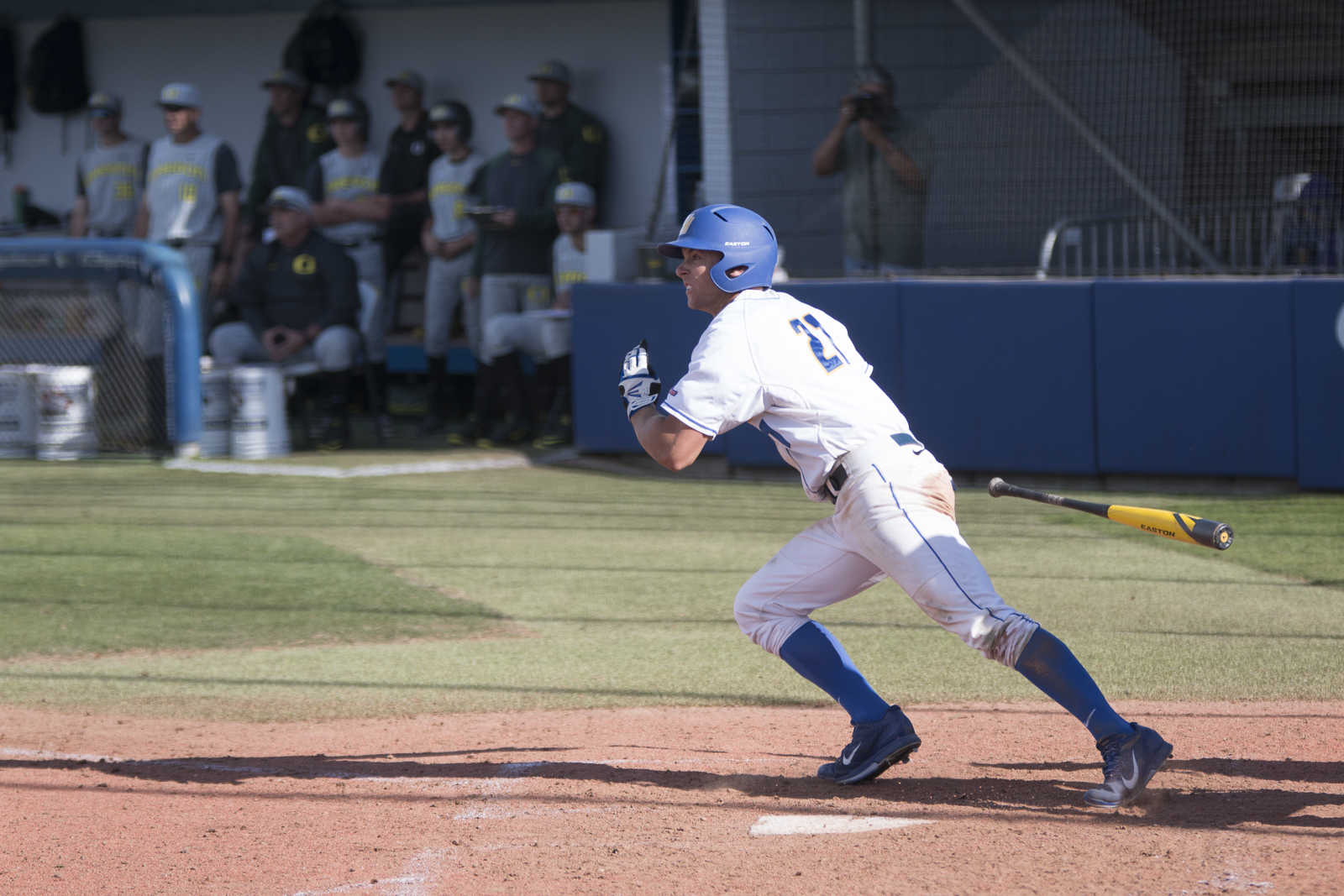 With eight scoreless innings and only one run scored in the ball game, UCSB’s baseball team fought to avoid a sweep at home in its 1-0 victory over the University of Oregon in the last game of a three-game series.

After going 1-2 over the weekend, the Gauchos go into this week with an 8-3 overall record, and third place standing in Big West. The Ducks now stand third in the Pac 12 as they add two wins and a loss to their 10-2 overall record.

“It took a lot of poise coming back after losing two games, and no one wants to get swept at home,” Head Coach Andrew Checketts said. “There were a lot of tight situations and Jacome was able to make some big pitches.”

In Sunday’s game, junior lefty Justin Jacome shut out the Ducks for eight innings. In the top of the eighth, Checketts visited the mound only to leave Jacome in to face a lefty batter with runners on second and third. With another allowed walk to load the bases, Jacome got out of the inning after junior first baseman Brandon Cuddy flied out with a line drive to senior left fielder Cameron Newell.

“[Checketts] told me that this was my guy, and unfortunately though I walked him, I was doing the best I could,” Jacome said. “I wanted the next guy even more, and that out was a huge out for us.”

Jacome’s win marked a bounce-back game from his loss against Kentucky last weekend. In his 8.1 innings pitched against the Ducks, he recorded his second win of the season with 10 strikeouts. Being passed the baton in the ninth, junior righty reliever James Carter came in for his fourth save. Carter maintains a 0.00 ERA through 7.1 innings pitched.

“I needed this confidence booster,” Jacome said. “Everything was working for me — my sliders and my change ups. I’m not big on striking out guys, I usually try to get the pop-ups and ground balls, but I was getting the strikeouts [Sunday].”

Newell preformed at the plate on Sunday, scoring the only run of the game with his second homer of the season to deep right field off of the Duck’s starting pitcher, senior right-hander Jack Karraker. Karraker pitched through six and allowed three hits to the Gauchos.

“I got a really good swing off,” Newell said. “Thing’s weren’t really going great for us this weekend and I didn’t think one run was going to separate this game, but Jacome did an outstanding job and was the reason we won the game.”

Though the series ended in a Gaucho win, the Ducks posed as a strong competitor taking two games and the advantage in the series. In his start on Saturday, sophomore righty Shane Bieber fell victim to Oregon’s offensive strength as the Ducks dominated 11-3.

“Even though Bieber got beat up [on Saturday], I still think he executed fine. He had a couple weird innings, but he gave us a chance,” Checketts said. “We’ve still got the ‘seventh and eighth inning’ issue where we still don’t really know what we’re going to do.”

On Saturday afternoon, five Ducks recorded RBIs and Cuddy racked up seven of a total 11 team RBIs with a triple and a home run. The Duck’s starter freshman lefty David Peterson pitched through six innings and allowed only four hits to UCSB.

“This is a gut-check series for us, losing the first two and coming back [Sunday],” Newell said. “It showed how tough we are, and our ability to bounce back forward for the rest of the season.”

Junior righty Dillon Tate took the mound in the series-opening 5-1 Oregon win, and recorded his first loss of the season. Tate shutout Oregon through five innings, allowed one run in the sixth and two in the seventh. He ends the weekend with a 1.29 season ERA.

“[Tate] was outstanding,” Checketts said. “He looked like a bonafide All-American starter.”

Tate’s solid start was not enough to secure a Gaucho win, as freshman shortstop Clay Fisher was the Gauchos’ only run in Friday’s game, and was driven in by sophomore leadoff hitter and center fielder Andrew Calica. Oregon’s Friday pitchers held the UCSB offense to only five hits.

“Offensively we’ve got to go to work, our team batting average probably dropped over fifty points this weekend and we have to be able to have better at-bats against quality pitching,” Checketts said. “We have to even up our strokes. We’ve gotten too many backwards ‘K’s,’ where we haven’t been swinging with two strikes. That’s just one of the learning experiences.”

The team will host the Pac 12 league leader, and undefeated USC as the Trojans travels to Santa Barbara for a one-game appearance at Caesar Uyesaka Stadium on Tuesday at 2 p.m.