The Daily Nexus
Sports
Men’s Basketball Grinds Out Win at Home Versus Irvine
March 2, 2015 at 5:07 am by Mark Salay 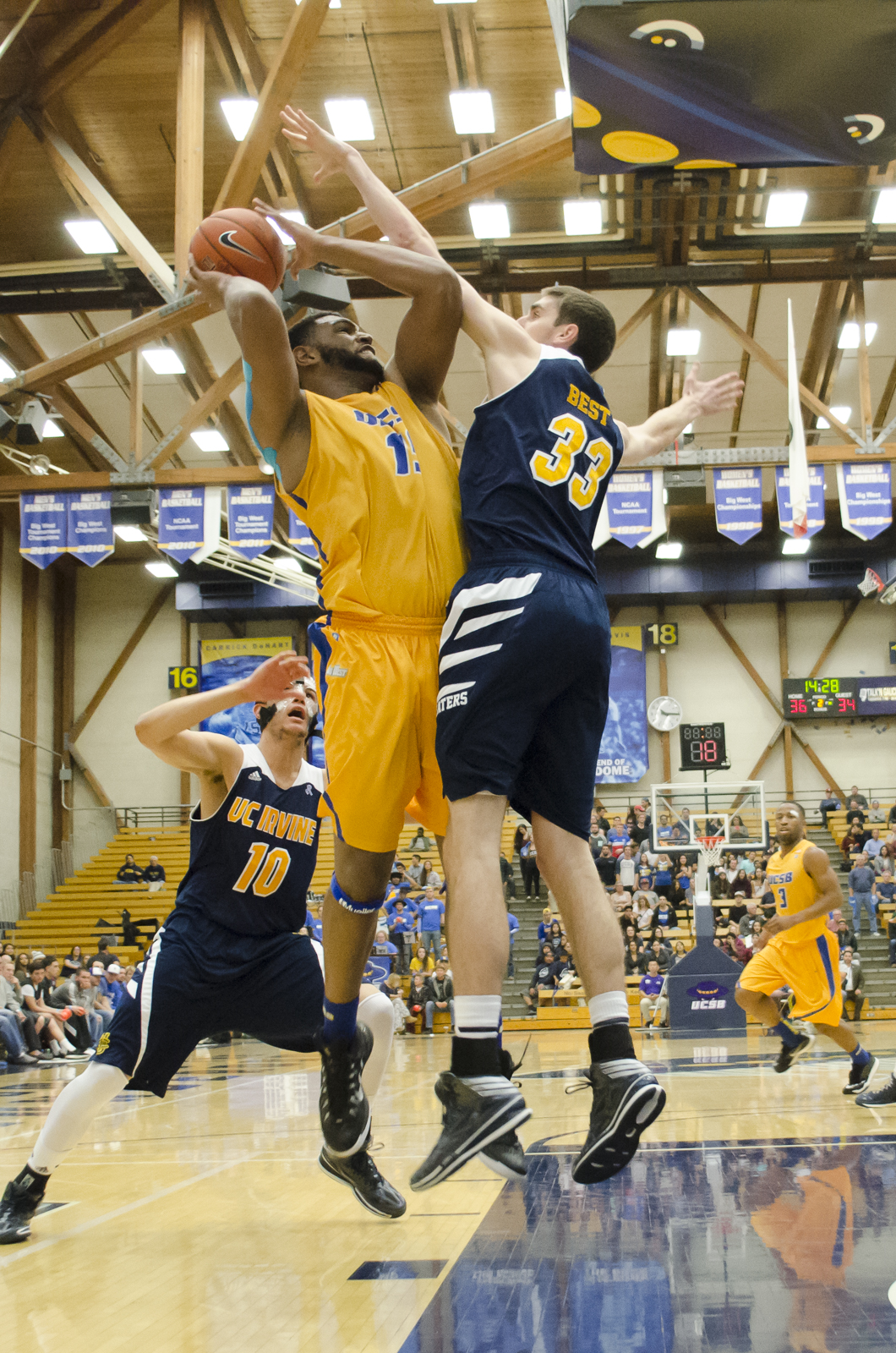 ‘Big Al’ Williams dominates an Anteater as he drives for the hoop. Sam Aragon/Daily Nexus

It seems as if the pieces are coming together for the UCSB men’s basketball team.

For a team that has battled injuries on and off, Saturday’s gritty 54-51 win over UC Irvine at the Thunderdome displayed why many tabbed the Gauchos as favorites in the Big West.

Led by senior center Alan “Big Al” Williams’ 15 points and 15 rebounds, the Gauchos held off the second place team in the conference in the final moments to improve to 9-5 in league and 16-12 overall. The win, UCSB’s third straight, keeps the team in third place in the standings, but breaks a tie it previously held with Long Beach State.

“We’re finally all together, everyone’s healthy right now,” freshman guard Gabe Vincent said. “We’re just finally being able to show people the team we really are. I think we’re one of the best out here when we do what we do. We didn’t shoot it well [Saturday], but we still played well.”

Senior guard Zalmico Harmon’s three pointer with 1:25 left in regulation tilted the advantage in favor of UCSB, putting the score at 49-45 and forcing the Anteaters to foul the rest of the way.

“The key was to get stops, we’re a great team when we get stops,” Vincent said. “We were trying to find the inside-out with their zone and try to get to the middle, that way we could create more, and get the ball inside and get some layups.”

Big Al was the difference for UCSB. Williams did not play against UCI in the season’s previous encounter, however, his defense Saturday on 7’6” Mamodou Ndiaye — the tallest player in Division I — forced the sophomore center into five turnovers and only six points. Williams made the night difficult for Ndiaye, who played a total of 13 minutes.

Although the team shot only 40 percent from the field, Big Al’s boards helped offset the poor shooting night.

“Al rebounding in the paint was phenomenal,” Head Coach Bob Williams said. “The best thing we did all night was Al went and got rebounds, and then we took care of the ball, we didn’t turn it over. Those were our two keys offensively.”

For UCI, Davis led the way with 16 points and was the only player to score in double-figures for the Anteaters.

“In the first half [Davis] hurt us a little bit because he’s athletic, he’s pretty quick,” junior forward Mitch Brewe said. “He has good moves inside, but I think second half we thwarted his moves a little bit. We were able to keep him at bay.”

In a game televised by ESPN2, a season-high 4,716 attended the game.

The Gauchos are back on the court Wednesday when they travel to Hawaii for a game set for 9 p.m. locally.