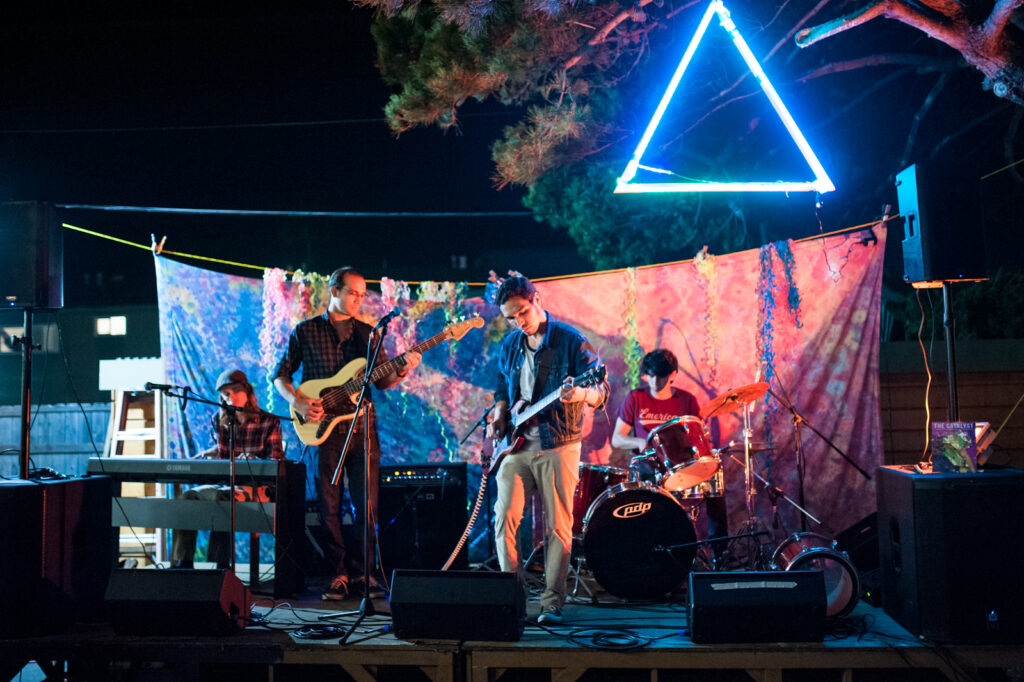 Love, the sublime and creation would be virtually unimaginable without their offspring: the arts. The art of Isla Vista is a penetrating reminder of how fortunate we are to live here, able to enjoy our beautiful community’s commitment to creation. The Catalyst Contemporary Literary Arts Magazine showcases Isla Vista’s love for art in the purest modality.

The party was chromatic, colorful and completely free. Local food and coffee vendors doled out samples of their products alongside young artists displaying and selling their work. The event kicked off at 5 p.m. and ran straight through the night with live performances from Killer Kaya, Dad Clothes, Plan B, Smooth Weirdos, Otis and Underbelly. The artistic affair had countless other special attractions including the Lucidity tent, face painting, caricature drawings and a live collective mural which was open for anyone to tag. The small parking lot and seating area of the Co-op overflowed with people of every smell and style. Poets, hippies, hobos, bohos, surfer dudes, surfer chicks, trippers and dippers all donned big grins and sparkling eyes throughout the show.

The collective live mural was an especially intriguing and novel idea. Lauren Davis, a third-year English major, was commissioned to draw the piece after members of The Catalyst saw her unique style of sketches in which she connects her drawings with one single continuous line. The mural featured geometric mythical animals interspersed throughout an Isla Vista cityscape.

Davis was a little apprehensive about letting people have free reign to color in the outlines of her work. “At first I thought that I was going to be protective of the art tag,” she said. “But it’s a community piece and it’s not as soul wrenching as I thought it would be and it’s actually turning out really good … Grab a brush and come paint.”

Across the lot sat the Lucidity chill lounge. Floor pillows and burning incense made the space perfect for people looking to have a seat and relax. The good folks from Lucidity also set up a statue called the Kindred Quest Altar. The structure recounted the six-year story arch of Lucidity and explained the theme of the hero’s quest that serves as the foundation of the festival.

Not only does The Catalyst promote writers and artists, but the quarterly Launch Party serves as a marketplace for local artisans to sell their goods. Among the artisan village was vivid and intense photography from the Kashmir region of the Himalayan Mountains by Nathan Silverglate, clever and dainty recycled sea glass necklaces by the I.V. Sea Glass Collective, radically original hand-cut and inexpensive clothing by Edgar Ballestero’s Endless Paradise, and of course, the bursting psychedelic tapestries of Tribe Ties.

But the main attraction, as with all I.V. events, was the blossoming sounds of local talent coming from the music stage. Underbelly was the first band to get the show going and their abstract sound fit in perfectly with the wild art suffused throughout the lot. Otis came next, featuring both male and female vocalists whose jam folk style effortlessly spread the love.

Smooth Weirdos was a personal favorite; the power duo from Humboldt County started off their set with a violent thrash punk song and then transitioned into some bona fide smooth and weird shit. The drummer’s yells to back up the guitarist/vocalist were so bold and so full of raw passion that the hairs stood up on my arms.

Plan B kept the grooves going strong with an old-school jam feeling that anyone could swing and dance to. Dad Clothes played an awesome set. Their clean-cut combination of melodic keys and sweet vocals from their leading lady were sugary on the ears. Dad Clothes also did numerous covers, including “Dancing in the Moonlight,” that had the tightly packed crowd singing aloud. Killer Kaya closed out the night with their own brand of psychedelic funk rock. Lead lady singer Apoorva Chiplunkar played around with mic effects, and at times her voice landed straight into a throaty wolf’s howl.

As a whole, The Catalyst is a thrilling project, a medium for artists to be read and enjoyed. Not for profit or glory, the literary arts magazine collective channels and shares the community’s love of art.

If you would like to be a part of the creation, there are multiple ways to get involved. Sign up for the class INT 185 CW on G.O.L.D. to be a part of the composition of the ’zine. To display your art or perform at an event, contact The Catalyst at thecatalystucsb@gmail.com.

Next quarter’s magazine is the Isla Vista Special, so all you creative types out there should start writing and sketching about how Isla Vista is significant to you. The Daily Nexus would like to congratulate our friends at The Catalyst for their astounding success. Thank you for helping the community thrive!