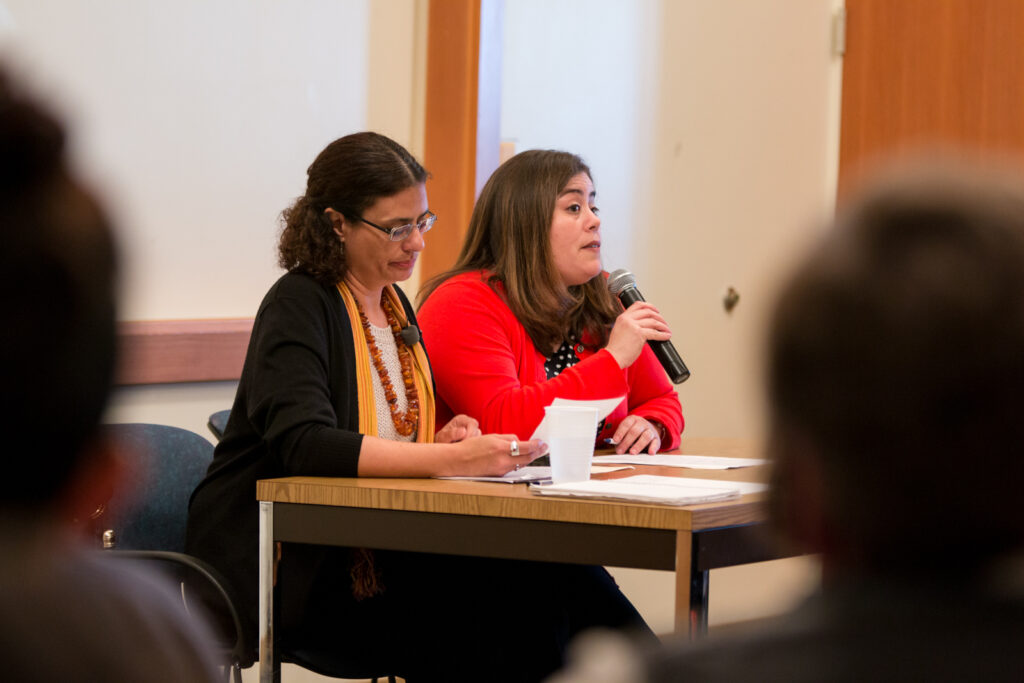 Alicia Civera Cerecedo (left) tells the story of how the government failed to act during the Ayotzinapa massacre while Gabriela Soto (right) translates. (Stephen Manga/Daily Nexus)

Principal Researcher of the National Polytechnic Institute in Mexico City Alicia Civera Cerecedo presented a lecture in HSSB on Monday night about the 2014 mass kidnapping of Ayotzinapa students in Iguala, Mexico, and giving a historical account of government corruption surrounding the incident.

Titled “The Ayotzinapa Student Massacre and the Rural Teacher Training Schools in Mexico: A Historical Perspective,” the event drew around 100 attendees and covered the history of Mexico’s teacher training schools and the September disappearances of 43 students from the Raúl Isidro Burgos Rural Teacher’s College of Ayotzinapa. Cerecedo discussed the social movement that arose in Mexico after the kidnappings, the history of teacher training schools in Mexico and baseless narratives that are being forced onto teachers’ reputations by the Partido Revolucionario Institucional (PRI) government in Mexico.

Sixty percent of the population in Mexico over the age of 15 are in a situation of “lack of education or of not being fully educated,” and people who reside in rural areas have an average education of 6.4 years, according to Cerecedo. She also said Mexican youth are forced to enter cities or migrate to the U.S. because of acute poverty in rural Mexico, and many face challenging economic circumstances and must resort to the drug trade to survive.

“The civil society is in a state of disbelief and the judicial process day-to-day becomes more apparent that it has been impeded,” said Cerecedo.

According to Cerecedo, drug traffickers provide health services and security when the state fails to do so; however the line between government protection and drug cartel protection is becoming increasingly blurred. Cerecedo said drug trafficking is clearly becoming more integrated into the government entity.

“In the case of Iguala, it became patently clear that drug trafficking is at all levels and in all types of government,” Cerecedo said. “Municipal, state, federal — in the executive, judicial and legislative. In the army as well.”

According to Cerecedo, the Mexican government is using corrupt forms of control and abusing their power by projecting societal problems of illiteracy and poverty onto the teachers. Cerecedo said the Mexican media, which is strictly controlled by the PRI regime, also blames teachers for the failures of the education system.

“The disappearance of the students happens at a time when you have social conflict and increasing social violence and an economic crisis all coming together,” Cerecedo said. “And it’s at a time when teachers are putting face against PRI authority or challenging the PRI.”

According to Cerecedo, the PRI came into power two years ago and has since targeted all opposing political parties or ideologies with hostility.

“[The PRI] identifies all political parties as a political class without ideas,” Cerecedo said, “[They] are distributing power among themselves which results in a lot of corruption.”

Associate professor in the history department and event translator Gabriela Soto Laveaga said she hopes the story of the missing students was thought-provoking for students on campus.

“It’s powerful because … the students who disappeared are your age,” Laveaga said. “I think that’s really poignant. Forty-three people disappeared and were tortured because they were studying.”

“I think we tend to be really disconnected out here. Sometimes we forget that in most countries its students are the activists,” Laveaga said. “It’s students who are really involved with social change. And maybe Mexico is not that far — it’s our neighbor to our south. And we could be a little more aware of the power of university students in other parts of the world.”

Fourth-year sociology major Karla Estrada said she attended the event to get a different perspective on the events that unfolded during the 2014 Iguala mass kidnapping.

“I wanted to come to the event because I was aware of the massacre in Iguala and I wanted to get a first-hand account from the professor who is directly from Mexico City,” Estrada said. “She obviously has a really different perspective from professors here in the UC. A lot of my professors talk about what happened, but I felt like I just wanted to get her input.”