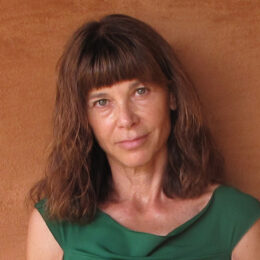 The stage was a woven rug, on which stood a podium, a mic stand and a flowerpot. The backdrop was a bare color-changing screen. It was a simple arrangement, but it was enough for the performers of “Speaking of Francesca Marciano.” In this cozy setting of downtown Santa Barbara’s Center Stage Theater, local actors read stories from author Marciano’s latest book, The Other Language.

With its spotlights and black painted walls and ceiling, the small theater gave its audience the impression of being backstage. Light Mediterranean melodies played before the show, creating a relaxed atmosphere The performance was part of the ongoing Speaking of Stories program, which produces monthly, live readings of stories on topics like humor, food, and romance. Speaking of Francesca Marciano drew in a mostly middle aged and older crowd of both passerby and subscribers to Speaking of Stories. Featured in this event were Meredith McMinn, Anne Torsiglieri and Ann Dusenberry, all experienced actors who have performed or directed in Santa Barbara.

McMinn was first at the mic, reading “Chanel,” a tale of one impulsive purchase that comes to represent unfulfilled dreams. McMinn switched effortlessly between the dialogues of the characters: deep voiced Pascal, and high, squeaky Caterina. She had a way of generating excitement and suspense, emphasizing long syllables and holding up a hand as though always prepared to snap.

Following McMinn was Torsiglieri’s performance of “The Italian System,” the story of an Italian woman in New York writing a book to contrast the pragmatic habits in American life with the “nonchalant” flair of Italian culture. Torsiglieri captured such nonchalance in her reading, adopting a witty Italian accent for the main character’s dialogue but maintaining a casual tone throughout. Those who didn’t know better might assume she was retelling a personal story.

After a brief intermission, Dusenberry read “Roman Romance.” This last story reminisced about lost love between a Wisconsin rock star and a discontent Italian woman. Dusenberry tinged her performance with the same wistfulness of the story’s characters, her careful delivery enhancing the story’s many shifts from present to past.

As a whole, Marciano’s stories skillfully capture the charm of her native Italy. Though her characters express disappointment for their current lives and yearn for bygone glory, she injects humor into the most unexpected places, often by poking fun at both Americans and Italians. She colors her tales with intimate details like the underwear on Italian laundry lines and the overabundance of American ice cream flavors, immersing the audience in her worlds.

“[I’m curious] as to what happens next for the characters … [There were] lots of open ended questions,” Powers said.

Of course, the success of the stories must also be credited to the performers. As McMinn, Torsiglieri and Dusenberry flipped through the pages of their binders, it was clear that they weren’t simply reading. No doubt each performer had practiced the stories thoroughly, perhaps half a dozen times in front of a mirror, in order to make them into their own works. The finished product spread loud laughs and gripped the audience’s attention.

Doug Harris, who holds season tickets to “Speaking of Stories,” found this performance especially enjoyable. “The readers were able to really get across the feelings of the stories. The second one in particular … her ability to use the Italian accent … made the story very funny,” Harris said.

Former actress Sylvia Short knows all three performers personally and came to the event specifically to see them. “This is one of the best groups of actors you can find,” Short said before whisking off somewhere, most likely to meet up with the onstage trio.

Rarely is reading imagined as more than a silent, solo act. McMinn, Torsiglieri and Dusenberry challenged that notion as their voices brought the characters and worlds of Marciano’s stories to life. Talented performers like them remind us of the immense power behind the spoken word.

For more information on “Speaking of Stories,” visit speakingofstories.org.