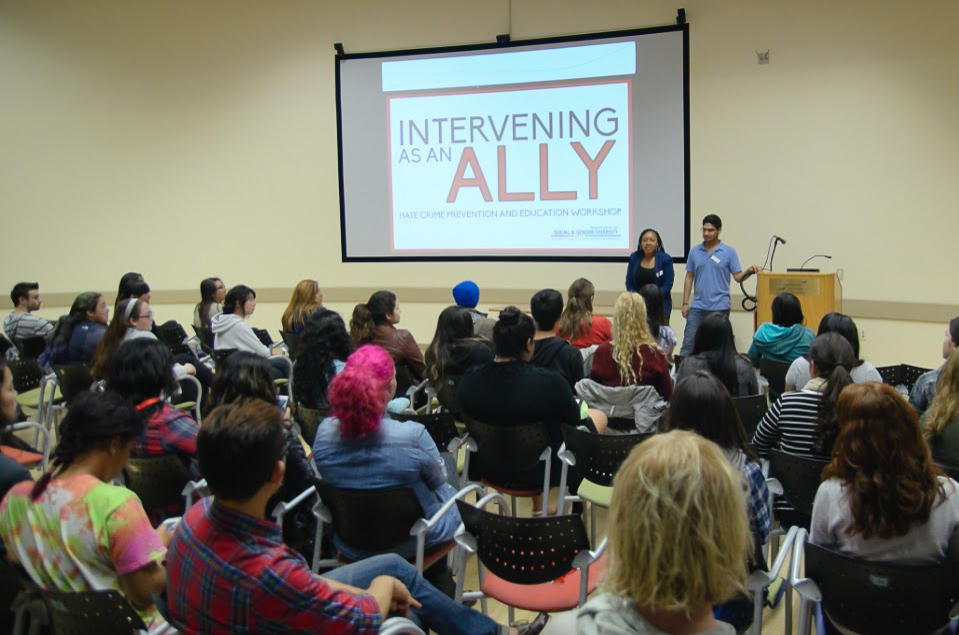 A presentation at the Intervening as an Ally workshop held at the SRB. The training explored methods to respond to microagressions, create safe spaces, report hate crimes and more. (Alex Nagase/Daily Nexus)

The Resource Center for Sexual and Gender Diversity (RCSGD) hosted a campus-wide workshop on “Intervening as an Ally” in the Student Resource Building (SRB) last night to address hate crimes and other incidents occurring toward LGBTQ students in Isla Vista and on campus.

The event addressed various topics related to hate crimes, including education about hate crimes and incidents on campus, how to identify micro-aggressions, which is a form of subtle discrimination, as well as how to report hate crime incidents and provide support to victims of hate crimes. Facilitated by RCSGD Diversity Education and Outreach Coordinator and fourth-year communication and black studies major Kashira Ayers along with second-year biology major Manny Suarez, the interactive workshop required participants of the program to examine their behavior during cases of micro-aggression on campus and in I.V.

The presentation opened with statistics taken from a campus climate survey from the academic year of 2013-2014, stating 61 percent of genderqueer respondents, or students identifying as neither male nor female, and 44 percent of transgender respondents stated they had experienced offensive, hostile or intimidating conduct, while 35 percent of genderqueer undergraduate students had seriously considered leaving the university due to these incidents.

Suarez said these numbers are alarming and said it is important for all individuals to be able to express themselves without fear.

“This is our home and shouldn’t we be able to feel safe in our own home?” Suarez said. “It’s really sad to see that people don’t feel comfortable where they should be comfortable.”

“So to respond to a witnessed micro-aggression … ask inquisitive questions. So what we mean by inquisitive questions is, ‘Oh, why do you think that?’ or ‘Why do you say that?’” Suarez said. “If I say ‘Oh, that’s so gay’ and then she would respond …” RCSGD Associate Director Klint Jaramillo said the program attempts to reach out to those who want to help create a more inclusive campus environment.

“Ally is not a title that anyone can carry, but rather an action,” Jaramillo said. “This specific workshop highlights how you can utilize tools to intervene and make sure that we all have a welcoming and inclusive space for all types of people.”

Jaramillo also said taking measures to address hate crimes in I.V. is crucial to the goals of RCSGD.

“It’s crucial. We’re trying to figure out how we can get our allies involved in preventing hate crimes and homophobia within a specific sector, that would be Isla Vista,” Jaramillo said.

Fourth-year psychology major Sierra Tau Tau Pele said she believes in the importance of having dialogue on the challenges faced by LGBTQ individuals.

“This is important because there are hate crimes and hate incidents everywhere,” Pele said, “It needs to be addressed.”