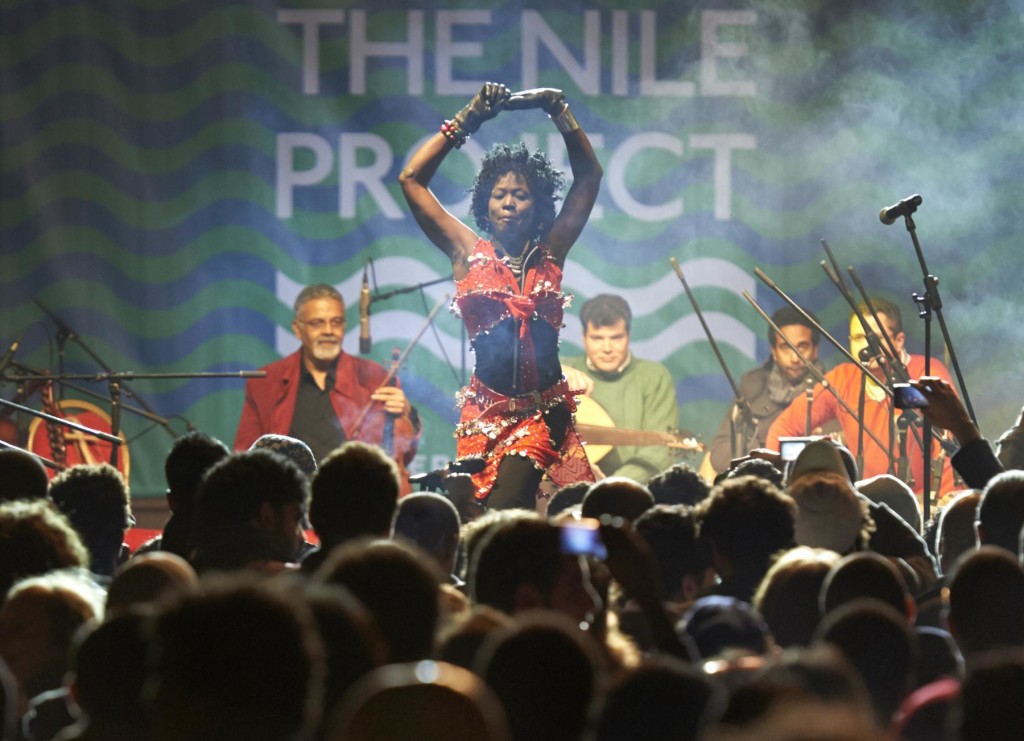 The Nile Basin, holding 11 countries that inhabit the land bordering the Nile River, is in trouble. Climate change has led to a dwindling Nile water supply, pitting the people of the neighboring countries against each other in order to ensure that water is being equally distributed. Just recently, Ethiopia sparked up controversy with the construction of a colossal dam that Egyptians fear may rob them of a majority of their drinking water. In other words, what has united these countries — the Nile, the connecting lifeline — has also managed to break them apart.

Two years ago, 18 musicians from several different east African countries sat together on a field in Aswan, Egypt. Their dialogue did not delve deeply into the political turmoil that was happening, nor did cultural clashes occur.

Instead, the unlikely group talked music.

This rare gathering was sparked by a coincidence in 2011, when Egyptian ethnomusicologist Mina Girgis and Ethiopian-American singer Meklit Hadero — old friends — ran into each other at an Oakland concert for an Ethiopian funk group, Debo Band.” Afterwards, the pair grabbed a beer and conversed about music.

“How come I grew up in Egypt on the Nile in Cairo for 22 years and never was exposed to Ethiopian music?” Girgis said he asked himself after the performance. “It’s a question that most Egyptians don’t ask themselves: Why are we not exposed to Ethiopian cultures even though they share a river with us? That incited [Hadero and I] to go start a process that helps expose audiences of the 11 Nile countries to the cultures of their neighbors through their music.”

Thus, the Nile Project was born. The group of 18 musicians convened in Aswan to collaborate on music that would bridge the cultural gap dividing each country. This music would paint a picture of unity instead of focusing on the political aspects. And this union is clearly heard; each song carries a little part of each country, whether it be Egyptian vocals or a thunderous solo on Kenyan drums.

But essentially, the project is not just about music.

“The project is more about a water conversation … a water conversation that we were not having in the Nile basin and we were hoping to inspire through this music,” Girgis said during the concert. “We thought we would start with university students because they’re the ones that are going to be there in 20, 30 years. They’re the ones that are interested in learning more about these issues and interested in having this dialogue.”

Indeed, the Nile Project is touring college campuses all over the United States from early February to May 2015 in hopes of catalyzing a movement with the future leaders of our nation: college students. Nile Project members host workshops in each college that they tour, encouraging students to work together and pursue ways to lessen our impact on the environment.

On Feb. 11, the coalition graced Campbell Hall with colorful traditional clothing, a contagious energy and magnificently curly hair across the board.

During a moment of small talk between songs, one of the musicians held an unfamiliar string instrument shaped like a crescent. “This instrument is called ‘Adungu.’ Everyone?” he addressed the crowd, and everyone echoed the name back. He continued, “It translates to ‘my beautiful friend.’ So it sounds like this.” There is no doubt that the harp-like instrument is referred to as “my beautiful friend” for a specific reason, because he proceeded to play one of the most unexpectedly beautiful melodies I have ever heard.

Of course, this was only one of the many moments in which the Nile Project rendered me speechless. The musicians played their hearts out, danced vibrantly and brought warmth to what was otherwise a concert hall plagued by too much air conditioning. Indeed, this was not just a concert that was strictly music — it was a gathering of familiar people, a sharing of love and a glimpse at true innovation.

Learn more about the Nile Project at their site, nileproject.org/