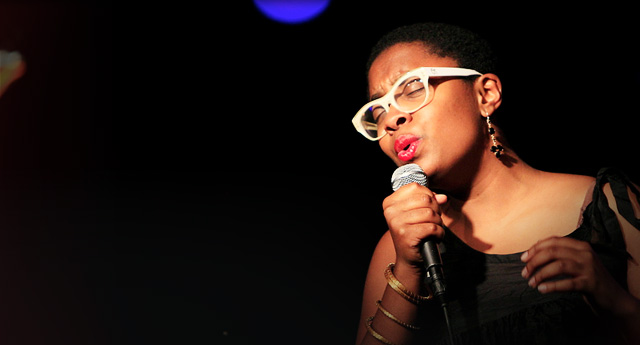 One couldn’t help but smile as Cécile McLorin Salvant walked onstage at Campbell Hall Thursday night, Feb. 12. Her demeanor was so familiar and unassuming, yet commanded attention, like someone approaching a lunch table where all her friends sit waiting for her. In a taupe dress, pink patent sandals, white glasses and red lipstick, Ms. Salvant looked at once classic and unique.

The packed house was comprised mostly of older Santa Barbara bohemians. Salvant’s manner and incredible musicianship had them eating from the palm of her hand from the start; every joke received uproarious laughter, every solo awed applause.

After her first song, Salvant greeted the crowd in a feminine and surprisingly quiet speaking voice. This only made her more intriguing. As Salvant introduced her band, the crowd was like a group of school kids listening breathlessly to the girl with the latest gossip.

The singer informed us that the next song was about Cinderella’s stepsisters. Having spent hours preparing for the ball, they are ignored by the prince in favor of Cinderella and become absolutely consumed with envy. “So I thought the song was perfect for me,” Salvant said, to much laughter from the crowd. She kept the crowd laughing throughout the song with her mastery of theatrical delivery as she sang about the sisters’ desire to do physical harm to Cinderella. The multitude of attitudes Salvant could elicit from a single phrase was impressive.

“The Stepsisters’ Lament” was followed by “John Henry.” As on her album, the song started with nothing but Salvant’s voice backed by a foot-tapping bass line. Then, the pianist added some bell-like notes as the drums started in, all softly at first and then growing in intensity. The song was visceral and enthralling. A fan in the audience, alumnus Bobbie Bush, enjoyed her “intriguing take on classical songs” and “well-rounded set list.”

Salvant often stepped back from the mic to let her band take solos.  Pianist Aaron Diehl and bassist Paul Sikivie delivered masterfully. In these moments, the singer deferred attention totally to her band, receding from the spotlight and tapping her hand along to the beat.

Salvant discussed her love of Bessie Smith, the “Empress of the Blues,” saying, “She used to sing all kinds of blues … and this one is about food.” The song was a hilarious jaunt full of food-related sexual innuendos, including gems like “I crave your round steak.”

The Florida-born singer has an impressive resume for being just 25; she won the Thelonious Monk Jazz Competition in 2010 and received a Grammy nod for her album WomanChild in 2014. Her incredible voice and mastery of tone have earned many critical accolades and performances in prestigious venues across the nation.

Second-year economics and math double major Sydney Belcher was particularly impressed with Salvant’s range of both pitch and expression. “I loved when she sang really high and low and all the types of tones she could do,” Belcher said.

Salvant and her band received a standing ovation after their last song, a classic from “West Side Story.” The crowd continued applauding enthusiastically until they returned for an encore of “On The Street Where You Live” from “My Fair Lady.” Overall, Salvant delivered an extremely enjoyable performance; her musicianship and theatricality were brilliant, and her personality made the show feel authentic and personal. One hardly notices the time pass listening to Cécile McLorin Salvant.