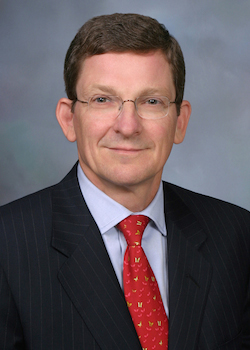 Alumnus and former U.S. Special Envoy to Afghanistan and Pakistan Marc Grossman visited campus this past Friday to speak to students at the global studies department about his 30-year career with the U.S. Foreign Service.

As a former diplomat and government official, Grossman also worked as the U.S. Ambassador to Turkey, the Assistant Secretary of State for European Affairs and the Under Secretary of State for Political Affairs, which is the State Department’s third ranking official. As Under Secretary, Grossman assembled diplomatic support for the U.S. after the September 11 attacks, and as U.S. Special Representative for Afghanistan and Pakistan he supported the Afghan peace process and worked to improve U.S.-Pakistan relations.

Grossman, who was born in Los Angeles, received a degree in political science from UCSB, and said one of his professors saw his potential after two years at the university.

“He arranged for me to go on the Education Abroad Program,” Grossman said. “I’d never left the state of California before, and hours later we landed in London.”

Grossman then got his master’s degree in international relations at the London School of Economics and Political Science before returning to Santa Barbara. Grossman said after returning and working in Santa Barbara for several years, he sought a career that would cater to his passion.

“I came back to Santa Barbara, where I worked for three years — a year in politics and a couple years selling things door to door, which turned out to be great experience,” Grossman said. “One day I said to myself, I have got to find a profession that is going to pay me to live abroad and be curious about how other people live.”

Grossman said one of his biggest accomplishments during his time in the Foreign Service was working to dissuade the Turkish government from using torture when handling prisoners.

“We were able to convince Turks that this kind of abuse — the systematic abuse of people — was just wrong,” Grossman said.

According to Grossman, diplomacy is always changing, and he is excited to see college students majoring in fields like global studies and considering international careers.

“The world is changing so fast, and these interactions are changing so fast,” Grossman said. “I teach to a lot of brand new American diplomats, and I envy them. They are really going to lead our engagement in the world for a very long time to come.”

Grossman said students today are lucky to have more opportunities in the international field than he had when he started his career.

“If you wanted to live that kind of life, diplomacy was basically the only way to do it,” Grossman said. “The choices that you all now have with non-governmental organizations, with charities, with multilateral organizations, with businesses, with more ways that people are today employed abroad, are very exciting prospects.”

Grossman also said he hopes some students will consider a career in diplomacy for the United States.

“I hope you really will consider representing the United States,” Grossman said. “There’s no substitute for working in an office where you have the American flag flying.”

“The visit from former Ambassador Marc Grossman was very exciting and granted our Global Studies students a glimpse into the life of a leading diplomat working at the frontlines of U.S. foreign policy in extremely difficult political contexts,” Darian-Smith said.

Third-year global studies and psychology double major Edixon Puglisi said it is important that those who are “experts of their craft” convey their experiences to students.

“It is very important to pass down to new generations the keys to success in each field of study, as well as the experiences of success and failure in each field, in such a way so that we may learn from our mistakes and become more efficient and effective individuals in society,” Puglisi said.”

“For me personally it gave me a lot of perspective on what I want to be pursuing with my life,” Marshall said. “Because of the visit I’m most definitely going to be applying for the State, which is something I had only considered before.”

According to Darian-Smith, the Q&A session following Grossman’s talk gave many students insight into the nuances of a career in foreign diplomacy.

“It was a unique opportunity for students to ask the Ambassador direct questions, which he answered with candor, grace and humor,” Darian-Smith said. “Students’ minds were opened up to the contradictions and unpredictability of navigating foreign relations across different cultures, religions and worldviews, and the visit provided an invaluable ‘real-life’ teaching moment.”