The Daily Nexus
On The Road
OTM On the Road: Taiwan Woos with Beef Noodle Soup
February 17, 2015 at 5:00 am by Ashley Lee 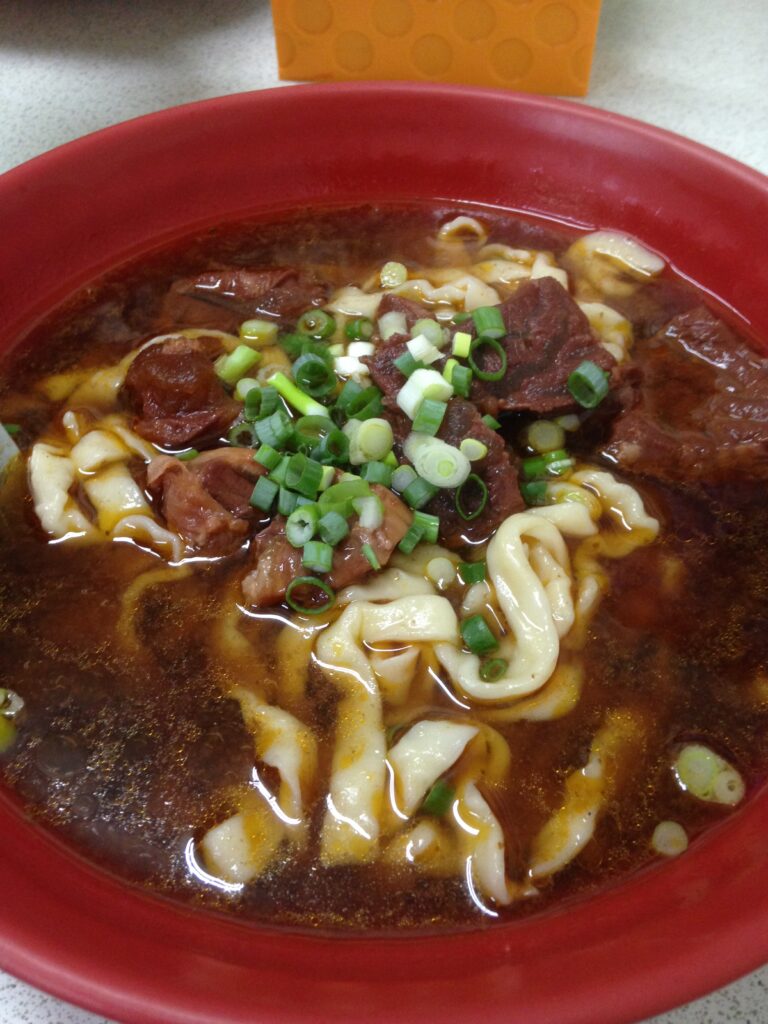 Hey everyone! My name is Ashley, and I spent just over three months in beautiful Taiwan. I attended class at National Taiwan Normal University, or Shi Da (師大), in Taipei, so I spent most of my time there. Now I know what you’re thinking: night markets. Yes, while I frequented the night market near my school and dabbled in many others around the island, I’m going to talk about one of Taiwan’s most famous dishes — or rather, soups — instead. That’s right, I’m talking about beef noodle soup (niu rou mien or 牛肉麵). Don’t forget the pickled cabbage (suan cai or 酸菜).

While beef noodle soup may have its origins in Mainland China, it is very symbolic of Taiwan, and has quite a cult following. There’s even a festival just for beef noodle soup. It’s awesome. There’s different variations of beef noodle soup — you can get beef tendon, beef brisket, no beef, spicy broth, super-spicy broth, clear broth (not spicy), different widths of noodles, etc. It just depends on where you go eat.

My first bowl was around 100 New Taiwan Dollars (NTD) or $3 USD I was pretty jet-lagged and tired when I ate it; it was probably within my first week living in Taipei. The beef noodle soup shop was some hundred meters away from my hostel, and I went with some new friends. The bowl was huge, like American portion-sized huge. I was stoked. The beef was a little on the tendon-y side and chewy, but there was so much I had to give some to a friend to finish. The noodles were the perfect consistency, and the broth had a subtle spicy taste, just the way I like it.

A few weeks later, I had moved into an apartment and had started class. (Yay!) I tried another beef noodle soup place, a little further from my apartment in Taipei and closer to campus in the Yongkang (永康) area. The standard bowl was a little more, about 120 NTD (still cheap at around $4 USD), but my teacher recommended it. The noodles weren’t the traditional hand-pulled kind (oh yeah, most noodles are hand-made); they were knife-cut, meaning that they had an inconsistent shape much like when you pull off string cheese — it’s not a uniform string. The meat had a much better quality, however, and it really opened my eyes as to what I was missing.

So a couple of months went by. Class got harder. The weather got colder. But I adjusted to the culture better, realizing that nothing satisfies quite like a steaming bowl of beef noodle soup. I sampled more beef noodle soup shops in the area, had some in other places of Taiwan while traveling around the island, and went back for more at some familiar stops near my home base.

Until I found the mother lode of beef noodle soups, that is. That’s right, a friend of a friend recommended a little shop, tucked in a narrow alley a little ways from Ximending (西門丁), the popular night market area. The place was apparently so popular, there were signs saying “no photography allowed” in front of the kitchens. A little sketch, but oh well. I sensed that I was in for something good.

The eating area was on the second floor, with the kitchen on the first floor. This is common in Taiwan, especially in the bigger cities such as Taipei since rent space is limited. The eating area was small, as is normal, with the menu simply written on the wall in big characters. I got the standard beef noodle soup. It was probably the most expensive bowl of beef noodle soup I had ever had (in Taiwan, at least). But thankfully, the bowl was large, with ample amounts of high-quality beef. At this point, my stomach had adjusted to eating noodles more, so I had no problem finishing my bowl. I realized while eating at this place, all the others I had visited previously were by far inferior.

I have been back in the good old USA since the day before Thanksgiving, and with the cold weather, even in SoCal, I still crave a hot, steaming bowl of beef noodle soup. It is truly something worth burning your tongue for, because damn, it’s so good. Taiwan, I will be back.