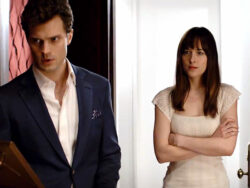 Now, to this film’s credit, it is not as bad as the book. The directing, cinematography and soundtrack are fine. All the “inner-goddess” monologues (and all inner monologues in general) are not present, and Christian Grey is not as much of an overt jackass here, but the key phrase is “not as much.” However, saying this movie is not as bad as the book is like saying genital warts are better than herpes. One of them may not burn, but they are both a pain in the ass to have in the first place.

As mentioned before, E.L. James’ Fifty Shades was originally a Twilight fanfic, and it shows. Anastasia Steele is Bella Swan sans the suicidal tendencies, but she still makes just as many stupid decisions and is about as complex as a Rubix cube with only one color. Same goes for Grey, who can be summed up as a kinky dick. While there are some implications of a darker past — like an unhappy childhood and a teenage love affair — these details mainly seem to be there to trick you into thinking Grey is complex, because the film barely elaborates on these histories.

But it doesn’t matter since complexities don’t excuse the fact that E.L. James wants you to sympathize with a man who breaks into his girlfriend’s house to have violent sex with her as a reaction to rejection. In short, there is about as much chemistry between Grey and Steele as air and more air. If this is romance, getting up to go to the toilet is exercise.

But, hell, you don’t care. You’ve already made up your mind about whether or not you’re going to see this. And if you do, you just want to watch kinky sex. Well, I got news for you: it’s a letdown. Yes, there is sex. But it’s tamer than you’d be led to believe. None of the sex scenes last longer than two minutes, and there are so many cutaways and fast camera movements during the BDSM (which isn’t represented properly, ask anyone who actually practices it), that you’d get more stimulation out of reading the book instead. And if you were hoping to see how well-endowed Jamie Dornan or Dakota Johnson is below the belt, prepare for disappointment. It’s pretty much a lose-lose situation.

Alex Wehrung needs better stuff to do on Fridays than go see crap like this.

Love the review! I had no idea that there was someone else reviewing haha. But this film was deserving of two roastings!