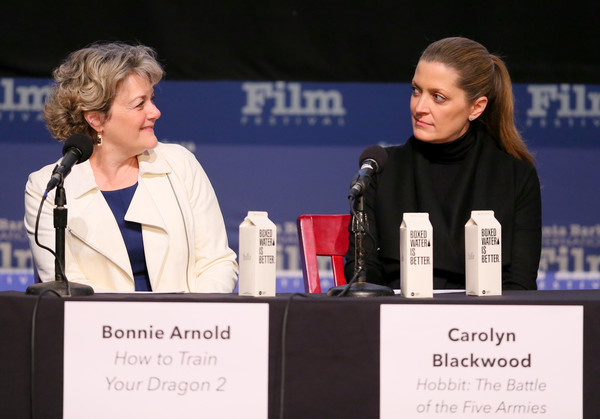 The phrase “women in show business” conjures a variety of onscreen stereotypes: the distressed damsel, the young clandestine coquette and the sensual temptress, amongst others. The cause for this can be traced off-screen, where a vast majority of filmmakers and executives are male. The film industry is notoriously difficult to break into, and for an industry that prides itself on progressiveness and liberal values, it is still staggeringly male-dominated in the year 2015. On Feb. 7, six successful women in show business formed the women’s panel at Lobero Theatre and made a dent in this norm, hopefully causing a ripple.

Bonnie Arnold, Carolyn Blackwood, Kristin Hahn, Rory Kennedy, Aneta Kopacz and Kristina Reed answered questions about their recent films, as well as their careers and what it means to be a female filmmaker and producer. Not only was each woman successful in finding their way in a male-dominated profession, but each panelist told a story of how she enabled the image of a strong female figure either on the screen or in her own life.

The introduction of a strong female archetype was exemplified in the films of Bonnie Arnold and Carolyn Blackwood, producers of “How to Train Your Dragon 2” and “The Hobbit.” While the “How to Train Your Dragon” book series is devoid of a strong female character, the filmmakers felt it was important to incorporate one into the film. Thus the role of Astrid, a fellow teenage Viking, was born. The role of Galadriel in “The Hobbit” also epitomized a strong female figure. Of Cate Blanchett’s character, Blackwood said, “she kicks a lot of ass” and this was “very, very intentional.” Arnold neatly summed up the need for this type of depictions when she said: “Boys and girls need to see women doing strong things, because if you don’t see it, you can’t even imagine it.”

Kristin Hahn, producer of “Cake,” and Aneta Kopacz, creator of the short film “Joanna” chose to portray women as more realistic heroes in their films. In “Cake,” Jennifer Aniston and her producing partner (and spitting image) consciously decided to center the movie on a woman living with chronic pain, a demographic that is hardly ever portrayed in films. Kopacz tells the story of Joanna, a young mother she read about in an article who was diagnosed with cancer. Kopacz wanted to tell her story, focusing on the bravery and humor exerted in her everyday life with her son, rather than her terminal condition.

A delightful high point was when Kristina Reed, who worked on the Disney short film “Feast,” a silent animation starring a puppy and a lot of food, went into detail about what goes into making a Disney short. As everything Disney, there are “big stakes and big budgets,” but also a more fun and inclusive attitude surrounding shorts. Everyone in the company, including the security guards and secretary, can pitch their ideas. The winning idea for “Feast” was inspired by an employee who was able to recount his past year through a full account of his 365 dinners using the 1 Second Everyday app. The short meal glimpses were able to tell stories of the year, such as when he was busy on projects and busy with celebratory occasions. Thus the food-based premise of the film was born.

In contrast to aforementioned indulgent narratives, Rory Kennedy joked that her films range from “depressing to really depressing.” In line with her family’s legacy, she created a documentary recounting the last 24 hours of the Vietnam War. The film premiered at Sundance Film Festival and left the audience in tears. Kennedy began a career as a reporter, and didn’t think about becoming a filmmaker until she made her first documentary in an effort to expose the untold truth about pregnant women addicted to crack who often cannot find help, in spite of their condition.

The end segment of the panel consisted of more humorous banter. While discussing the role of male mentors, Hahn chimed that they’re “especially appreciative if you make them look good,” to which Arnold quipped, “I hire that way now.” The cherry on top of the event was a parting gift of postcard sets each donning the countenance of historical women such as Frieda Kahlo and Maya Angelou. While the panel itself was certainly inspiring and uplifting, it would have been nice to see a hint of the racial diversity so prominent in the postcards up onstage.

All the best Jennifer Aniston.