The Daily Nexus
News
IVTU To Picket Apartment Evictions
February 12, 2015 at 5:02 am by Alyssa Schmidt 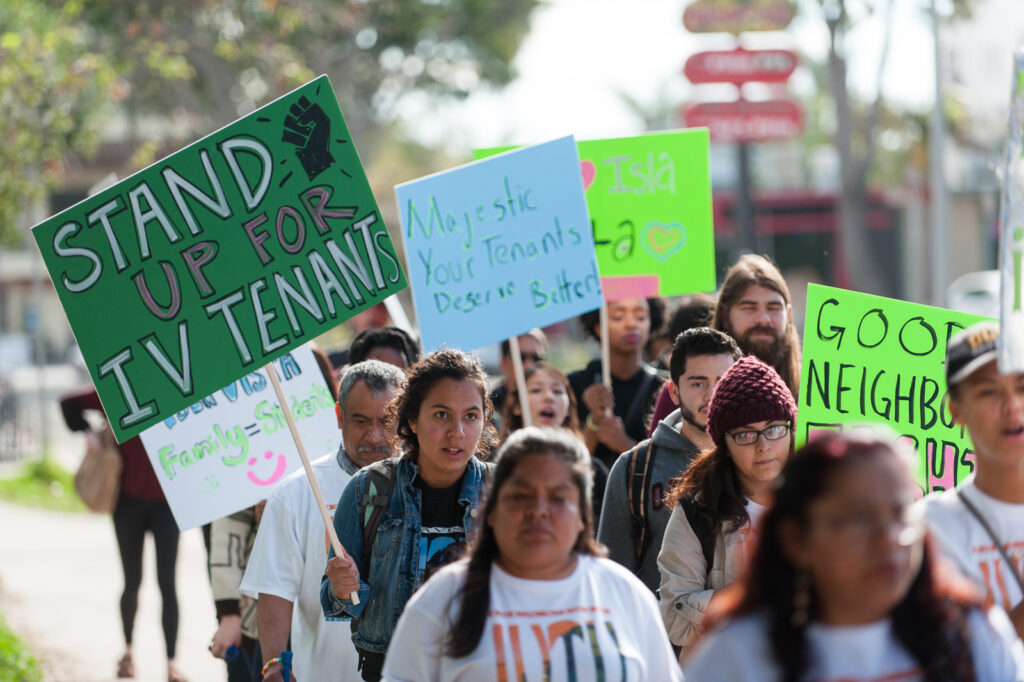 Earlier this month, I.V. Tenants Union organized a community march to Abrego Villas. They plan to do the same thing this Friday. Daily Nexus File Photo

The Isla Vista Tenant Union (IVTU) plans to lead a picket on Friday at 12 p.m. beginning at the Pardall Center as part of their “Tenants Reclaiming Isla Vista” campaign protesting the eviction of six Latino families from their homes at 6754 and 6764 Abrego Road in October.

IVTU’s campaign calls for Majestic Asset Management, Inc., the property management company of the Abrego Villa apartments, to abide by Santa Barbara County Ordinance No. 4444 which states that landlords must provide relocation funds to families evicted from rental units that are deemed unsafe to occupy. The evicted tenants have filed small claims lawsuits.

IVTU President Andrey Bogdanov said the aim of the march is to educate the community on the ongoing issue of mass evictions in I.V. and call on Majestic Asset Management, Inc. to grant the evicted tenants relocation benefits.

“We would like to see the tenants as a united force, fighting for better housing in Isla Vista,” Bogdanov said. “These tenants were unable to defend themselves on their own because greedy out-of-town investors and the community should stand up for them because it can happen to any one of us. That is the reality.”

We talk about solidarity in Isla Vista, well this is the time to really see what that is. – Brandon Baker, I.V. resident and recent UCSB graduate

In a previous interview, President of Majestic Asset Management, Inc. Brian Lezak said Majestic complied with all the rules and regulations as outlined in Ordinance 4444 and did not violate any laws.

“Unfortunately, the facts that have been publicized have been significantly distorted and are not an accurate reflection of each individual’s situation, and we intend to discuss these facts openly when given the opportunity to do so in the proper forum,” Lezak in an email. “We will defend their position in court which is the proper place.”

According to Lezak, Majestic wants to give back to the I.V. residents by providing apartment housing that is clean and affordable, and the Abrego Villas renovations were in part made to reduce water consumption.

“The management willingly made additional changes which will also allow the property to use other utilities more efficiently, which again is in support of the conservation goals of Isla Vista and Santa Barbara,” Lezak said in an email.

Fourth-year sociology major Andrew Prieto said he plans to participate in the picket to support the local community and “make a statement” about what kind of treatment residents are willing to accept from landlords.

“Those removed from their homes will get the justice and equal treatment they deserve,” Prieto said. “The point of the rally isn’t to attack people or attack the property companies but bring attention to the injustices and hope that attention will foster a change.

Brandon Baker, an I.V. resident and recent UCSB graduate, said he plans to attend the march to fulfill a desire to create positive change.

“I just didn’t think it was enough to read about the eviction and sit at home,” Baker said. “I wanted to actually be a part of the movement or process to bring change. We talk about solidarity in Isla Vista, well this is the time to really see what that is.”

Baker said the Abrego evictions present another example of poor treatment of resident in an environment in which students are already abused by landlords who charge too much for rent in Isla Vista.

“Rent’s already high enough and I have to buy food and gas and stuff too,” Baker said. “If we let them do this, it sets a precedent for other realtors to do the same thing. I’m already paying a lot of money to live in a shithole. I’ve literally seen my landlord last year pull up in a corvette … Students are being taken advantage of and this brings attention to that unfairness.”

Bogdanov said IVTU plans to extend their campaign for fair rights for tenants beyond I.V.

“We will be working to improve the legislation, working with our partners in the county as well as … working with statewide legislators,” Bogdanov said.

A version of this story appeared on page 1 of Thursday, February 15, 2015’s print edition of the Daily Nexus.