The Daily Nexus
The Brew Review
Bomber Diary 2: Testudo Gets Tight with Shmaltz and Terrapin
February 11, 2015 at 5:00 am by Jordan Grace 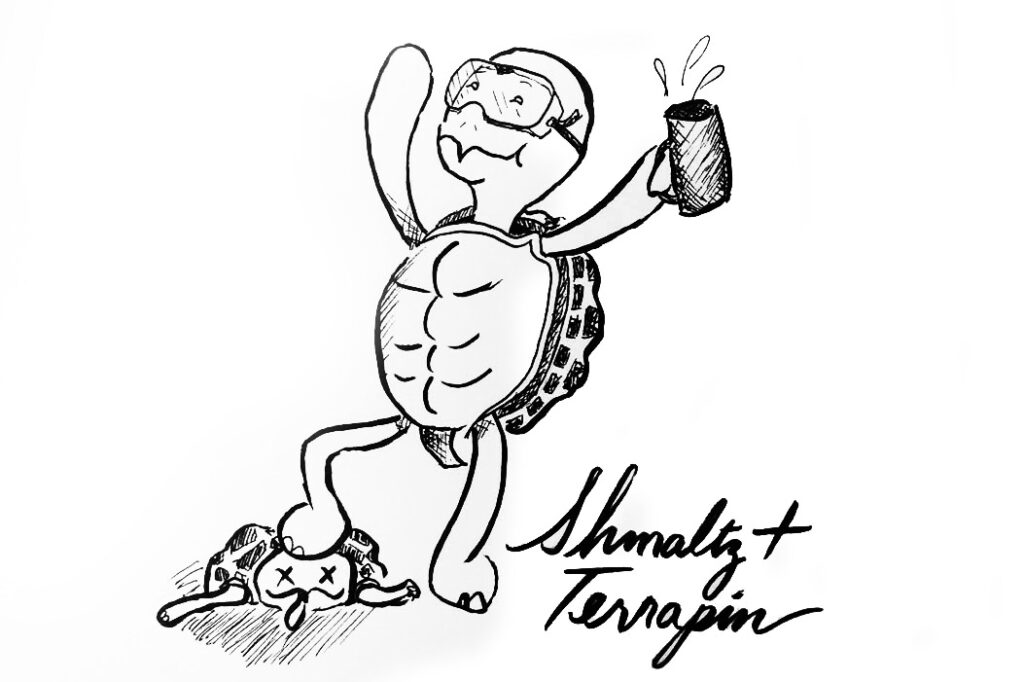 Testudo was a happy turtle who worked in a medical research lab dedicated to eradicating the shell-eating bacteria known as Streptotortois Pyogenes. Like most lab turtles, Testudo lived on a diet of plants, insects and coffee. His favorite coffees were smooth light roasts. Unlike most turtles and humans, Testudo didn’t lie to himself about liking dark roasts because he had too much self-esteem.

Iced coffee was one of Testudo’s favorite coffee innovations, as his taste buds had become very sensitive ever since he quit smoking. Every morning before work, he would carefully brew himself a delicious cup of iced coffee. Testudo’s favorite part of the morning was enjoying his iced coffee while he sat at his desk and prepared for the rest of his day.

One morning Testudo’s turtle nature got the best of him and he found himself running late, so he asked his friend Jay to pick up some iced coffee for him from somewhere good.  When Testudo finally made it to work, still feeling sleepy, there was nothing he wanted more than his iced coffee. And what do you know: there was a nice tall cup of iced coffee sitting on his desk. Jay was such a good friend. Testudo took one sip of his coffee and his mind was blown. This was the weirdest, most delicious coffee he had ever tasted! It tasted like chocolate almost as much as it tasted like coffee. It was oddly fizzy as well. Testudo couldn’t help himself and gulped down the whole cup. Fizziness aside, it went down very smoothly, and despite being pitch black, it tasted slightly nutty, as if someone had added hazelnut creamer.

Testudo felt rejuvenated! He went right to work in the lab, testing infected turtle blood to see if the treatment he had been working on was effective. Testudo always loved his job but work had never been this much fun! As he watched the centrifuge spin his samples around, Testudo couldn’t stop laughing as he imagined all of the little pathogens in his samples being destroyed by his treatment. He laughed so hard that he began to bang on the table with his turtle hands. 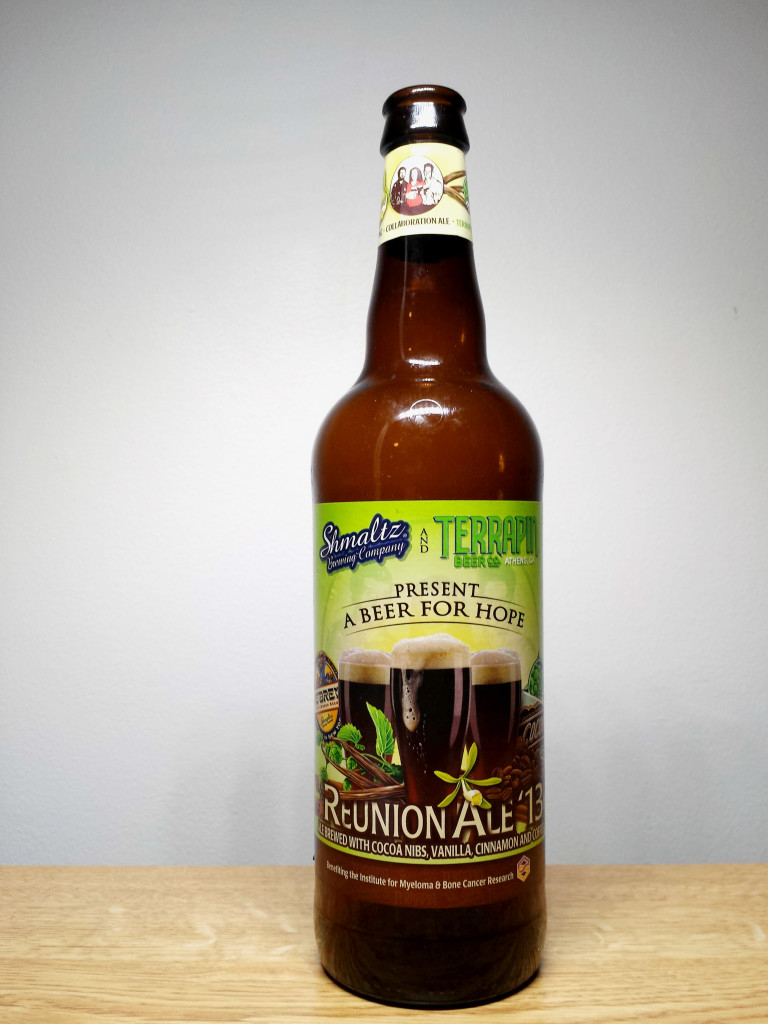 Suddenly, vials of blood were flying out of his centrifuge and exploding all over the other lab turtles.

“Testudo, you idiot!,” they screamed as he ran as quickly as turtlely possible from the lab, turning bright red from embarrassment. “I’m not an idiot,” he angrily thought to himself. Testudo went back to his desk where he found Jay enjoying a laugh of his own.

“Did you enjoy your beer?” Jay chuckled as he handed Testudo a bottle.

Testudo read the bottle. “Schmaltz and Terrapin present a beer for hope. Reunion Ale ’13. Ale brewed with cocoa nibs, vanilla, cinnamon and coffee.” Testudo was furious! This coffee didn’t taste like vanilla or cinnamon at all! He smashed the bottle across Jay’s face and shoved his fingers into the bloody gash left behind. Grasping at turtle meat and loose skin, he pulled Jay’s face right next to his own and shrieked, “What did you do with my vanilla and cinnamon?!”

Testudo was in a drunken rage. Confused and angry, he dropped Jay onto the ground, picked up the half-shattered bottle and stormed back to the lab. The rest of the lab turtles were still cleaning up the mess he had made a few minutes earlier, when Testudo smashed down the door, huffing and puffing and spitting and screaming unintelligibly at his coworkers. The effects of the not-terribly-boozy eight percent alcohol by volume beverage finally reached their peak, and Testudo charged toward his terrified coworkers and blacked out.