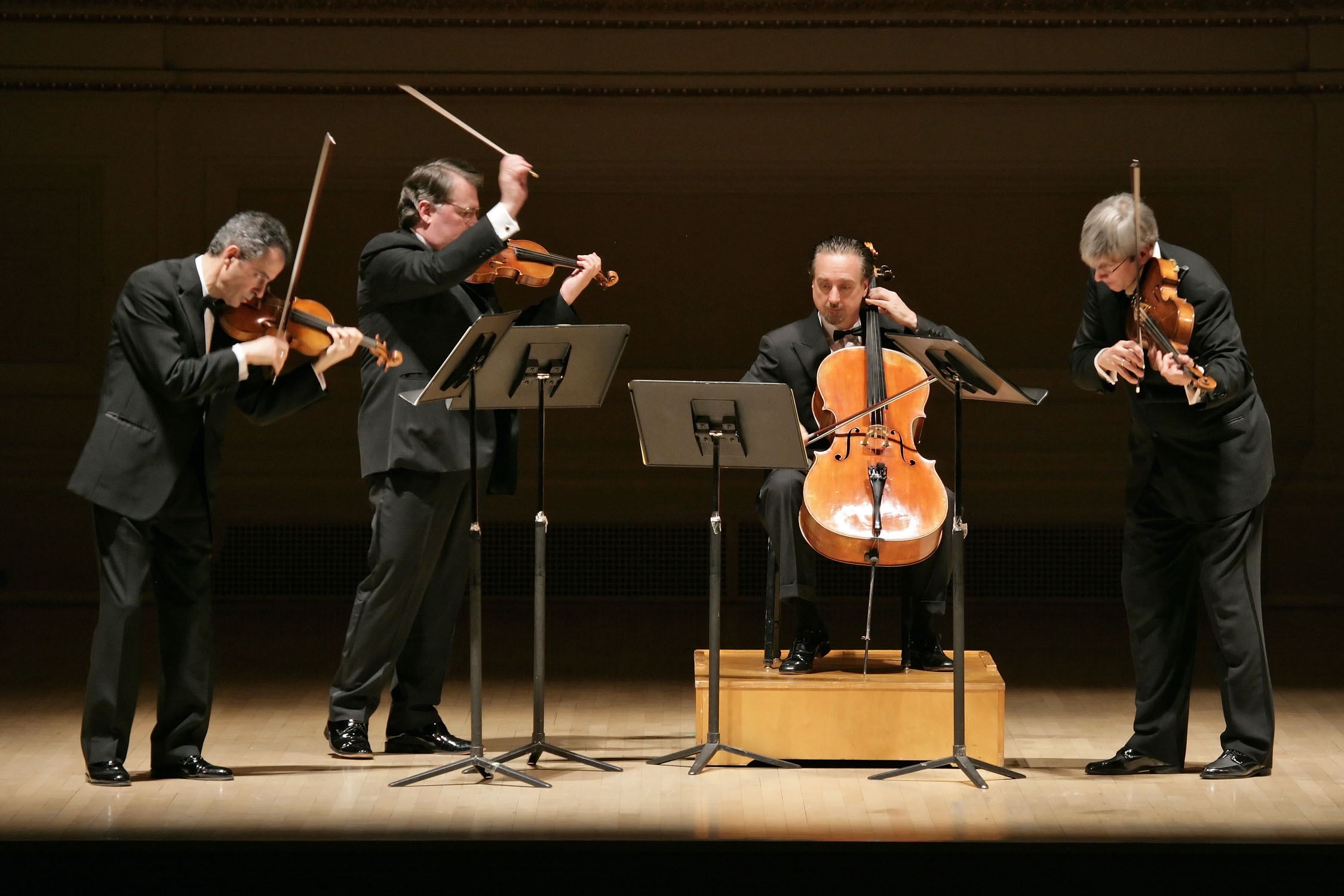 The crowd silenced as the four beaming, salt-and-pepper-haired string players strode across the stage toward their spotlight in matching black and white suits. On Feb. 7, young and old gathered for an evening of classical music with the prestigious, Grammy award-winning Emerson String Quartet at Campbell Hall.

The chamber includes violinists Eugene Drucker and Philip Setzer, violist Lawrence Dutton and their newest addition, Paul Watkins, on cello. Watkins was seated on a raised podium center-stage while the other members stood on their feet throughout the night, allowing animated movements.

The quartet’s first selection of the night was none other than Mozart’s String Quartet in G Major, K. 387. A classical piece for a quartet’s performance, this selection featured contrasts of loud and soft segments, which kept the audience engaged throughout. Unlike many selections of the time, this piece conveyed a sense of unity by achieving a musical conversation between the string players.

Emerson String Quartet seemed to have conveyed that sense of unity well, as classical-music admirer Alice Lee applauded their synchronization abilities. “I was extremely impressed by their togetherness. That really defines a string quartet, you know, whether or not they speak to each other through their instruments,” Lee said in an interview after the show with the Daily Nexus.

The audience favorite of the night was Ravel’s String Quartet in F Major, a pleasant deviation from the norm of classical string quartet selections. The song allowed the first violinist, Philip Setzer, to share a warming melody with the audience. Then, the second violinist and violist played in synchrony as the piece led up to its climax.

Pre-Biology major, music minor and bass player Ian Hay vouched for the audience’s opinion. “Ravel is a really interesting piece. It has a lot of emotion to it and lots of different dynamics and contrast. It just really appealed to me on an emotional level,” Hay said. Their performance for this selection earned a roaring standing ovation and murmurs of compliments throughout the crowd.

Emerson String Quartet’s final selection was Beethoven’s Quartet in E-flat Major, Op. 127, a faster, finale-appropriate piece. Based off of Beethoven’s 9th Symphony, this piece featured darker-sounding chords and a more dramatic harmony. The group accentuated the melodrama through their slight pops, sways and leans.

Hay also mentioned the impressiveness of the group’s harmony. “I’ve seen lots of quartets and lots of orchestras. It seems that [Emerson String Quartet] has a lot of dynamic together,” Hay said. “You can tell that they’re communicating with each other through the course of the piece and they seem to be following each other really well. I think that’s a really nice thing to see because a lot of the time you’ll see [a quartet] almost sterile up there.”

Following a few rounds of roaring applause and standing ovations, the quartet gifted an encore. Violinist Eugene Drucker informed the audience that the group had chosen Mozart’s unfinished “Fantasia,” composed on June 22, 1680. An audible gasp rippled through the crowd as Drucker introduced the piece’s origins.

The four added personality to these classical pieces, appropriately flavoring a night of pure classical music; and, with a purposefully simplistic stage of black and white tones, the audience was able to better understand beauty not with the eyes but with the ears.